Has Jason Kidd been a Failure in Dallas? 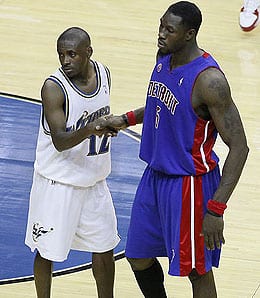 Ben Wallace, right, had a fine comeback, but was it his swan song?

While Steve Nash and the Suns battle it out with the Lakers for the right to play the Boston Celtics in the NBA Finals, once again the Dallas Mavericks look on after suffering yet another early playoff exit.

This is becoming quite a habit in Big D, and it’s a trend that has not been reversed with the addition of veteran Jason Kidd over two years ago.

In 2005-06, the Mavericks did make it to the Finals, only to lose to the Heat. But after getting shocked by the Warriors in the first round the following spring, Mark Cuban finally decided some changes were necessary. That’s why at the trading deadline the next season, Dallas dealt promising young point guard Devin Harris plus a package of players and picks to New Jersey for Kidd, who earlier in the decade had led the Nets to back-to-back NBA Finals appearances.

Well, in 2007-08, it was more disappointment, as the Mavs went down in five games to the upstart Hornets. Last season, Dallas made it to the second round before being taken out by Denver with relative ease. And this season, old nemesis San Antonio prevailed over Dallas in the first round in six games.

For those keeping score at home, that makes the Mavs 8-13 in the playoffs in the three years since Kidd was brought back to Dallas. Clearly, Kidd is not the same player that in 2002 almost single-handedly beat the Celtics in the Eastern Conference Finals by recording three triple-doubles – becoming the first to do that in 35 years. Back then, he was sinking 4.2 FTs per game; this year, he only averaged one free throw made per game.

And sure, Kidd is still a great spot-up 3-point shooter, but he turned 37 last week and you have to wonder how many more chances he’s going to get at the big prize. He was rested down the stretch this year in anticipation of carrying a heavy workload in the playoffs, but that didn’t see to help, as he only averaging 8 PPG and 7 APG against the Spurs.

From a Fantasy perspective, Kidd remains among the most durable players in the game, he can shoot extremely well from downtown and his overall production improved in his second full season in the Big D. But as I mentioned, he’s getting very long in the tooth, his steals and blocks both slipped last season, and he is no longer a triple-double threat every time he takes to the court. Sure, Kidd remains one of the best point guards to own, so you have to keep rolling the dice. But one of these years, he’s going to disappoint; do you want to be the one left holding the bag?

While we’re discussing aging NBA stars that had renaissances of sorts, how about Ben Wallace? The return to Detroit definitely jolted him back to life as he enjoyed his finest season since the first year of that ill-advised (for them, not him!) four-year, $60-million contact he signed with the Bulls. Sure, his creaky old body acted up at times, and a knee problem in March afforded Jason Maxiell a chance to strut his stuff, but overall Big Ben was the defensive glue that held the Pistons together this season. Obviously, he can no longer dominate a game defensively, but he can still rebound and block some shots well enough that he was actually a bit of a Fantasy asset last year – especially since he actually scored the odd point, a real rarity for Wallace.

The question is whether he’s finished now. Both his and Kwame Brown’s contracts are expiring this summer, leaving Detroit desperately needing to select a centre at the draft, but whether one of the mainstays of the last Detroit championship run will be back or not is still anyone’s guess at this time. In fact, even if Wallace, 35, does decide to keep playing, there’s no guarantee it will be with the Pistons.

At this point, I’d suggest that if he came back and you found yourself really short of boards late in the draft, Wallace might be a decent play, but otherwise, he’s probably best employed as an in-season pickup.

By RotoRob
This entry was posted on Saturday, May 29th, 2010 at 12:40 pm and is filed under BASKETBALL, Fantasy Notes, RotoRob. You can follow any responses to this entry through the RSS 2.0 feed. You can skip to the end and leave a response. Pinging is currently not allowed.