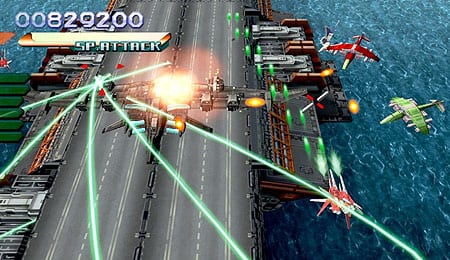 The relative calm before the Raystorm.

Thirteen years have passed since Raystorm first came out for the Sony Playstation, but Taito has dusted this vintage vertical-scrolling shooter off and given it a facelift to play on modern televisions. The result is Raystorm HD — available for both Xbox Live Arcade and the Playstation Network. It’s a game that was well received back in 1997, but have the years been kind?

The game offers two control setups: manual and auto. In manual your gun and laser are mapped to separate buttons, whereas in auto one button fires both of them. Both have a special attack that can be deployed. To do this you’ll need to fill a meter, which is done by locking onto and destroying your enemies with the laser. It’s the weapon you’ll use most often as it’s capable of hitting both aerial and ground targets, whereas the gun can only take down flying foes.

Everything handles fine for the most part, although I found it odd that in manual mode you can execute your special attack by pressing the gun and laser buttons simultaneously. This creates instances where while trying to simply fire both weapons you’ll accidentally unleash your special attack, which puts you at a disadvantage.

While the visuals in Raystorm HD have been noticeably beefed up from the Playstation days this is by no means a graphical tour de force. The ships and environments look nice and clean, but the explosions (an important element in a shooter) lack any sort of depth or impact. It’s almost like watching someone pop a balloon. Even taking down a boss looks more like puffs of fire than an actual mechanical monstrosity being torn asunder. I understand the developer wasn’t trying to reinvent the wheel here and that it stays true to the original, but this is one area where they could’ve upped the ante a bit.

The music is varied and holds up nicely, capturing that retro feel, but never overstaying its welcome. The sound effects don’t fare nearly as well, however, as the incessant beep that’s made when locking on an enemy stands out as the game’s defining noise. As with the explosions visually, your weapons don’t seem to have any audible force behind them. In fact, your main gun is silent.

Set in the year 2219, you play as Earth’s last hope against the Secilia Federation, who plans on destroying our home world. That’s the setup for Raystorm HD, but it’s not really important as it’s just a minor backdrop to explain why you’re flying an advanced spacecraft against nearly insurmountable odds. The game comes packed with just two modes — Arcade and Extra. The first is exactly what it sounds like, while the second is a remixed version released for home consoles. The Extra Mode is the stronger of the two as it simultaneously feels more challenging and less cheap.

You begin with two ships to choose from, though beating each mode unlocks an additional ship, bringing the eventual total to four. There are legitimate differences between them, which adds some replay value to a game that doesn’t have that many options. Each mode consists of eight fairly short missions, though beating them both opens up “13 Plane Mode.” This takes place over the same eight levels, but it forces you to play as three of the game’s four different ships with each control setting. In other words, you’ll fly the R-GRAY1 three times with manual controls, then the R-GRAY2 with auto, then back to the R-GRAY1 for three lives on auto, and so on. Die 13 times and you’re done. There are no continues, making it more challenging than the two primary modes.

Raystorm HD features four difficulty settings, ranging from Very Easy to Nightmare, but don’t let the names fool you as the game is challenging regardless of which option you select. I died repeatedly as many times there appeared to be no way to dodge everything that’s being thrown at you. Plus, it doesn’t help that enemies are attacking from two different elevations. They can blend with one another at times, which makes it difficult to pick up whether or not something needs to be dodged (sometimes they’re below you). I’m no newcomer to the genre, having tackled the likes of Mars Matrix and Einhander, but this can be brutal.

The game also supports local co-op with your partner getting to fly a spiffy blue version of the R-GRAY, but there’s no online multiplayer to be found. That’s a curious omission, especially considering XBLA’s free space shooter Aegis Wing supports up to four players online. Additional features include the ability to save and watch replays of your completed games as well as online leaderboards.

Aside from the upgraded visuals very little has changed with this title from its initial run. That makes the price point (1,200 MS points, US$15) feel too steep, especially when you compare what Raystorm HD offers to identically priced original titles on both XBLA and PSN. If you’re a longtime fan feel free to take the plunge, otherwise you might be better off waiting for it to show up on Deal of the Week.

By Herija Green
This entry was posted on Saturday, May 29th, 2010 at 2:15 pm and is filed under Herija Green, Video Game Reviews. You can follow any responses to this entry through the RSS 2.0 feed. You can leave a response, or trackback from your own site.