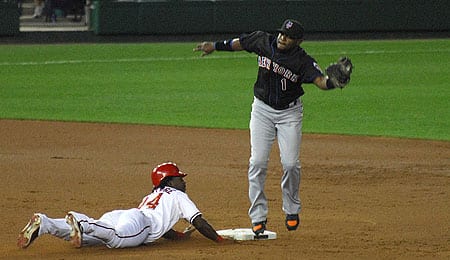 Even Luis Castillo’s defence is slipping; dump him like a psycho girlfriend, pronto!

If you’re playing in virtually any size of mixed league (okay, maybe in a league with 20 or more teams), why in the hell do you still have New York Mets second baseman Luis Castillo on your roster? No, seriously…why?

Didn’t you listen to us when we ranked him outside of the top 30 second basemen prior to the season?

Maybe you’ve just been waiting for an excuse to dump him?

Fantasy owners shouldn’t care about defense, unless of course, things get bad enough to either (a) result in a shift in position, or worse; (b) result in losing a job. Well, Castillo’s range has really slipped this year and it’s not as if his bat is screaming “keep me in the lineup, coach!”

A .235 BA in the past week? Ten measly runs in 36 games from a player who has almost exclusively hit in the two-hole? Holy shit, that’s bad, and yes, I understand that’s a reflection of the Met offense, but come on! New York isn’t exactly setting the world on fire, but is still in the top half of the NL in runs scored.

Sure, Castillo is on pace for another 20+ SB-season, but who freaking cares? Steals are a dime a dozen these days, and besides, if this heel injury really does linger (as health maladies have tended to do in Castillo’s career), how often do you think he’ll be running?

He’s a 34-year-old at a position where players have traditionally faded fast after the age of 32 or so. He’s sporting a butt-ugly 640 OPS – his worst ever as a full-time player and you know the Mets would sure as hell love to rid themselves of him.

In fact, that’s part of the problem. Everyone knows the Mets have been trying to deal Castillo for the past couple of years and they are working the phones again now. Colorado might be desperate enough to bite (for an Andres Galarraga bobblehead and a case of Rolling Rock, perhaps?), a move that could salvage Castillo’s value to an extent, but I’m not holding my breath on that one.

What they should be doing is dumping Castillo’s ass and taking a chance on either a youngster with upside (Reid Brignac) or an available veteran who is delivering some actual value (Jeff Keppinger).

By RotoRob
This entry was posted on Saturday, May 22nd, 2010 at 2:12 pm and is filed under BASEBALL, Daily Dump, RotoRob. You can follow any responses to this entry through the RSS 2.0 feed. You can leave a response, or trackback from your own site.