How Hot is that Seat, Kenny Williams? 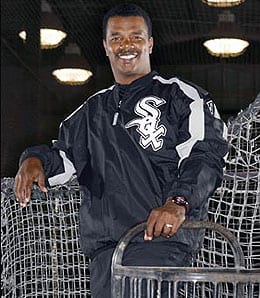 The way his White Sox have started the season, GM Kenny Williams doesn’t have much to smile about.

In an interview that will be broadcast Wednesday on Comcast, Chicago White Sox General Manager Kenny Williams said that if his team doesn’t win the World Series in a given year, he’s rooting for the Cubs to take home the hardware.

As if this blasphemous banter isn’t enough for immediate removal from his position, Williams’ charges seem to be doing their best to undermine his job.

It seems like an awful long time since the 2005 World Series winning team, doesn’t it? And while the Pale Hose took home another division title in 2008, last year, they sunk to 79 wins. The way things are going this season, they’re going to be lucky to make a run at that total in 2010. The team won on Opening Day, but that’s the only time they’ve been above .500. By late-April, the Sox found themselves at a putrid 5-11, and have only managed to go 7-7 since.

As a result, they have fallen 4.5 games behind Detroit for second place in the AL Central and already find themselves in a nine-game hole in the AL Wild Card race.

The offense is sputtering, ranking dead last in the AL in batting average, thanks to five regulars batting under .220 (Carlos Quentin, Gordon Beckham, A.J. Pierzynski, Juan Pierre and Alexei Ramirez). How much do you think opposing pitchers are licking their chops when they get to face a lineup like this? Fantasy owners need to take note and trust their otherwise marginal starters when they face Chicago.

In fact, only AL home run leader Paul Konerko (currently out with a neck problem, but expected back Saturday), Andruw Jones (who’s been an early season waiver wire darling) and Alex Rios are meeting or exceeding expectations. Everyone else has vastly underperformed through the first few weeks of the schedule.

Things aren’t much rosier on the mound, despite the wonderful story that is Sergio Santos, John Danks’s emergence as a legitimate ace and Matt Thorton’s usual brilliance (please tell me why this guy hasn’t been given a closing job yet?). The Sox rank 11th in team ERA in the AL thanks to a rotation that’s been firestarter beyond Danks.

But perhaps there’s help on the way for Willams’s floundering squad?

Well, top prospect Jared Mitchell, an outfielder who hit very well in his pro debut at Class-A last year, got hurt in the spring and has yet to play a game this season, so I wouldn’t count on him making it to the bigs in 2010.

Catcher Tyler Flowers got off to a great start at Triple-A, but is slowing down lately (2-for-16 in his last four games). Still, I’d expect him to see more action in the bigs this year, but young catchers rarely have an offensive impact out of the gates. And besides, Pierzynski finally seems to be waking from his deep slumber (.304 with a couple of homers in the last week). Flowers may be an impact player in time, but it won’t happen in 2010. In fact, you probably won’t see him until the second half, unless the White really tank over the next month and deal away Pierzynski, who becomes a 10 and five man as of June 14, meaning he’ll be able to veto any deal. Besides, there are conflicting reports about how much more defensive development Flowers requires.

As impressive as righty Dan Hudson was last year, he had looked lost this season at Triple-A thanks to some serious control problems. On the plus side, he was lights out in his last start, so perhaps Hudson is getting his shit together. He’s definitely a name to watch for the second half of the season as I expect him to get called up once he’s proved he’s over his early-season woes in the minors.

Back on the parent club, as we discussed Konerko will be back in the lineup Saturday after sitting out the past couple of games with a sore neck. If you’re a Konerko owner like me, you definitely felt his absence. A few of you might have scoffed when we included Paulie on our pre-season list of contract year players to target, but if you listened to us, you’ve been reaping the rewards big-time. Let’s hope the down time did Konerko well, as he was a bit frosty in the couple of games leading up to the injury; perhaps it had been bothering him all week? But for a guy who traditionally struggles in April (11 homers combined from 2007 to 2009), he equalled that three-year total this past month alone while maintaining a near-.300 BA. September tends to be his best power month, so the way things are going, Konerko could very well challenge his career-best 41 dingers, set in 2004.

As big a pleasant surprise as Konerko has been so far, Beckham has been an even bigger disappointment. He was given Friday off to regroup after going hitless in five of his last six games including Thursday’s three-strikeout showing. Beckham is winding up on the wire in some leagues, but I’d suggest you exercise some patience here. Remember that he had played just 59 pro games before the Sox brought him to the Show last year, and he wasn’t overwhelmed at all. He’s traditionally a strong contact hitter, so I’m expecting the recent rash of strikeouts to diminish in due course. Consider Beckham an excellent buy-low candidate.

By RotoRob
This entry was posted on Saturday, May 8th, 2010 at 5:39 pm and is filed under BASEBALL, RotoRob, Team report. You can follow any responses to this entry through the RSS 2.0 feed. You can leave a response, or trackback from your own site.