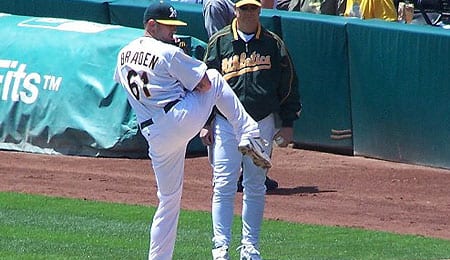 Notwithstanding his dealings with A-Rod, Dallas Braden has been brilliant this season.

Just when it appeared that Alex Rodriguez had conquered many of his ghosts by guiding the Yankees back to the playoffs, finally performing well in the postseason and adding a World Series title to his resume, he’s back to being a twat.

The episode on Thursday that sparked the ire of Dallas Braden, when A-Rod jogged over the pitcher’s mound on his way back to first base, has put Rodriguez back into the line of fire the past couple of days.

Is this really an “unwritten rule?” I’ve been following baseball my whole life and have never heard of it. But then again, we are all quick to jump on A-Rod for every slightly perceived indiscretion because he’s so damn hard to like. Braden may have overreacted here, but Rodriguez still gets the Pink Taco of the Week Award for his latest act.

Where it counts, A-Rod has been carrying his owners. He’s heating up big time with a six-game hit streak in which he’s smacked a pair of dingers, driven in five runs and scored another five. His extra-base pop looks like it’s rebounded a bit after two straight years of decline, and so far this season Rodriguez is drawing walks at his highest rate ever. By the way, he’s just two steals shy of 300 for his career, and by June, Rodriguez should have 600 career homers and 300 steals. The only players in major league history to have surpassed both totals are Barry Bonds and Willie Mays.

I guess there was a reason we ranked A-Rod at the top of all third basemen this spring.

Speaking of Braden, while he may not be as big as apparently he thinks he is, there’s no arguing with his early-season success. If you haven’t picked up him up yet, you better soon, because he’s looking like a difference maker off the wire. Braden has won his last three starts, and has tossed quality outings in all four of his trips to the mound. With the impeccable command he’s shown so far, plus an eye-popping WHIP of just 0.85, Braden is looking like a top 10 starter as opposed to the 75th-best hurler, which is where we ranked him. The truth is likely somewhere in between. As expected, his strikeouts are back down to more normalized levels after his shocking 10-K performance in his first start, but Braden is quickly becoming a must-own in all formats.

Despite the fact that Joe Blanton is already on the DL and now J.A. Happ has joined him, the Phillies won’t reach into a hat and pull out a Pedro Martinez quite yet. Yes, they are widely expected to sign Pedro at some point in the second half of the season, similar to what they did last year, but for now, Martinez remains at home in the Dominican Republic, exercising the Roger Clemens work schedule.

Of course, Pedro has competition this year, as John Smoltz may pull the same trick, meaning that Martinez may have to be a little less picky.

By RotoRob
This entry was posted on Saturday, April 24th, 2010 at 4:06 pm and is filed under BASEBALL, RotoRob. You can follow any responses to this entry through the RSS 2.0 feed. You can leave a response, or trackback from your own site.