Last Chance for the NHL in Atlanta? 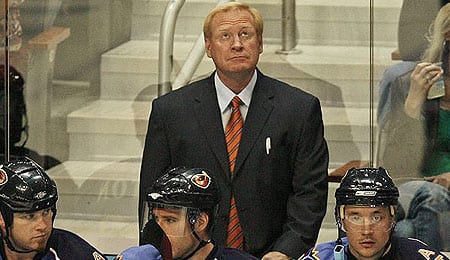 Yet another failure to make the playoffs cost John Anderson his coaching gig in Atlanta.

While most NHL cities are still either embroiled in the Stanley Cup race or are freshly licking their wounds, the Atlanta Thrashers, as one of the teams that failed to make the dance, have been focused on next season for a while.

A late-season slump ensured that as the team finished in 10th place in the Eastern Conference, five points out of the final playoff spot.

Despite showing some modest improvements, the Thrashers missed the playoffs for a third straight season, sparking a front office shakeup.

Coach John Anderson was canned and general manager Don Waddell was bumped up to team president with Rick Dudley taking over the GM duties.

Dudley has his share of challenges ahead of him.

Franchise player Ilya Kovalchuk is gone, dealt mid-season to the Devils. Veteran winger Slava Kozlov, such a big part of the team’s offense in recent years, found himself a healthy scratch for most of the second half as he endured the least productive season of his lengthy NHL career. Of course, with rumours that he’s headed to the KHL, the pending free agent will no longer be Atlanta’s problem. Kozlov may still look to continue his NHL career, but it definitely won’t be in Atlanta.

Dudley’s first order of business is to find a new coach. He probably won’t finish this quest until the playoffs are over, or at least until Chicago is eliminated, as the only name to emerge as a candidate so far is Blackhawk assistant John Torchetti.

While the Thrashers showed modest defensive improvement, moving from the second worst GAA to the sixth worst isn’t reason for celebration. This area needs to be addressed further. And offensively, the team was just middling after being a top 10 club the season before.

On special teams, Atlanta did show a nice improvement in penalty killing, rising from 29th to 16th, but the power play went in the opposite direction, dropping from 11th best to 25th.

The team has decisions to make in net where youngster Ondrej Pavelec is a restricted free agent and veteran Johan Hedberg is an UFA. Pavelec showed some progress last year, working his way into a job share in net, while Hedberg enjoyed a fine bounce back season, recording a career-best .915 save percentage. If the team opts to bring them both back – something Dudley says he’s considering – it will again be a nightmare for Fantasy owners. I’d rather see them hand the job to Pavelec, let Hedberg walk, and bring in a veteran backup who won’t expect to play much, but can help mentor the 22-year-old Czech netminder.

The Kovalchuk trade should start to pay bigger dividends next season. Defenceman Johnny Oduya experienced a nice offensive recovery after the trade, and he played much better in Atlanta after struggling in the first half for the Devils, missing plenty of time with injuries.

Swedish youngster Niclas Bergfors also responded well after the trade from New Jersey. Given extra ice time in Atlanta, the right winger stepped up his game offensively, so he could be poised for a breakout next season.

Finally, junior centre Patrice Cormier could also prove to be a big part of the Thrashers’ future. The Devils’ second rounder (54th overall) in 2008, Cormier is going to be given a chance to win a job on one of Atlanta’s top three lines next season. Despite missing three months because of a suspension for his well-documented elbowing of Mikael Tam in the head, Cormier has continued to show progress in the juniors, and gained valuable experience as a member of the last two Canadian World Junior Championship teams. He’s now breaking his professional cherry for the Chicago Wolves in the AHL playoffs, as the Wolves look to finally knock out Milwaukee in Game Seven Monday night.

Several Thrashers will play on next month at the World Championship. Centre Rich Peverley, who couldn’t quite duplicate the pace he set after arriving in Atlanta last year, yet still put up a career-best 55 points, will play for Team Canada. Joining him will be youngster Evander Kane, who enjoyed an impressive rookie season at the tender age of 18.

UFA Colby Armstrong, who is coming off a disappointing season offensively (although he was second on the team with a +6 mark), could be re-signed by the Thrashers. At the very least, the team plans to talk to him about coming back.

With exactly Atlanta managing just one playoff showing in its 11 years and experiencing serious attendance woes, Dudley better pull the right strings to turn this organization around pronto, or else the Thrashers could find themselves as the second NHL team to abandon Hotlanta.

The good news is the pieces are in place, with several young players poised to take a step forward next year and the team holding a top 10 pick (eighth overall) in June’s entry draft. But unless this team makes the playoffs in 2010-11, its future in this current location may be very cloudy indeed.

By RotoRob
This entry was posted on Monday, April 26th, 2010 at 2:42 pm and is filed under HOCKEY, RotoRob, Team report. You can follow any responses to this entry through the RSS 2.0 feed. You can skip to the end and leave a response. Pinging is currently not allowed.