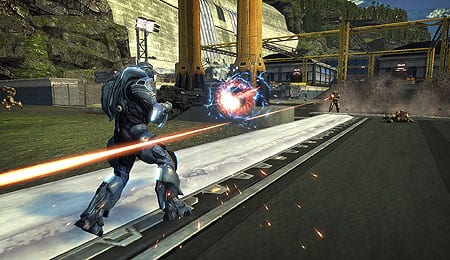 Things can get chaotic with 32 players on a single map.

Originally released in September 2009 as a full retail game on the Xbox 360, Section 8 recently made its way onto the Playstation Network as a downloadable title. It’s a first-person shooter that’s light on story and heavy on action, featuring intense online multiplayer with up to 32 gamers squaring off on a single map. It faces an uphill climb in an oversaturated market, especially given its somewhat steep learning curve, but Section 8 offers a lot of depth and fun for those willing to invest the time.

I’ll be the first to admit that I’m not nearly as comfortable playing shooters on the PS3 as I am on the Xbox 360 (I miss the triggers), but that fact alone cannot explain away the game’s uneven, and at times needlessly complex, controls.

First of all, every single button available on the controller is in use, and it absolutely will take some time to become familiar with all the different functions. The one I struggled with the most and found frustrating was using the combination of the circle and L2 to utilize my equipment. Each loadout has two equipment slots, and I was using grenades and a knife. I can’t tell you how many times I tossed a grenade when I wanted to knife someone. It just seems like an odd choice to not have a melee attack readily available at all times.

I also found the vehicle controls to be pretty iffy. Driving the tank can be an exercise in frustration and far too often I’d find myself stuck simply because I couldn’t figure out which way I needed to manipulate the tank to get it moving again. Aiming works just fine here, but you should be ready for some maddening deaths courtesy of enemies pounding your nearly stationary tank.

While some of the elements in Section 8 are impressive, you won’t be seeing anything in here that really stands out. The guns and armour all look fine without being innovative. Environments are big, but they tend to follow a pretty standard layout of a few futuristic looking buildings scattered around a lot of wide open, rocky terrain. One nice bonus, however, is that the premium Seek and Destroy Map Pack (US$7 on Xbox Live) is included for free and does add a little more variety to the scenery. The game also includes a handful of cut scenes during the campaign, all of which look good.

The sound effects don’t particularly stand out, nor does the limited musical score. There’s nothing bad about them. They’re just sort of there. Also, considering the less than daunting scope of the story, it’s not surprising that what little voice acting there is to be found in Section 8 is passable at best.

Section 8 is not technically a multiplayer-only game (a la Battlefield 1943), but it’s close. The limited single-player campaign, entitled “Corde’s Story,” is a thinly veiled tutorial for the game’s multiplayer mode that has you traversing the same maps you’ll find online and completing identical objectives. It’s actually a valuable tool as it familiarizes you with the game’s rather deep setup, and I highly recommend anyone buying the game play through it. However, don’t kid yourself into thinking you’ll be getting a completely separate single-player component.

Given that the campaign mode feels pretty much like an add-on, it’s up to the game’s multiplayer to handle all the heavy lifting. Thankfully, for the most part, it’s equal to the task. Processing all of the game’s different elements while trying to master the controls can be a little overwhelming at times, but once it clicks it becomes fun in a hurry.

Before joining the fray you’ll be given the option of choosing six pre-set loadouts along with the ability to customize your own. It may seem bare bones in comparison to something like Modern Warfare 2, but there are actually a lot of options at your disposal. You get to choose your weapons and equipment as well as passive modules, which is where you really tailor your playing style. You can carry heavy weapons and max out your shields to stand toe-to-toe with anyone, or roll with a sniper rifle and a stealth matrix to bring death from the shadows.

The loadout screen looks a bit outdated and can be a little confusing at first, especially with no meters to give you a read on how accurate a weapon is or how much damage it does. The game’s gun balancing isn’t a strong point, unfortunately, and in fact you’ll mostly see players using the basic assault rifle because “heavy weapons” like the shotgun and rocket launcher aren’t effective enough to offset smaller clip sizes and longer reload times.

Once your gear, which includes a limited burst jetpack, is all set, it doesn’t take long for Section 8 to differentiate itself from the rest of the online crowd as traditional spawning is tossed aside in favour of being sent rocketing towards the ground to begin each life. This allows for a lot of freedom as you can choose where you’d like to land. That gives you the ability to join your squad or go it alone behind enemy lines. You can also head directly for a quick capture of an enemy held position, but if they have A.A. guns defending the area your life might end before you even reach the ground.

Unlike many other shooters, Section 8 doesn’t allow for different game types. Instead, every game is built around capturing and holding various points around the 11 included maps. The more you hold, the more “victory points” you acquire with the first team to reach 1,000 points earning the win. As the games progress, sub-quests (called dynamic combat missions, or DCMs) will begin to appear, which allow for more points to be earned. For example, one side might be tasked with escorting a computer controlled VIP to safety while the other is told to kill them.

In addition to victory points for things like hacking control points or killing an enemy combatant, you’ll also earn dollars. Earn enough money during a game and you can turn that into supply drops such as turrets, mech armour and even a heavy tank. It’s an interesting concept, but the aforementioned control issues with the tank make it a rare buy even though it’s theoretically the most destructive item available. Instead, look for a lot of anti-personnel or anti-aircraft turrets to be purchased and deployed.

Section 8 throws a lot at you in short order and more or less asks you to figure it out on the fly, which is sure to dissuade some gamers. Those that stick around will find an enjoyable and deceptively deep first-person shooter that possesses just enough annoying flaws to hold it back from really breaking through.

By HC Green
This entry was posted on Thursday, April 8th, 2010 at 7:40 pm and is filed under Herija Green, Video Game Reviews. You can follow any responses to this entry through the RSS 2.0 feed. You can leave a response, or trackback from your own site.