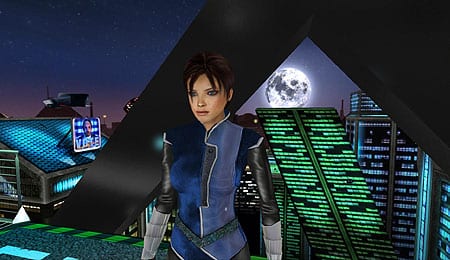 It’s been 10 long years since Joanna Dark first graced the Nintendo 64 and redefined what was possible with a console shooter in Rare’s masterpiece, Perfect Dark. The spiritual successor to the ultra popular Goldeneye, Perfect Dark set the bar by pushing the N64’s limits graphically while offering a ton of content.

Given the game’s passionate fan base, 4J Studios and Microsoft had to tread carefully when restoring the beloved classic for the ongoing XBLA Block Party. Mission accomplished. Perfect Dark on the Xbox Live looks better and runs smoother than the original, yet still retains everything that made the N64 version so special.

Considering that Perfect Dark was designed to work on the old N64 controller, which had only one analog stick and a much different layout, things actually work fairly smoothly. It can feel outdated at times, though, particularly on the classic setting.

Aiming while holding down the left trigger is really awkward; so is having to switch between firing your gun and using it to pistol whip somebody by pressing the right bumper and then the trigger. Although classic comes the closest to recreating the original experience, both the Spartan and Duty Calls settings seem to function better.

You have to hand it 4J Studios as it did a great job of polishing up the graphics without sacrificing the game’s classic visuals. It still looks like a 10-year-old game, but if you compare it side by side with the previous version there’s a very noticeable difference. Joanna’s assortment of weapons and gadgets look particularly good. The frame rate has also been fixed, and the game now runs at the 60 FPS it was intended to all along — something that was impossible back in 2000 with the game taxing the N64’s power.

The sound effects and background music both hold up very nicely. However, the voice acting is another story with whoever voiced Joanna still sounding like anything but a bad ass. It’s funny to watch these dialogue scenes from a time before mouths moved as characters bob their heads or shake blocky fists to indicate who is speaking.

Anyone that didn’t grow up with games that looked like this will almost certainly find the graphics antiquated, but longtime Perfect Dark fans should absolutely love them.

For those that didn’t play this game a decade ago, Perfect Dark casts you in the role of Joanna Dark, a special agent under the employ of the Carrington Institute. As such, you are dispatched to investigate suspicious activities within DataDyne, an evil defense contractor and rival conglomerate. The story, set in 2022, is a reasonably interesting one and sets the stage to send you to several unique locales, including Area 51 and a futuristic Chicago that clearly was heavily influenced by the film Blade Runner.

The game unfolds over 17 missions, each of which can be played on three difficulty settings. As you climb the difficulty scale you’ll find savvier A.I. (by 2000 standards) and more objectives that need to be completed. Along the way you’ll earn access to a ton of weapons and gadgets — so much so that even today it holds up pretty well against many contemporary titles. Each weapon comes packed with a secondary fire mode as well, which adds even more variety to the ways you can mow down your adversaries.

Where Perfect Dark can struggle is with objectives that aren’t always 100 per cent clear. Old school fans may feel it’s better without the hand holding we find in a lot of current games, but if you’re not sure what to do you can end up wandering around and getting frustrated. As someone that hadn’t played the game in years, I had some issues knowing which terminal to detonate or which part of the wall could be destroyed. I imagine those issues could be magnified for true newcomers to the game.

In addition to playing through the campaign alone, gamers can also team up for both online and offline co-op. The online experience even cleverly mirrors the offline by still having the split screen. Awesome. If you’re not in the mood to join forces you can also play counter-ops, where one player controls Joanna and the other takes over her foes. Both modes are nice compliments to the campaign and still lots of fun to play.

The vaunted multiplayer component (known as the Combat Simulator) is also accessible in four-player local or online, where it supports up to eight players. If you don’t have enough people to fill out the spots you can always add bots to the equation. The bots can be customized to do things like constantly attack the leader or just stand around and be bullet receptacles. Add to that plenty of maps and weapons (including some Goldeneye classics), and you’ve got a really enjoyable experience that can be adjusted to fit virtually any play style.

There’s an amazing amount of content packed into Perfect Dark, even beyond what’s already been noted here, and at 800 MS Points ($10) it may be the most bang for your buck on the service. For the uninitiated it will clearly be lacking the nostalgia element, but it still holds up surprisingly well. For fans of the original, it’s an absolute no brainer as this should now be considered the definitive version of the game.

By HC Green
Tags: Video Game Review
This entry was posted on Thursday, March 25th, 2010 at 9:21 am and is filed under Herija Green, Video Game Reviews. You can follow any responses to this entry through the RSS 2.0 feed. Both comments and pings are currently closed.