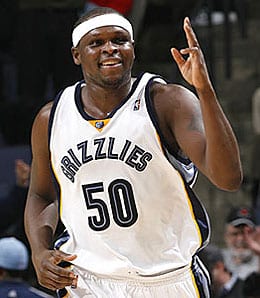 As great as Zach Randolph has been this year, he’s now hurting during playoff time.

Welcome to the Wire Troll for Week 24. Fantasy Hoops playoff time is here, and those lucky (by which of course we mean madly skilled) owners still in the hunt are scrambling madly to find that missing piece to hone their team to its finest edge. Often, that missing piece is a heretofore-unknown player, whose ability to contribute in a certain stat category makes him highly relevant to a Fantasy owner who is trying to prep his team for that final push.

There are a few of those specialists profiled this week in the Wire Troll; some of them make only modest contributions in several categories, but their talent for a single skill or two makes them a valuable Fantasy commodity as the season wanes.

In injury news, uber-guard Chris Paul is back on the floor, but he is clearly not himself just yet. Big ups to CP3 for gutting it out even though his team is a playoff afterthought at this point. Andrew Bynum will be out until early April, while Marc Gasol will try to return to action Sunday. Ditto for Andrew Bogut, who missed Friday’s tilt with back problems. Zach Randolph is dealing with a sprained ankle, and his status for the upcoming week is unknown. There are plenty of the “day to day” style injuries out there as well, so be sure to get the latest update before setting your weekly lineups.

Stay up to date on all the waiver wire-worthy news by following the Wire Troll on Twitter.

Serge Ibaka, Oklahoma City Thunder: If you’re in need of blocks in deeper leagues, look no further than Ibaka, who has averaged 1.7 swats – along with 7.3 points and 6.4 rebounds per game – in March. He won’t do much else for your team, but Ibaka should be a fine source of blocks the rest of the way. Are you listening, head-to-head leaguers?

Drew Gooden, Los Angeles Clippers: We featured Gooden just a few weeks ago, but the Clips’ big man is still, well, clipping along at a nice pace. Since the All-Star break, Gooden has averaged 14.8 points and 9.9 rebounds per game – while shooting nearly 49 per cent from the field and over 93 per cent from the stripe. He’s still available in about 40 per cent of Yahoo! leagues, so add Gooden if you need points and boards; just remember that he’s not much of a shot blocker.

Anthony Tolliver, Golden State Warriors: Tolliver has been outstanding in March, averaging 13 points, 7.1 boards, 2.8 assists, 1.7 treys, one steal and 1.1 blocks through 13 games. There doesn’t appear to be an end to this run in sight, as the hapless Warriors figure to run out the string on another disastrous season. Tolliver will battle inconsistency, but he is also capable of doing special things on any given night. His Yahoo! ownership is only about 45 per cent, but it’s climbing fast.

James Singleton, Washington Wizards: Singleton has been a beast on the boards for the Wizards of late, averaging 11.6 rebounds over his last five games. He isn’t much of a scorer, but his 10 points per game over the same period won’t be too damaging to your Fantasy cause. He was in Washington’s starting lineup Friday night, and if he can hold down that gig he could be a solid Fantasy force down the stretch. Add him in deeper leagues, watch him in standard formats.

Reggie Williams, Golden State Warriors: Williams was playing in the D-League just one month ago, but now he’s looking like he may be the guy who saves a lot of Fantasy owners’ collective bacon this year. Since being called up back on March 2, Williams has averaged 14.8 points, 3.7 rebounds, 2.2 assists and 1.6 treys – while shooting over 56 per cent from the floor and 85 per cent from the line. The Warriors have signed him through the end of the season, so grab him if he’s out there; Golden State has nothing to play for and is bound to take a look at what it might have in the 23-year-old Williams.

Brandon Rush, Indiana Pacers: When Rush is on a roll, all is right with his Fantasy owners, and now is one of those times. He has averaged over 35 minutes per game in March, while posting 12.9 points, 4.5 rebounds and 2.1 treys per outing. Rush has been even better over his past six games, averaging 14.7 points and 2.5 three-balls. Jump on board this train while it’s rolling, but be prepared to change cars when he inevitably cools off.

Earl Watson, Indiana Pacers: Watson is definitely a “pass first” point guard, but that’s fine with all those Fantasy owners out there Jonesing for a double helping of dimes with a side of steals. Through 14 games this month, Watson was averaging 6.4 assists along with 1.9 steals per game. Just for good measure, he had averaged just under one three-pointer per game – but as we stated earlier, his eight points per game won’t frighten anyone. Fantasy playoff time is about specialists, though, and Watson is a sneaky source of steals and assists that just might make the difference for your team this season.

By Buck Davidson
This entry was posted on Sunday, March 28th, 2010 at 11:15 am and is filed under BASKETBALL, Buck Davidson, The Wire Troll. You can follow any responses to this entry through the RSS 2.0 feed. Both comments and pings are currently closed.