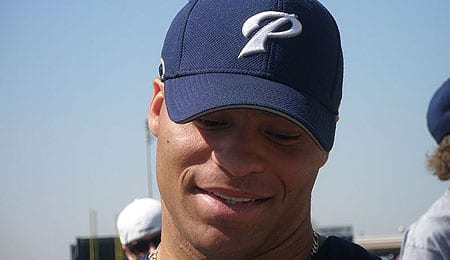 With the Padre outfield as inexperienced as it is, there should be plenty of opportunities for Scott Hairston.

We’ve got more of the 2010 RotoRob MLB Draft Kit for you, as we continue the Top 10 Lists Fantasy Owners Always Wanted But Were Afraid to Ask For. While Dustin Pedroia owners breathe a sigh of relief, let’s take a look at the top 10 fourth outfielders in the game. Just because they don’t have a full-time gig doesn’t mean this group can’t provide value for their Fantasy owners.

1. Scott Hairston, San Diego Padres (.265, 17 HR, 64 RBI, 50 R, 11 SB in 430 AB): The Pads dealt Hairston to the A’s last year, but reacquired him during the offseason to provide depth behind a woefully inexperienced group of starters. Kyle Blanks and Will Venable are talented, but neither guy has played a full year in the majors, and Tony Gwynn Jr. has more than had his fair share of drawbacks in centrefield. Gwynn and Venable are also left-handed, which creates natural opportunities for Hairston to see time against southpaws. My lone concern regarding Hairston’s playing time centres on his health woes, but a history of success at PETCO (.285-19-49 in 344 AB) along with his combination of power and speed earns him a spot atop our list.

2. Seth Smith, Colorado Rockies (.293, 15 HR, 55 RBI, 61 R in 335 AB): Smith was a beast as a pinch hitter last season, going 17-for-36 (.472) with 12 RBI. He played effectively splitting time with Carlos Gonzalez as well, and although the team will almost certainly want to get Gonzalez in the lineup more often after his breakthrough performance in the postseason, Smith should still log enough at-bats to be a force off the bench. He’s got good power and the plate discipline to be successful in any situation — and playing 81 games at Coors Field doesn’t hurt, either.

3. Ryan Raburn, Detroit Tigers (.291, 16 HR, 45 RBI, 44 R in 261 AB): For a while there it looked like Raburn would be moving into the starting lineup, but the signing of Johnny Damon pushed him back into the reserve role he excelled in last year. Despite that, Raburn’s prospects for 2010 look good with age at the corner spots and inexperience in centre as rookie Austin Jackson has been penciled in. Raburn posted excellent numbers in limited duty last season, and there’s no reason to think he won’t do it again. If he could log 300-plus at-bats you could be looking at something in the neighborhood of a .280-20-60 line.

4. Xavier Nady, Chicago Cubs (.286 in 28 AB): You wanna talk about a quality under the radar signing, let’s talk about Nady. The veteran missed most of last season after undergoing Tommy John surgery, but in 2008 he fashioned a .305-25-97 line splitting time between Pittsburgh and the Bronx. He’s currently penciled in behind disappointing import Kosuke Fukudome (.259-11-54), but if Fukudome and/or Alfonso Soriano (.241-20-55) play like they did in 2009 there should be no shortage of chances for Nady to get into the lineup. The one caveat with our endorsement is that Lou Piniella has said Nady won’t be ready to effectively play the field until July, which casts some doubt over his worth early in the season.

5. David Murphy, Texas Rangers (.269, 17 HR, 57 RBI, 61 R in 432 AB): The addition of Vladimir Guerrero pushes Murphy into a true reserve role this year after he operated as a part-time starter the past two seasons. That alone will move him into undrafted territory in many leagues, which could be a mistake given the players ahead of him on the depth chart. Guerrero, 35, has aged in dog years. Josh Hamilton appeared in only 89 games last season. Nelson Cruz couldn’t stick in the majors until he was 29, and Julio Borbon has fewer than 50 games under his belt. What are the odds that foursome makes it through the season incident free?

6. Ben Francisco, Philadelphia Phillies (.257, 15 HR, 46 RBI, 58 R, 14 SB in 405 AB): Based on talent alone Francisco should be higher on this list. The UCLA product has above average power and speed and could be a 20-20 guy or better with enough playing time. But therein lies the problem as Francisco is stuck backing up an outfield that accounted for 80 home runs, 254 RBI and 49 stolen bases a season ago. Only Raul Ibanez played in fewer than 155 games, and Francisco logged just 97 at-bats in a little over two months with the club. That makes him a bit of a flier even among extra outfielders.

7. Jonny Gomes, Cincinnati Reds (.267, 20 HR, 51 RBI in 281 AB): One thing you have to say about Gomes, the man doesn’t get cheated at the plate. That free swinging approach leads to a lot of home runs and plenty of strikeouts. He figures to see quite a few starts against left-handed pitching with Chris Dickerson handling most of the games against righties. That should help Gomes’ average, but his only real value to Fantasy owners lies in his power. Those looking for help in that area late in drafts should consider him an option.

8. Jeremy Hermida, Boston Red Sox (.259, 13 HR, 47 RBI, 48 R in 429 AB): Viewed somewhat unfairly as a bust, Hermida is getting a fresh start this year as a backup in Beantown. He’s averaged a .267-16-57 line the past three seasons, and while he won’t see as much playing time with the Red Sox, he should still find his way on the field a fair amount given the presence of J.D. Drew, who has missed 100 games during his three-year tenure in Boston. Once considered one of the game’s top prospects, Hermida is still young enough to have legitimate upside.

9. Gerardo Parra, Arizona Diamondbacks (.290, 60 RBI, 59 R in 455 AB): With Conor Jackson missing much of last season because of a viral infection, Parra stepped in and played very well as a rookie. He struggled against lefties (.220-0-8 in 100 AB) and lacks power, but he’s hit for a solid average at every level and owns 84 stolen bases in 355 career minor league games. Parra should be the team’s primary backup at all three outfield spots and might be called upon more than you think given Jackson’s health and the continued downward spiral of Chris Young.

10. Felix Pie, Baltimore Orioles (.266, 9 HR, 38 R in 252 AB)/Matt LaPorta, Cleveland Indians (.254, 7 HR, 29 R in 181 AB): We’ve reached obligatory upside guy time on our list, but we’re copping out by tossing two names out there: Pie and LaPorta. Both play for poor teams that just happen to be deep in the outfield, which leaves them in tough spots for the moment. LaPorta seems to have a better chance because he also plays first base, though the Tribe signed veteran Russell Branyan to handle those duties. LaPorta could also push Michael Brantley, another player acquired in the C.C. Sabathia haul, in left field, but it’s questionable whether Cleveland would leave LaPorta in the majors if he’s not starting.

Pie is almost certain to break camp on the 25-man roster and is slated to back up Adam Jones and Nolan Reimold, who is coming back from surgery on his Achilles. Only 25, Pie has already been written off in some circles after washing out in Chicago, but he flashed the skills to be a productive major leaguer last year. Consider both men late-round fodder for AL-only leagues.

Anyone looking for a reclamation project in NL-only formats should keep an eye on Jim Edmonds, who looks like Plan B in Milwaukee in case Carlos Gomez isn’t the answer in centre.

By HC Green
This entry was posted on Saturday, March 27th, 2010 at 4:37 pm and is filed under 2010 RotoRob MLB Draft Kit, BASEBALL, Herija Green, Top 10 lists. You can follow any responses to this entry through the RSS 2.0 feed. You can skip to the end and leave a response. Pinging is currently not allowed.