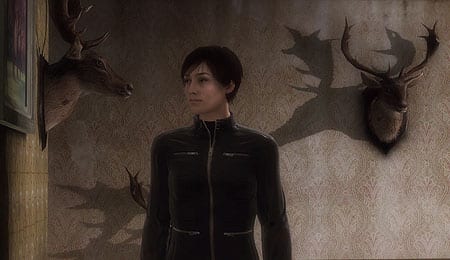 Previously available only to those that pre-ordered Heavy Rain through GameStop, The Taxidermist will be making its way to the Playstation Network on April 1 at a cost of US$4.99. This is the first in a series of prequels that help flesh out the stories of the main characters leading up to the events seen in the game. Dubbed the Heavy Rain Chronicles, the initial installment follows plucky insomniac (and journalist) Madison Paige as she follows up on a lead in her search for the Origami Killer.

As with the full retail release, The Taxidermist is excellent at creating tension. It’s creepy enough when you’re alone investigating the house, but once the owner returns home it amplifies by a factor of 20. The split screen that shows his position and yours is used to perfection, and you’ll almost certainly find yourself willing Madison to move faster when you know danger is lurking around the corner.

Of course, moving with precision isn’t exactly Heavy Rain’s strongest point. That’s an issue that becomes magnified when you need to get from Point A to Point B in a relative hurry and can lead to some unnecessary frustration. Also worth noting is that Madison is not voiced by the same actress who handled the duties during the retail release. It’s a result of this having been created before the main game, but that doesn’t make it any less awkward to hear.

The other primary drawback with The Taxidermist is the length. I was fairly thorough in my exploration of the house and still finished in just a shade over 20 minutes. The game invites you to reload the checkpoints to view the other endings (there are five in all), but we’re still talking about no more than an hour of new content. Trophy hunters will also be disappointed to find no new rewards have been added.

There are some definite shortcomings on display here as it adds very little depth to Madison’s character and is over too quickly. However, even within that brief timeframe it still manages to create a memorable experience that can be legitimately unnerving. If you enjoyed Heavy Rain you’ll absolutely find The Taxidermist worth playing.

By Herija Green
This entry was posted on Monday, March 29th, 2010 at 1:37 pm and is filed under Herija Green, Video Game Reviews. You can follow any responses to this entry through the RSS 2.0 feed. You can leave a response, or trackback from your own site.