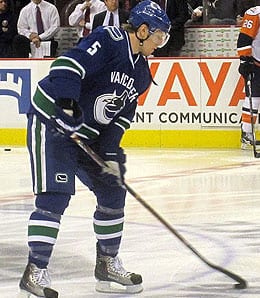 The Canucks’ acquisition of Christian Ehrhoff has worked out extremely well.

In this week’s Fantasy Hockey Roundtable, the panel was asked to evaluate trades made so far this year: “Of all the trades made during this calendar year, which seems to be the sharpest?”

Here’s what they had to say:

Out here in Vancouver, the one trade that is being called a steal is the late summer trade that saw Christian Ehrhoff join the Canucks, along with Brad Lukowich, for fizzling prospect Patrick White and unknown Daniel Rahimi. Ehrhoff has now reached the 40-point mark in consecutive seasons and has turned a -12 last season into a +26 this season. Ehrhoff has been exactly what the Canucks needed in order to provide offense to a stagnant defense corps.

The sharpest trade in the last year to me was the Philadelphia Flyers acquisition of Chris Pronger from Anaheim the day of the 2009 NHL Draft. Pronger is currently fourth in the entire league in scoring among defensemen and has kept himself in the lineup instead of getting suspended while injuries to many of his teammates have stalled the team’s progress. And now with the team on its third goaltender in Brian Boucher (after Ray Emery was lost for the season to hip surgery, and Michael Leighton lost for 8-to-10 weeks with a high ankle sprain), having someone who can keep the front of the net clean, and chip in that much offense makes Pronger the sharpest acquisition any team has made in the last calendar year.

And as for me?

Going purely by the calendar year, I think Toronto grabbing Phaneuf from Calgary is a huge move for the Leafs. He is a defensive presence and a smart player, but he’s also a strong personality that’s going to help shape a bland team.

Leaf GM Brian Burke loves tough, gritty teams that play hard. Phaneuf has the opportunity now to become that kind of player, leading by example. And so far, he seems to be relishing the opportunity.

So sure, you’re not going to see the Leafs in the playoffs this year, but next year is going to be a completely different season for them and Phaneuf will be a big part of the turnaround.

By Steven Ovadia
Tags: Fantasy Hockey
This entry was posted on Saturday, March 27th, 2010 at 10:08 am and is filed under HOCKEY, Roundtable, Steven Ovadia. You can follow any responses to this entry through the RSS 2.0 feed. Both comments and pings are currently closed.