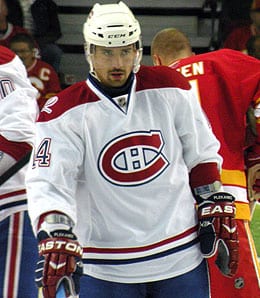 Once upon a time, a Washington Capital victory was news. Man, have times ever changed! Now, it makes headlines when the team loses, which – despite a fantastic comeback effort – is what happened Wednesday night, ending the team’s 14-game winning streak – a franchise record.

Trailing 5-2 in Montreal at the end of two periods, it sure looked like the Caps’ streak was going to end without a whimper. But three third-period goals, including the tying marker with just 19 seconds left, forced overtime. And then the Caps came within eight seconds of heading to a shootout before Tomas Plekanec finally ended the drama, giving the Habs a 6-5 win.

Amazingly, it’s been almost a month since Washington last lost a game, and this incredible streak left them just three wins shy of the NHL record of 17 straight wins, set by the 1992-93 Penguins.

For the Caps, Brooks Laich is making last year’s breakout look like just a prelude to something very special. He scored the final two goals for the Caps, winding up with a hat trick and reaching the 20-goal mark in just 60 games. He set his career high with 23 last year, and will easily blow past that given his recent pace (seven goals in the last 10 games). Laich has really snuck up on us as a real Fantasy asset this season, but we doubt he’s still available unless you’re in a very shallow league.

One player who has a better chance of still being on your wire – but likely not for long – is Montreal’s Plekanic. His OT winner was part of a two-goal outburst, giving him six goals and five assists in the past 10 games. He’s bounced back nicely after last season’s disaster, and the durable centre should top 20 goals for the fourth straight season. We identified his career year as worthy of Fantasy attention a couple of months ago, and he’s gaining traction on the wire recently. Wednesday’s outburst should intensify that trend.

Most of the Fantasy focus for the Capitals has been on their ridiculously potent offense, which is miles ahead of any other NHL team. At the other end of the rink, they’ve been middling, but it hasn’t mattered because of all those freaking goals they’re scoring. Come playoff time, that could be a different story, but right now, it’s a non-factor with Bruce Boudreau’s club putting up W after W.

As a result, goalie Jose Theodore has been somewhat ignored until fairly recently, when he started to get hot. Starting with his shutout win on January 13, he looked very strong for a couple of weeks, going eight straight games without giving up more than three goals or saving less than 90 per cent of his shots. Unfortunately, in the past week, things have gone downhill quickly. He gave up five goals on 38 shots against the Rangers, four on 35 shots vs. the Pens, and then – in a relief role Wednesday – his former team beat him four times on just 25 shots.

With young goalies Michal Neuvirth and Semyon Varlamov earning more and more PT this season, Theodore hasn’t seen nearly as many starts as he did in his first season in the nation’s capital. However, Varlamov has been out for a couple of months with a knee injury, opening the door for Theodore to regain value. And, as we mentioned, until recently, he was doing just that. But as we expected, Varlamov is back now, and could make his return this weekend, meaning that Theodore’s value is about to take another hit. For now, wait and see how this plays out after the Olympic Break, unless you have an obviously better option sitting on the wire.

One Capital whose Fantasy value is never in question is defenseman Mike Green, who continues to roll. He scored his 16th goal of the season Wednesday, adding an assist and turning in a +2 performance in the losing effort. Green now has six points, including two goals, in his last five games, putting him back over a point-per game pace. He’s avoided major injury this season, and while he won’t come close to duplicating last season’s 31-goal explosion, Green is headed for a career best in points. If he stays hot down the stretch, 80 points isn’t out of the question.

For the Habs, Glen Metropolit tied his career high with his 12th of the year, giving him a mini hot streak (for him) of two goals in the past four games. However, unless you’re in a very, very deep league, he’s miles from Fantasy relevance until he regularly starts getting at least 15 minutes per game, which has occurred just three times in the past 10 games.

Montreal’s Maxim Lapierre, who has been a massive disappointment after showing some potential last season with 15 goals, is exhibiting signs of life. He scored his third goal in the past 10 games Wednesday, which hardly qualifies as a hot streak, but considering that he only scored twice in the first 51 games, it’s definitely something. He’s light years from offering Fantasy value, but could be worth watching at the very least, assuming he’s coming around somewhat.

Also, keep an eye on Tom Pyatt. He had 11 goals and 29 points in 36 games for Hamilton in the AHL before getting the call back to Montreal on Tuesday. While he failed to record a single point in limited PT in 19 games with the Habs earlier this season, Pyatt fired a goal and an assist in his first game back with the big club, going +1 and seeing 16:11 of ice time. He’s playing with Scott Gomez and Brian Gionta, so Pyatt could ride their coattails into being a sneaky Fantasy play.

By RotoRob
This entry was posted on Thursday, February 11th, 2010 at 2:04 pm and is filed under HOCKEY, Rink Notes, RotoRob. You can follow any responses to this entry through the RSS 2.0 feed. You can skip to the end and leave a response. Pinging is currently not allowed.