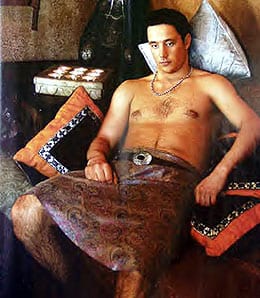 How will Ilya Kovalchuk and his kilts go over in the Swamplands?

Ilya Kovalchuk is now a New Jersey Devil, though it’s yet to be seen how he’ll work under Jacques Lemaire’s defensive-automoton system. Kovalchuk doesn’t have the best work ethic, so it’ll be interesting to see how they clash. However, what does it mean for the Thrashers? Maxim Afinogenov, who is Facebook friends with Kovalchuk, will be affected negatively without having his buddy there. However, Kovalchuk’s ice time will have to go somewhere. Bryan Little, who’s seen a massive drop from his 31-goal year last season, and rookie Evander Kane will be looked upon to step up their game in Kovalchuk’s absence.

The Kovalchuk fiasco has also overshadowed the return of oft-injured (but talented) goaltender Kari Lehtonen. Lehtonen’s doing an AHL conditioning stint right now, but he’ll be back with the big club in a few days. If you want to be preemptive about things, pick him up now and stick him on your bench. Word has it that Lehtonen’s being actively shopped, most likely based on the results of his AHL trip. Goaltending is always in demand, and wherever Lehtonen goes, he’ll get the chance to be a starter.

It’s hard to believe that a trade involving a former Conn Smyth winner who won a Stanley Cup a few years back could be overshadowed, but everyone’s so hot and bothered about Dion Phaneuf in Toronto that most people forget about Jean-Sebastian Giguere. Here’s the key thing to remember: in Fantasy, starts are king. Even if the team loses, you should still get points for shots. Giguere and his $7 million contract are going to get the bulk of Toronto’s remaining starts, so pencil that in, despite the inevitable losses.

Speaking of starts, let’s move a little northeast from Toronto up to beautiful Montreal. Jaroslav Halak, he of the many trade rumours, has gotten most of the recent starts for the Habs, and why not? Halak’s proven himself to be more consistent than Carey Price, and Jacques Martin must ride the hot hand right now with the playoff races so tight.

Olli Jokinen, the former 90-point centre who plays like a 60-point forward, is now on Broadway, and he’s had his chance to line up with Marian Gaborik and Vaclav Prospal. He’s not a John Tortorella-type player, though, and I imagine that this marriage won’t last too long before Torts starts shuffling Jokinen around. However, he’s bound to have one or two big games in his first handful — most guys do after a big trade. Wait for this moment, then unload Jokinen while his value is peaking.

What will happen in Columbus without Ken Hitchcock? Everyone knows Hitch is a demanding fellow who can be tough on young guys. Derrick Brassard’s rough sophomore campaign may not have much to do with Hitchcock (Brassard praised him in the media for helping him become a more NHL-ready player), but he’s got a clean slate now. Keep in mind that the interim coach is Hitchcock’s assistant Claude Noel, and Noel hasn’t done enough to really establish an identity, though the safest thing for a team in transition is to gradually change systems. Because of that, Noel may get his young guys to respond better, but don’t look for Columbus to explode offensively a la Washington or Chicago. It is, however, worth watching Brassard and even Steve Mason (he of the atrocious goals-against average).

The Red Wings are almost at full health with Johan Franzen getting his skating legs back. Mike Green is sidelined with a three-game suspension, but it gives him time to let his left knee heal. Teammate Semyon Varlamov is on the mend and should be able to return after an extended absence. In Chicago, Dave Bolland is back, but will be given a few games to get back into form, though Joel Quennville will give Bolland a chance to mesh with Marian Hossa.

By Mike Chen
Tags: Ilya Kovalchuk
This entry was posted on Friday, February 5th, 2010 at 5:19 pm and is filed under HOCKEY, Ice Chips, Mike Chen. You can follow any responses to this entry through the RSS 2.0 feed. Both comments and pings are currently closed.