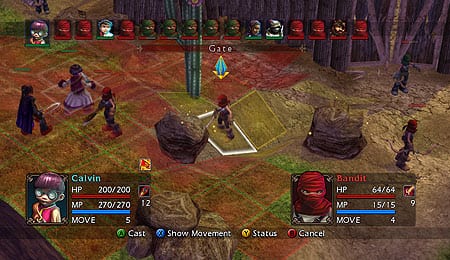 The guy with the purple bowl cut is about to open a can of whoop ass on that bandit… no, seriously…

While most of my game collection is made up of various action and sports titles, I’ve long held a soft spot in my heart for the strategy role-playing game (SRPG) genre. This affection can easily be traced back to Final Fantasy Tactics for the original PlayStation, which still rates as one of my favourite games. However, neither Xbox Live Arcade nor PlayStation Network offers many alternatives of that variety, which made Vandal Hearts: Flames of Judgment a noteworthy release for SRPG fans. Given the lineage of the Vandal Hearts series, the question became whether or not the new release holds up as a worthwhile installment.

With this being a turn-based strategy game, the controls are extremely simple. You select where you want your character to go with the left stick and press X to send him. The X button also brings up your action options, allowing you to do things like switch your weapon, use magic or attack. The shoulder buttons are used to rotate and zoom in/out on the map. Beyond that, all other face buttons are used for basic tasks like calling up your status or undoing previous commands.

To say that Vandal Hearts: Flames of Judgment favours an unusual melding of graphical styles would be an understatement. On the one hand you’re being presented with reasonably mature subject matter, featuring themes like war and betrayal. However, on the other hand, it’s all being presented with bizarre looking caricatures that would seem more natural appearing in a game aimed at children. Combine that some over the top bloodshed — we’re talking about Kill Bill-esque gushers of blood here — when blows are struck and it adds up to a very unusual mix.

I didn’t much care for the goofy looking characters, particularly Calvin, who could not be more of a stereotypical nerd with a purple bowl cut and round glasses. He looks absurd. The main character, Tobias, isn’t much better as he looks like a teenage prep-school reject. Not exactly the first person you’d pick to save the world. Thankfully, this goofiness is pretty well isolated to cut scenes and the static “head shots” on the status screen. The in-game graphics themselves look solid with interesting enemies, environments and spell effects.

The musical score is good, headlined by a cool song during the opening screens, and accompanies the action well throughout. Sound effects were more hit or miss. Most of the attack effects are good, but I definitely grew tired of some of the screams and whimpers of my foes during combat. The voice acting during cut scenes is serviceable, and there are also a few lines of dialogue spoken during combat.

For anyone unfamiliar with SRPGs, the basic concept is that your faction faces off against a group of enemies in battles broken up into turns and rounds. In Vandal Hearts: Flames of Judgment each unit on the board is given one turn per round, and when the round ends things start all over again. The map is broken up into a grid with movement limited to a certain area. Each turn ends when the character attacks, casts a spell or simply defends their position. Those are the basics of the genre, and for better or worse it’s exactly what you’ll be doing throughout this game with little in the way of innovation.

In addition to familiar game mechanics, Vandal Hearts: Flames of Judgment is also rooted in some pretty recognizable storytelling. The game kicks off with you and your school chums in training, but things quickly get dangerous when armed thugs attack your town. You’re dispatched to get help and from there you’re on your way in what is a largely linear adventure that contains the requisite twists and even the obligatory romantic subplot. It’s not a bad or uninteresting tale, but it’s not breaking new ground, and the use of the aforementioned strange cut scene animations really works to take some of the gravity out of what should be more emotional situations.

Beyond the missions necessitated by the story there are eight optional battle maps waiting to be unlocked, and gamers can also backtrack to fight on previously visited areas. This allows for plenty of extra leveling up if you find yourself having trouble progressing through the main quest. All told you can expect to invest in the neighborhood of 10 hours to complete the game, which while on the short side for an SRPG is pretty solid value for the money (1,200 MS Points, $15). For added replay value the game also features more than one ending based on the choices you made throughout.

As for the gameplay itself, Vandal Hearts: Flames of Judgment utilizes a system whereby the skills that you use are the ones that automatically improve. For instance, if you’re consistently casting a “Heal” spell you’ll find that it becomes more and more effective. Conversely if you rarely shoot enemies with a bow the damage will be lower when you do finally dust off ranged attacks. It’s a good system and allows for customization without forcing players to manually advance skills.

While in combat you’ll find that elements in the environment can be used to attack foes, such as pushing boulders. Attacks from behind will cause additional damage, but as long as you’ve got a proper weapon equipped your character will counter — that means someone with a bow will fire back if they’re shot from long range but will not retaliate if stabbed. The game also allows for “team attacks,” where a teammate piggybacks on your attack to deal additional damage. The system doesn’t lay out specific rules for how to trigger these, however, so it seems inconsistent. However, it’s clear that proximity to each other and the target plays a role.

A more traditional artistic style would’ve helped Vandal Hearts: Flames of Judgment considering the content of the game, but ultimately it’s easy to overlook given the strong gameplay. Fans of the genre should find plenty to like here, making this a solid addition to collections.

By Herija Green
This entry was posted on Friday, February 12th, 2010 at 2:07 pm and is filed under Herija Green, Video Game Reviews. You can follow any responses to this entry through the RSS 2.0 feed. You can leave a response, or trackback from your own site.