The Wire Troll: Callin’ on Collison 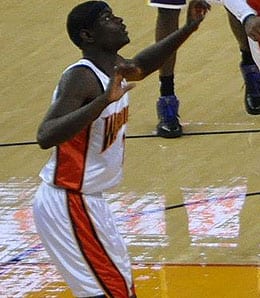 Anthony Morrow is returning from his injury, so pick him up if he’s available.

Welcome to The Wire Troll for Week 16.  Even though the NBA All-Star Game is looming, it’s injuries that dominate the news this week. No bigger blow was dealt to Fantasy owners than when uber-guard Chris Paul suffered a torn meniscus in his left knee back on January 27. CP3 underwent surgery last Thursday, and is expected to miss four-to-six weeks. Until then, Fantasy owners will have to scramble to try to account for the loss of one of the game’s greatest players.

In other injury news, Brandon Roy of Portland is still out with a bum hamstring, and rumours are that he may be sidelined until after the All-Star break. Bench him until he’s back in there. Carmelo Anthony has missed seven consecutive games with a sprained ankle, and may be out again on Saturday. Boston’s Paul Pierce injured his foot last Monday, but may be back in the lineup Sunday.

Utah forward Carlos Boozer hopes to return Saturday after missing three games with a strained calf. When the Booze Cruise sails again, Paul Millsap’s Fantasy value will be left behind in port. Bull centre Joakim Noah has had a fine season, but the team has shut the talented youngster down until after the All-Star Break due to plantar fasciitis. It’s a prudent move by the still-in-contention Bulls, but of course Noah’s Fantasy value takes a hit in the short term.

Gerald Wallace of Charlotte missed Wednesday’s game due to a sore hamstring, but is expected to return Saturday. As always, keep close tabs on any injury involving the talented-but-brittle Crash Wallace. Several other top players are listed as day-to-day, including Jose Calderon, Andrew Bogut and Dirk Nowitzki, so stay up to date with the latest news before making those line-up calls.

Take a close look at the schedule this week, weekly leaguers: The upcoming All-Star break has limited some teams to just a single game, while the Orlando Magic enjoys a three-game week.

Brad Miller, Chicago Bulls: Miller makes a rare repeat appearance in The Troll, as the Bulls’ decision to shut down starting centre Joakim Noah until after the All-Star break lends a significant boost to Miller’s Fantasy worth. That’s nice for him and all, but even with increased minutes Miller is probably only viable in leagues with more than 12 teams. He’s not the player he used to be, and Noah’s battle with plantar fasciitis is the only thing keeping Miller in Fantasy lineups. Keep an eye on his production, but Miller appears destined to remain a fall-back option rather than a go-to guy.

Peja Stojakovic, New Orleans Hornets: Peja has been on a nice little run lately, averaging 16 points and 2.5 treys over the past six games. You know the drill with Stojakovic: he’s worth owning when he’s going well, but his lack of peripheral stats makes him a liability when his shot’s not dropping. If you’re in need of three-pointers, though, Peja can pump them up like few others can.

Anthony Morrow, Golden State Warriors: Morrow has missed the last 10 games due to a sprained knee, but he’s hoping to play Saturday night. Before going down with his injury, Morrow was averaging 11.3 points and 1.8 treys per game – while shooting a tidy 47.9 per cent from the field and 90 per cent from the stripe. He plays for Don Nelson, but Morrow was seeing plenty of run before the injury. If you’re in need of treys, Morrow is definitely worth a look.

Donte Green, Sacramento Kings: Green threw in a career-high 31 points Friday night, and the second-year man has seen a lot of playing time lately with Jason Thompson sidelined due to a death in his family. Thompson is slated to return Sunday, but Green appears to have locked down a spot in the starting lineup. He’s not much of a force on the offensive end, but perhaps his 31-point outburst may earn him a few more looks. With the Kings headed for another dismal season, youngsters like Green may begin to play a larger role as the season winds down, and that alone makes him worth a speculative add in larger leagues.

Nate Robinson, New York Knicks: Little Nate has been in and out (mostly in) of coach Mike D’Antoni’s doghouse all year long, but the continued poor play of Chris Duhon finally inspired Coach D to name Robinson as his starting point guard last Thursday. Robinson responded with 13 points (on an abysmal 3-of-12 from the floor), four rebounds and seven assists the following night. He won’t be the most consistent producer out there, but Nate-Rob should be owned in just about every league as long as he holds the starting job in the NYC.

Darren Collison, New Orleans Hornets: Last week’s Wire Troll gave you an early heads-up on Collison with an “if/then” blurb about Chris Paul’s knee injury. What a difference a week makes, as CP3 is down for four-to-six weeks, and Collison is starting at the point for ‘Nawlins. Like any rookie, Collison has been rather inconsistent in his new role, and his turnover rate is problematic at this point – but he should be a solid source of points, steals and dimes as long as CP3 is on the shelf. If Collison is somehow still available in your league, time is running out, so hustle over to the wire and make your move.

By Buck Davidson
This entry was posted on Saturday, February 6th, 2010 at 3:29 pm and is filed under BASKETBALL, Buck Davidson, The Wire Troll. You can follow any responses to this entry through the RSS 2.0 feed. You can leave a response, or trackback from your own site.