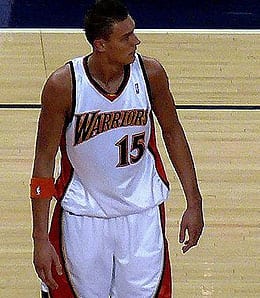 Andris Biedrins has been one of the bigger disappointments in the first half.

Welcome to The Wire Troll for Week 15. The NBA season has reached its halfway point, and we’ve seen a fair number of shocking things in the first half. Who would have thought that the Memphis Grizzlies, New York Knicks and Milwaukee Bucks would be right in the think of the playoff chase at this point – while the Sixers and Pistons are all but on life support? Who would have known that players like Brandon Jennings, “Cool Hand” Carl Landry, Stephen Curry and Tyreke Evans would be integral parts of so many Fantasy teams, while higher-round draft choices like Andris Biedrins, Anthony Randolph and Jose Calderon would go into the tank? We can only hope that the second half of the season provides as much entertainment and intrigue as the first three months. That might be tough now that Agent Zero is out of the mix, but we can only hope.

In injury news, Brandon Roy of Portland is still nursing his gimpy hamstring, and is hoping to return to action this week. Considering how long this thing has lingered, though, we wouldn’t risk playing Roy in weekly lineup formats. Spurs guard Tony Parker is expected to miss several games due to a sprained ankle, but given that he may be enjoying the personal therapeutic support of a certain Desperate Housewife, none of us would blame him if he extended his convalescence just a bit, now would we?

Gossamer guard Devin Harris of New Jersey is still out with his sore wrist, but is slated to return this week. We’ve learned by now not to take a chance on Harris until we actually see him back on the court (especially since the 4-41 Nets don’t exactly have any reason to hurry him), so The Troll would suggest you find another option…and there’s quite a few out there right now. Utah forward Carlos Boozer suffered a strained right calf Wednesday, and is expected to miss at least 10 days. Paul Millsap will fill in while Boozer is out, and he is a must-add in every Fantasy format.

Uber-guard Chris Paul injured his knee and had to leave the game Friday night, but the good news is that he returned and tried – unsuccessfully – to play through the pain. Keep an eye on this, as he’s listed as questionable for Saturday’s game. If CP3 misses time, Darren Collison again becomes a Fantasy must-have.

Channing Frye, Phoenix Suns: After losing his starting gig, Frye was abandoned by many Fantasy owners. Hold the phone, though: Frye has scored at least 20 points in two of his last three games, while tossing in 10 three-pointers over that stretch. Don’t expect consistency, but Frye looks like he should remain a good source of treys and a serviceable source of blocks for owners in deeper leagues. The loss of Leandro Barbosa for at least a month opens up more minutes for Frye, so he should remain a viable Fantasy option for the near future.

Brad Miller, Chicago Bulls: Starter Joakim Noah has been slowed lately by a bout with plantar fasciitis, and Miller has stepped up nicely to fill Noah’s shoes. The veteran centre has racked up double-digit points in four straight games, along with seven treys during that period. Miller’s value is directly tied to Noah’s health, so keep an eye on Joakim’s minutes going forward. Miller has shown he can play the game, so he’s a decent speculative add in larger leagues until Noah gets back to his normal playing time.

Paul Millsap, Utah Jazz: Hopefully you’ve already added Millsap, as reading the words “Carlos Boozer injured…” generally triggers a Pavlovian run to the waiver wire by experienced Fantasy owners. It’s not certain how long Boozer will be out, but Millsap was an absolute beast in his first start of the season Friday night with 32 points, 14 boards and seven rebounds – while shooting 11-of-17 from the field and 10-11 from the stripe. You know the drill by now: As long as Boozer is sidelined, Millsap is a must-have in every Fantasy format. Be prepared to cut bait when the Booze Cruise sails again, but for now sit back and enjoy a ride on the Millsap Express.

Andrei Kirilenko, Utah Jazz: Kirilenko has also benefited from Boozer’s absence, but AK-47 had it going pretty well even before CB went down. In January, Kirilenko has averaged 13.4 points, 4.6 rebounds, 2.4 assists, 1.5 steals and 1.4 blocks per outing, evoking memories of his days as a Fantasy stud. We’re not sure those days have returned for good, but what is certain is that the Russian Rifle is once again a formidable Fantasy weapon, and he should be even better while Boozer is out.

Anthony Tolliver, Golden State Warriors: Deep leaguers should be aware that Tolliver – a December call-up from the D-League – has become an important part of the Warriors’ battered lineup, averaging an impressive 14.7 points and nine boards in three games as a starter. He has never stuck for long in the NBA, so his run of success could be short-lived – but while Golden State is strapped for healthy big men, he should see plenty of run. Add Tolliver if your league has more than 12 teams, but be ready to cut him loose when he cools off – or the Warriors get healthy.

George Hill, San Antonio Spurs: Hill was carving out a nice little season before Parker went down, and had even earned a starting job at the two – but TP’s injury makes Hill a must-start in just about every Fantasy format. Hill started at point guard Thursday night, tossing in 18 points and handing out five assists. He didn’t attempt a three, but treys were not a big part of Hill’s game as a two-guard. On the subject of which, Roger Mason should be a nice source of treys while Parker is out – but he’s too much of a one-trick pony to merit global Fantasy attraction.

Brandon Rush, Indiana Pacers: Coach Jim O’Brien has done a fair amount of tinkering with Indy’s starting lineup lately, but Rush has just continued to produce through all the confusion and uncertainty. In the past five games, the third-year man has averaged 14.8 points, 5.4 rebounds, 2.8 treys and a surprising 1.2 blocks. We wouldn’t expect those block totals to stay at this level for long, and Rush could conceivably lose minutes if O’Brien decides to mix things up yet again, but for now Rush looks like a great addition if you’re hungry for treys.

Marcus Thornton, New Orleans Hornets: Thornton has been very steady for the Hornets this season, but his recent promotion to the starting lineup should draw the attention of Fantasy owners everywhere. In his first three games as the starting two-guard, he has averaged 19 points, three treys and one steal in 39.5 minutes per game. Yikes. Last week’s trade of Devin Brown pretty much opens the door for Thornton to pile up points and treys – though that’s pretty much all Fantasy owners should expect from the rookie at this point. If your team needs help in either of those two stat-cats, add Thornton immediately; if he rounds out his game a bit so much the better.

Rudy Fernandez, Portland Trail Blazers: With Roy out of the lineup, and Martell Webster beginning to cool off, all eyes turn to Fernandez to pick up the scoring slack. Rudy obliged his fans Friday night, scoring 25 points while knocking down five treys, grabbing five rebounds and dishing three assists in 25 minutes. He’ll run hot and cold, but when he’s on his game Fernandez can pour in points with the best of them. Grab him if you need treys, and enjoy his modest contributions in steals, boards and dimes as part of the deal.

Goran Dragic, Phoenix Suns: As discussed, Barbosa looks like he’ll miss at least a month in the wake of wrist surgery, and Dragic stands to reap a fair benefit from the Brazilian Blur’s absence. We were sky-high on Dragic last weekend; even tweeted our feelings to the world – and The Troll looked like a prophet after Dragic’s 32-point, six-trey effort last Monday night. Since then, though, his playing time has steadily decreased, with Jason Richardson and Jared Dudley both eroding Dragic’s minutes. We’ll recommend Dragic for deeper leagues, but hold off for now if your group has 12 or fewer teams.

By Buck Davidson
This entry was posted on Saturday, January 30th, 2010 at 3:16 pm and is filed under BASKETBALL, Buck Davidson, The Wire Troll. You can follow any responses to this entry through the RSS 2.0 feed. You can skip to the end and leave a response. Pinging is currently not allowed.