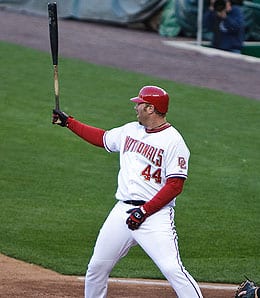 Regardless of his propensity for groping himself, Adam Dunn is a clear keeper.

I’m in a head to head keeper league that allows you to keep eight players. I have seven solid guys in Ichiro Suzuki, Chone Figgins, Adam Dunn, Ryan Howard, Justin Morneau, Josh Beckett, and Adam Wainwright. I’m stuck as to whether I should keep Aaron Hill or Roy Oswalt. I have two picks in the first round as well. Who should I keep?

I think that Hill has got to be your man. Starting pitching comes and goes, but a 30-homer guy in the middle infield just can’t be passed up. I’ve now done approximately 20 mock drafts this year and have found there to be plenty of options to fill out your pitching, but 2B, SS, and especially 3B, gets a tad thin fairly quickly. Shore up those slots as early as you can. With that great group of keepers and those two first round picks you should be in for a great 2010 season.

By Tim McLeod
This entry was posted on Saturday, January 30th, 2010 at 11:41 am and is filed under BASEBALL, Dear RotoRob, Tim McLeod. You can follow any responses to this entry through the RSS 2.0 feed. You can leave a response, or trackback from your own site.