The Wire Troll: The Moobys 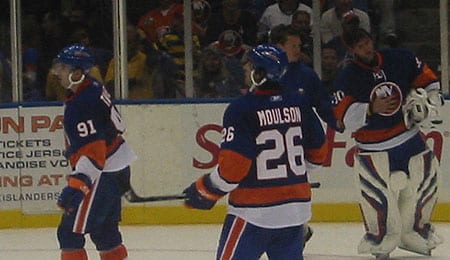 Yes, Matt Moulson has been helped by playing with John Tavares (left), but the bottom line is he can bulge the twine.

I can hear it now. People will ask just what in the wide wide world of sports is a Mooby? It is a made-up award name for Waiver Wire Pickup Of The Year. Yes, if you watched Clerks 2, you will also know it from there. At any rate, there were some excellent candidates for this award in the early part of the season and with February starting on Monday, now is as good a time as any to do this. When we looked around, several candidates immediately popped into our minds, but readers were kind enough to point out a few we forgot along the way.

After considerable thought, we narrowed this down to our three best choices and ultimately came up with a winner for this semi-prestigious award. There were problems in doing this, but after much thought and foresight, it can now be done. Below I present the nominations for the first ever Mooby for Best Waiver Wire Pickup of the Year.

Matt Moulson, LW, New York Islanders: Moulson literally came out of absolute no man’s land. People kind of chuckled when I first put him on The Wire Troll months ago, yet he is still the gift that keeps on giving and really has helped the Isles in their quest for a playoff spot in ways that the team’s brass could never have envisioned. This ninth round pick (263rd) has 20 goals on the year already, 33 points, and a +2. Playing with guys like John Tavares and Kyle Okposo have helped, but Moulson has a knack for hitting the back of the net. If only Los Angeles had held on to him a bit longer, but then again one man’s trash is sometimes another man’s treasure. Just think what could happen in his second year on Long Island, but then again Moulson will not be on many waiver wires next season.

Patric Hornqvist, RW, Nashville Predators: This time, it’s a seventh round pick who did little if anything, who makes our nominations. Honestly, he started off kind of inauspiciously as well. With only five goals in the first two months, no one saw the breakout coming except maybe for some really devoted Nashville fans. Sure enough December hit and Hornqvist started to take off. Ever since, he has 16 goals and like Moulson, he just seems to find the back of the net. The nice bonus is that he has a whopping 55 shots on goal in January. Hey, that would put him on pace for top five in the league if he fired pucks like that for the entire season. Hornqvist will be on many radars next year and really it was all because of a little extra boost in confidence (apologies if that sounds like one of those Enzyte commercials). I can see the trouble I am going to get into for that one.

Craig Anderson, G, Colorado Avalanche: To be fair, not a lot of people drafted him because they figured Colorado would be near the bottom of the league, but we were pretty much proven all wrong when the Avalanche stormed out of the gates and Anderson had 10 wins before most goalies could breathe. There was a little lull around Thanksgiving and part of December, but Anderson has a 26-13-5 record with a 2.45 GAA and a .924 save percentage with five shutouts. I guess getting shellacked with shots in Florida can really translate into wins in the right environment. Now he will definitely be picked higher in drafts next year and it’s safe to say won’t have a 5 per cent ownership rate like he did in the preseason. We almost put Antti Niemi from the Blackhawks here, but the platoon situation with Cristobal Huet made Anderson an easier choice on the palate.

So who won you may ask? Well thanks to Twitter, we did a tough unscientific poll on this one and believe me there were quite a few players named not on this list. What to do? What to do? Well, it was a very close vote and there will be some protest I am sure, but our winner overall was Moulson. Congrats to Moulson, who has been consistently good all year, and though Hornqvist was a very close second, Moulson was just a hair better and the fact that he was a ninth round pick is just icing on the cake.

Next week we welcome the second month of the year and start the process of working the wire for the Olympic Break. Until then, hopefully your teams are hanging in there and if you have any questions, do not hesitate to fire away. You can contact us through the handy “Fantasy Question” link in the left hand column.

By Chris Wassel
This entry was posted on Sunday, January 31st, 2010 at 10:55 am and is filed under Chris Wassel, HOCKEY, The Wire Troll. You can follow any responses to this entry through the RSS 2.0 feed. You can skip to the end and leave a response. Pinging is currently not allowed.