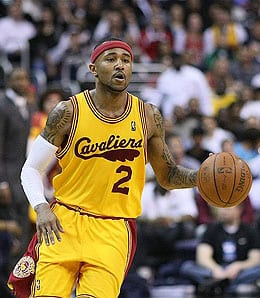 Mo Williams’ shoulder injury gives a couple of Cavs a chance to have value.

Welcome to The Wire Troll for Week 14. There are a few new faces on the board this week, including a couple who could seriously swing the tide of Fantasy fortunes as the NBA season reaches its mid-point. Of course, if you’re following the Troll on Twitter, you probably already know who these folks are – and have doubtlessly added them in a few leagues. For the rest of you, you’ll just have to wait a bit longer…and maybe you can use that time to hit the follow button so this kind of awkward moment doesn’t happen again.

In injury news, Blazer Brandon Roy is still hobbled by a bum hamstring, but is slated to return on Monday. Even so, he is a very risky play for those of you in those goofy weekly lineup leagues. The Troll learned once again why he has sworn off this format, as Paul Pierce’s knee injury – which looked pretty serious last Sunday – turned out to be a false alarm. Nice. Never. Again.

Monta Ellis of Golden State is dealing with a sprained right ankle he suffered on Friday, and there aren’t a lot of details available at this time. Get the latest (from The Troll on Twitter, maybe?) before you make a decision on him for this week. Charlotte’s Raymond Felton is also dealing with a sprained ankle, and there isn’t much information out there as to the severity. The Cavaliers’ Mo Williams will miss four-to-six weeks with a shoulder injury, meaning even more of the load will be carried by that No. 23 guy. Delonte West (when he comes back from his own health woes) and Daniel Gibson will watch LeBron James from the point guard position until Mo-Will returns.

Speaking of returns, Kevin Garnett scored 13 points, grabbed four rebounds and blocked two shots Friday in his first game action since way back on December 28. KG’s hyperextended right knee bears watching, but for now it looks safe to get him back in your lineups.

Robin Lopez, Phoenix Suns: In case you missed Lopez’s nationally televised breakout game last Monday, The Troll was right there to tweet about it. Lopez gives the Suns a strong low post defensive presence that former starter Channing Frye simply cannot provide, and the youngster should see some solid minutes for at least the near future. In his first three games as a starter, Lopez has averaged 16 points, 5.7 rebounds and 1.7 blocked shots in just over 28 minutes per game. He’s not a good free throw shooter, and his moderate volume could make that a bit problematic, but Lopez is worth adding in the majority of leagues as long as he’s the starter in Phoenix.

Ben Wallace, Detroit Pistons: While Big Ben’s 8.4 points per game in 10 January outings doesn’t qualify as an offensive explosion, when combined with his 8.7 rebounds, 1.2 steals and 1.3 blocks over the same period it merits Wire Troll notice. Wallace will have stretches like this, but figures to go back to his five-to-six point per game ways before too long. Be ready to drop him when that happens. Also, keep in mind that you, I and Three Random Dudes from your office probably shoot free throws better than Big Ben….though his volume is low enough that it really doesn’t sting too badly.

Carlos Delfino, Milwaukee Bucks: Delfino has stepped up to try to fill the void created by Gossamer guard Michael Redd’s season-ending knee injury, and he has been chugging along quite nicely of late. Over the five-game period from January 15-22, Delfino averaged 16.4 points, eight rebounds and 2.8 treys. We’ve seen this before with him: flashes of semi-brilliance interrupted by long stretches of mediocrity, but this feels a bit more permanent given the Bucks’ struggles this season and his massive PT of late. If Delfino can sustain this level of play, he could be a late-season difference-maker in many leagues. That alone makes him worth a speculative grab.

Craig Smith, Los Angeles Clippers: What madness is this? After being almost invisible over the first two-plus months of the season, Smith has been on a very nice roll lately, averaging 12.1 points and 4.6 rebounds in his first 10 games in January. Caution is advised – this is Craig Smith, after all – but the burly power forward is worth adding in deep leagues while he’s playing at this level.

Kris Humphries, New Jersey Nets: Deep leaguers should know that Humphries has found new life in Jersey, averaging 12.6 points and seven boards in his first five games. The former Dallas Maverick is coming off the bench for an average of 23-plus minutes, but his solid play should earn him more run as the Nets sink deeper into the NBA cellar. Give Humphries a look if your league consists of 14 or more teams, or if your 12-teamer is very deep.

Corey Brewer, Minnesota Timberwolves: Brewer has quietly (which is the way non-Brett Favre-related things happen in Minnesota these days) cobbled together a nice little season, and has stepped up his play in January to the tune of 14.6/4.0/2.2 with 1.5 treys, 1.0 steals and 1.1 blocks through 11 games. That’s quality stuff, gang, and it’s good enough to where we can overlook his mediocre shooting percentages. Despite his solid play, Brewer is owned in only about 40 per cent of Yahoo! leagues, so grab him if he’s out there.

Daniel Gibson, Cleveland Cavaliers: With Mo Williams sidelined with a sprained left shoulder, West took over as the starting point guard Thursday night…and promptly fractured the ring finger on his shooting hand. Mr. Violin Case is day-to-day, but will probably miss at least a couple of games. Let’s be nice and say that Delonte is not the most durable (or stable) guy out there. Enter Gibson, who is next in line to fill the point guard spot in the lineup while King James runs the offense. Don’t set the bar too high for Gibson, who is more of a two than a point, but he has always been a solid three-point shooter, and should contribute at least a few treys every night. Also, don’t overlook Anthony Parker, who had some fine stretches running the point for the Raptors last year; he could be a dark horse while Mo is ailing.

Flip Murray, Charlotte Bobcats: Felton suffered a sprained ankle Friday night, and Murray posted 11 points and nine assists in his stead. Flip is a serviceable NBA guard, but won’t score many points with ball-hog Stephen Jackson in the backcourt with him. Keep an eye on Felton’s status; if his ankle will keep him out for an extended period, Murray should see a nice boost in Fantasy value. Teammate D.J. Augustin would also see an increase in minutes, but his ’09 campaign has been so disappointing it’s tough to recommend him at this point. Still, the Bobcats are rumoured to be shopping him, so it would behoove them to showcase the former top 10 pick.

By Buck Davidson
This entry was posted on Saturday, January 23rd, 2010 at 1:46 pm and is filed under BASKETBALL, Buck Davidson, The Wire Troll. You can follow any responses to this entry through the RSS 2.0 feed. You can leave a response, or trackback from your own site.