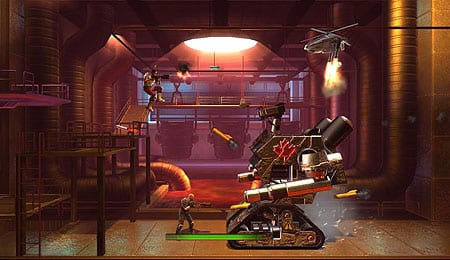 An evil Canadian robot? What’s that all aboot?

Before console gaming became commonplace, video arcades were filled with games that were basically designed to do one thing: make you spend quarter after quarter to keep playing. From those humble beginnings spawned unmerciful side-scrolling shooters like Contra and Metal Slug, both of which can clearly be considered forerunners to the recently released Matt Hazard: Blood Bath and Beyond. The run-and-gun title is dripping with self-deprecating humor, nods to classic gaming franchises and a ton of nearly non-stop action, but it’s not without its drawbacks.

In an effort to mimic old school shooters you’ll find that both moving and aiming are controlled via the left stick while the right stick is unused. This works perfectly well when your enemies are in front or behind you, but when the screen is filling up with additional foes above, below and in the background as well, you’ll quickly find this decision may not have been a wise one. This is because to shoot at a target above you and to the right you’ll need to move the left stick in that direction, causing you to run forward while shooting — thereby making you less accurate. You can hold down either of the bumpers to simply aim your gun, but in that case you become a stationary target.

Another odd decision was designating a face button (X) as your primary shooting/melee attack. The right trigger, usually reserved for gun fire, instead tosses grenades while the left trigger allows you to fire into the background a la Shadow Complex. There is some platforming to be found as well, which you’ll need to navigate by pressing “A” to jump. Rack up enough kills and you’ll fill your “Hazard Meter.” Once full you can trigger “Hazard Time,” wherein you’re essentially invulnerable, by hitting “Y.”

The learning curve isn’t very steep here, but I can’t help but feel that things could’ve gone a lot more smoothly if aiming had been handled via the right stick. Too often I felt I was being forced to choose between accuracy and maneuverability, which is a tough tradeoff in a game that can be pretty unforgiving, particularly on the higher difficulty settings.

While Matt Hazard: Blood Bath and Beyond makes repeated jokes about its low budget nature, the visuals here are anything but. The developers clearly relished in the opportunity to make a game that looked to spoof so many other games and movies. You’ll see plenty of clever nods to games like Super Mario Bros., BioShock, Mirror’s Edge and even Elevator Action. There’s simply a ton of effort and detail work that went into the level design, which really pays off in spades.

The characters, enemies and bosses all look good. However, when it comes to the character models it’s really all about the death animations. The game makes heavy use of the rag doll effect, causing defeated enemies to slump to the ground amid copious amounts of bloodshed. Given the sheer number of foes you’ll be facing it was very important for things to remain fresh when it came to dispatching them, and the game does an excellent job in that department.

Another victim of the game’s supposed shoestring budget is an almost complete lack of voice acting. The game’s story advances via text boxes with the only actual spoken dialogue coming in the form of some fairly witty one-liners from Matt Hazard himself. Those one-liners actually came up a bit too often for my liking, however, dulling the humour. The sound effects and background music are fine, though the game does little to distinguish itself in either area.

The game casts you in the role of Matt Hazard, who was the star of numerous fictional titles over the years. Now, one of your old nemeses, General Neutronov, has traveled through time and captured the 8-bit pixilated version of you and is planning to destroy him, meaning you’ll never exist to star in those other games. To rescue yourself you’ll need to warp into various games (they’re also fictional) in an effort to defeat the dastardly villain. Along the way you’ll be treated to numerous spoofs of real games, not to mention some sweet movie references — after all, what’s a time traveling plot without a DeLorean?

While the premise — kill everything that moves — remains constant from one level to the next, the environments vary greatly. Beyond waves of ever changing adversaries, you’ll also do some light platforming and face several old school boss fights. The screen can get pretty busy at times, particularly during sequences when you’ve got to destroy everything to advance, but slowdown is non-existent. It’s ultimately a testament to the variety of enemies and environments that the game continues to feel fresh for the duration despite a very simplistic formula.

Things move along at a brisk pace, though some may find the game’s brevity to be a negative as it spans only eight chapters and can be finished in a couple of hours. Matt Hazard: Blood Bath and Beyond does support local co-op, but surprisingly there’s no online multiplayer to be found. That means the only way to measure your skills with other gamers is via the leaderboard.

Although the overall experience is strong, there are some annoying items that will come up as you play through the game. Unquestionably the most annoying is if you die in the wrong position you may find yourself getting spawned into one or more additional deaths because the game drops you into water or some other instant death location in the environment. The game also locks as you move forward, meaning you can’t backtrack. This can be frustrating if you’re trying to nab a power up or collectable.

For those looking to squeeze more replay value out of this fairly modest package, each level does contain three hidden cartridge pieces for previous Hazard games. Find all three and you’ll be able to see the box art from the main menu and get a little back story for each title. There are also coins to be found, which allow you to play Ragdoll Pachinko after levels for additional bonus points. Three difficulty levels are present, though the hardest (accurately entitled “Fuck This Shit”) is for masochists only. You’ll also unlock a mini-game after completing the story based on the lunar landing level.

With challenging gameplay that borders on seemingly impossible on the highest difficulty, Matt Hazard: Blood Bath and Beyond won’t be for everyone. The lack of online co-op is unfortunate, and the game comes in on the short side considering the price tag ($15). That being said, I’ve had fun every time I’ve fired it up, and it’s a great ride for those gamers that were weaned on Contra and the like.

By Herija Green
This entry was posted on Saturday, January 23rd, 2010 at 7:40 pm and is filed under Herija Green, Video Game Reviews. You can follow any responses to this entry through the RSS 2.0 feed. You can leave a response, or trackback from your own site.