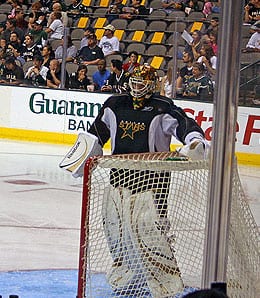 Alex Auld is seeing more time between the pipes thanks to Marty Turco’s struggles.

Okay, maybe it’s time to put all those jokes aside. After all the rehabs, setbacks, and snarky comments about an undeserved contract, Rick DiPietro is back fighting for his starting gig. His stats so far? Two wins, one loss and no overtime losses with a .926 save percentage, a 1.96 GAA, and a shutout. Not bad for a guy who used to be a living punchline. You need a starting goalie? Here’s your chance, though things will probably turn into a .500 situation simply because DiPietro’s on the Islanders.

More goalie news: it looks like Marty Turco’s time in Dallas is coming to an end. While no team’s going to trust Alex Auld as a full-time starter over the long haul (that experiment failed too many times), he’s a good stop-gap solution as the Stars re-evaluate their goalie situation. Auld plays best in spurts, and he’s getting playing time right now. This produces two interesting solutions for the Fantasy owner: Auld, who’s probably overlooked by most people, can be a short-term boost. Turco is probably getting dropped in a number of leagues, and any starter has some value over the long haul if you get points for saves. Keep an eye on the Dallas situation, and if you need goaltending, think short-term with Auld and see if anyone drops Turco for a long-term depth goalie. Just don’t ask Auld to play the puck.

While Cristobal Huet isn’t embroiled in a goaltending controversy like he was last year with Nikolai Khabibulin, Antti Niemi — he of the many vowels — is proving himself to be a capable and reliable backup. Even Huet has remarked about Niemi’s recent play, and he’s a good short-term ride, especially with a packed schedule over the next two weeks. Huet has his ups and downs, and the goaltending situation has been a source of heartburn in Chicago every now and then, so it makes sense that Niemi will get a longer look than most backups.

Out west, I’ve talked about avoiding the San Jose’s streaky secondary scoring (try saying that five times fast). Ryane Clowe is the ultimate secondary Fantasy teaser, capable of scoring goals, getting PMs, and putting up a lot of shots on net, but about one-third of the time, and only in big chunks at a time. He’s starting to get hot again, which means his value should rise over the next dozen games or so. That would be a good time to package him in a trade for the stretch run.

Sticking in San Jose, Dan Boyle’s going to be out a few games. While there has been plenty of reason to stay away from Rob Blake this season, he’s shown some of his old form in the past few games and should only get more power play time with Boyle out. Beware of San Jose’s inconsistent power play, though — it’s fantastic on the road and mediocre at home. That should gauge when you play Blake.

Who would have thought the Phoenix Coyotes would still be going strong this far into the season? We’ve talked about streaky Radim Vrbata before, and he’s on another one of those rolls right now. Most Coyotes outside of Shane Doan and Ilya Bryzgalov fly under the radar, so you shouldn’t have a problem picking up Vrbata while he’s still on fire — and feel free to drop him when he starts to cool down. There’s a reason why the Coyotes don’t have a single guy eclipsing 40 points.

Speaking of streaks, look at one Tim Connolly. The Buffalo Sabres don’t quite have the sexy offense they did a few years ago when Daniel Briere and Chris Drury sold them a ton of merchandise, but Connolly is showing that when he’s healthy, he’s a stud. December and January have been extremely kind to Connolly; however, my Spidey-sense tells me that he’s peaking right now. He’s due for an injury or a slump, and his trade value is at an all-time high.

Ranger pundits thought the team had turned a corner with 14 goals in two wins against Montreal and Tampa Bay. These games, though, were sandwiched between three games where the Blueshirts only managed to pop in one goal. While it might be tempting to pick up a sleeper hopeful like Brandon Dubinsky, you’ve got better gambles elsewhere.

Eric Staal had a successful first game wearing the captain’s C; keep an eye out to see if this promotion elevates Staal’s game — and how it trickles down to the rest of his teammates…Remember how Bill Guerin’s stats took off after he went to Pittsburgh at last year’s deadline? It’s time to start scouting the lower tier for playoff-push trade bait…Are we ready to say Evgeni Malkin is back for good? I wouldn’t go that far yet, but he is trending upward and Malkin’s two point-less streaks of three games and four games should be a thing of the past thanks to the return of his confidence.

By Mike Chen
This entry was posted on Saturday, January 23rd, 2010 at 8:06 am and is filed under HOCKEY, Ice Chips, Mike Chen. You can follow any responses to this entry through the RSS 2.0 feed. You can skip to the end and leave a response. Pinging is currently not allowed.