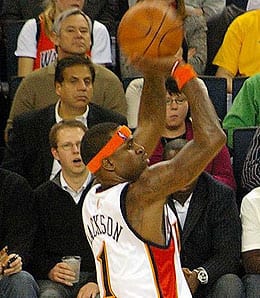 Considering the Bobcats’ turnaround since Stephen Jackson arrived, is he worthy of MVP votes?

It’s been a while since I checked in with some basketball content, so I thought this morning I’d offer a few random observations.

The Clippers came very close to pulling off a huge win over the Cavaliers Saturday, but Cleveland’s big second half propelled it to a one-point win. With Chris Kaman still missing in action because of his back, not surprisingly it was a lack of rebounding that doomed LA. Cleveland owned a +5 edge in boards, including a whopping 14-4 advantage on the offensive glass. Kaman remains questionable for Monday, but obviously the Clippers need their main man back as soon as possible, because no team can expect to be earning wins when they surrender that many offensive rebounds to their opponent.

Kevin Garnett (knee) is making progress, working out on a stationary bike on Saturday. Coach Doc Rivers believes Garnett is on pace to return to the Celtics on Friday – great news for a team that has struggled in his absence. Boston is still miles ahead in the Atlantic, but its lead over Toronto is down to eight games. And that lead would be four games had the C’s not beaten the Raptors twice in the past couple of weeks.

Kevin Martin’s shooting touch is obviously still a bit off, but it was nice to see him return to play in back-to-back games this weekend. He scored 23 points Saturday, so he’s coming around to his volume scoring ways, but Fantasy owners have to be thrilled with the fact he’s nailed five treys and gone 17-for-17 from the line in his two games back. I imagine it’s going to take another week or so before you see Martin playing heavy minutes, but they will come, along with his big-time scoring totals. The question of whether he finishes out the season with Sacramento remains a valid one, however.

As is the case with many big young men, Roy Hibbert is playing seriously inconsistent ball lately, but after his major stinker against the Raptors last week, he’s turned things around big time. Saturday, Hibbert went off for a career-high 27 points, adding 10 rebounds and another three blocks – a game after his block party against the Nets. Hibbert’s shooting percentage has bounced back after some struggles in December and his FT shooting just keeps getting better and better. He hasn’t missed a single game this season, and the fact that he’s been getting more touches despite the fact the Pacers are a deeper team this year is a great sign. It’s all about the blocks and boards with big men, and Hibbert is showing tremendous progress in both those areas.

Remember how the Bobcats couldn’t score to save their lives at the beginning of the season? Okay, it was against the Celtics, but Charlotte scored just 59 freaking points in their season opener. Well. Saturday, they scored 74 – by halftime. You can trace the team’s offensive turnaround to the trade that brought in Stephen Jackson. I always knew S-Jax was a very solid, if often underrated player. I just had no idea he could make this kind of difference to a team. We’re talking an MVP-type of difference. As crazy as that sounds, he’s doing to deserve some MVP votes this year if this continues.

Speaking of teams with changing fortunes, what the hell has happened to the Suns? You may recall that Phoenix was one of the most pleasant early-season surprises in the NBA, jumping out to a 14-3 start. Well, the Suns have gone 10-14 since then, including dropping the first three games of their current four-game road trip that concludes Monday in Memphis. And check out how they’ve done it: Wednesday, the Suns blew a 24-point lead in Indy; Friday, they let a late lead slip away and were beaten by Jamal Crawford’s trey at the buzzer to lose by one; and Saturday, they were overwhelmed by the Bobcats, who jumped out to a 21-point lead after one quarter and never let the Suns rise from the mat. The Lakers, despite all their injury issues, are now pulling away with the Pacific Division, and the Suns have also been passed by the Spurs and Blazers. And now the Jazz – playing better of late – are breathing down Phoenix’s back as well.

The Oklahoma City Thunder got a real test last week, with a very tough three-game stretch against San Antonio, Dallas and Miami – a trio of quality opponents that would act as a measuring stick against this young team’s progress. Well, on Wednesday, the Thunder showed real character in coming back from a big early deficit at home against San Antonio to force OT, but wound up losing by a point. On Friday, OKC travelled to Dallas and it was the one that blew an early lead. The team came back late in the game, but wound up losing by one point again. Saturday, back at home against the Heat, the Thunder jumped on its opponent early and never really let Miami in the game, earning a much-needed 18-point win led, as per usual, by Kevin Durant. At one point, OKC built the lead to 20 points, allowing KD to check out early for some valuable down time.

Roger Mason Jr. came off the Spurs’ bench for 17 points, three 3-pointers and a steal Saturday, helping to key a late comeback that was ultimately in vain. This was a nice performance by the veteran shooting guard, but note that he played just 19 minutes. Mason remains on the periphery of Fantasy value. His abundance of trifectas (1.9 per game in January) is always tempting, and overall he is getting more action lately, but he simply doesn’t do enough to warrant a spot on your team on an on-going basis. Now, if Manu Ginobili gets hurt or Coach Gregg Popovich gets over his love affair with current starting two-guard Keith Bogans – well, then Mason will be a useful addition. Until then, however, you’re best advised to keep watching his long bombs on the waiver wire.

Meanwhile, Memphis showed great character in holding off the Spurs Saturday. Many thought the Grizzlies would be an absolute mess this year, but they moved quickly to divest themselves of Allen Iverson, and Zach Randolph has been a revelation. So as shocking as it sounds, Memphis finds itself just a half game behind the Rockets for eighth place in the Western Conference. Could the Grizzlies sneak into the playoffs this year? Suddenly, that doesn’t seem so far-fetched a scenario.

By RotoRob
Tags: NBA
This entry was posted on Sunday, January 17th, 2010 at 11:10 am and is filed under BASKETBALL, NBA Today, RotoRob. You can follow any responses to this entry through the RSS 2.0 feed. Both comments and pings are currently closed.