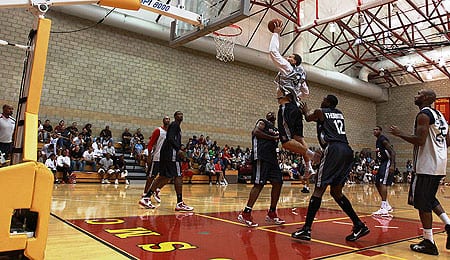 Blake Griffin (top) will miss his entire rookie season for the Clippers.

Welcome to The Wire Troll for Week 13. We’ll kick off a news-heavy week by announcing that the Troll is now part of the Twitter information network. Follow us @WireTroll to stay up to date on all of the news surrounding potential waiver wire gems just waiting to be mined. If it’s waiver-wire worthy, we’ll be sure that you hear about it just as soon as we do. Look forward to seeing – and tweeting – you soon.

Gilbert Arenas pleaded guilty to gun possession charges last week, and could very well be facing a short stay in the calaboose. No matter how this plays out, it appears Agent Zero’s NBA season is over (though there is speculation he’ll sign with the Knicks if he’s not suspended for the rest of the year) – and stay tuned to see if he could be facing an even longer suspension.

In injury news, L.A. Clippers rookie forward Blake Griffin will indeed miss the entire season after suffering a setback in his rehab from a broken left kneecap suffered in the preseason. Go ahead and drop him in non-keeper leagues.

Portland’s Brandon Roy, Utah’s Deron Williams and the Clips’ Chris Kaman are all day-to-day with injuries, but none appears to be of the long-term variety. Until they get back on the court, they are definitely risky plays in weekly lineup leagues. Kevin Garnett of Boston is expected back soon (January 22 and 25 have been mentioned), but he should be benched this week.

The Lakers Pau Gasol threw in 20 points Friday night in his first game back from a hamstring injury. He should be a safe start this week, and hopefully you took our advice and sold high on Lamar Odom. Sacramento sharpshooter and Gossamer guard Kevin Martin returned to the lineup Friday, scoring 19 points, including a pair of treys. It will be interesting to see how Kev-Mart and Tyreke Evans meld in the Sacramento backcourt (or if Martin will even finish the season as a King, given the trade rumours). Denver’s Carmelo Anthony also returned after missing five games, and looks like a safe start going forward.

Samuel Dalembert, Philadelphia 76ers: Shameless plug coming — Those of you following The Wire Troll on Twitter received the heads-up on Sammy D. way back on Wednesday, but here’s the scoop for the rest of you. Dalembert has averaged 12.4 points, 13 boards and 2.7 blocks through his first seven games in January – while shooting a ridiculous 75 per cent from the field. He’ll certainly come back down to earth, but while he’s on this kind of a roll, Dalembert should be starting in every Fantasy format. He is reportedly flying to his native Haiti this week to aid the recovery efforts, but is not expected to miss any games.

Anderson Varejao, Cleveland Cavaliers: Shaquille O’Neal’s minutes have been dropping steadily this month, with Varejao the prime beneficiary. The bushy-haired Brazilian has averaged 10.4 points and 9.3 rebounds with over a steal and a block per game thus far in January, and should be a great Fantasy roster-filler for big man stats going forward; just don’t ask him to try to guard Steve Nash again…his ankles won’t take too many more of those.

DeJuan Blair, San Antonio Spurs: After we featured Blair in the Troll two weeks ago, he obliged us by going directly into the tank. Not the clean, happy, Petticoat Junction opening titles kind of tank, either – rather the Mike Rowe in a Tyvek suit, Dirty Jobs, 15 meaningless minutes per game kind of tank. Blech. Well, the Spurs have once again granted some solid run to Blair, and the youngster has responded with back-to-back double-doubles – including a 28-point, 21-rebound, two-block monster back on Wednesday. The talent’s there, and the Spurs figure to rest Tim Duncan more and more in the second half, making Blair worth a grab in deeper leagues.

Kenyon Martin, Denver Nuggets: The veteran has been on a nice little roll of late, aided in no small part by the injury to Anthony. Melo is back, so look for K-Mart’s scoring to drop off – but he should remain a fine source of boards, blocks and steals. The only thing that keeps him from being a global Fantasy starter is his atrocious free throw shooting, which currently stands at 59.2 per cent.

Martell Webster, Portland Trail Blazers: Even before Roy’s injury, Webster was putting up some nice numbers in January, posting 18.9/6.7 with a stellar 50.7 percentage from the field – and an absurd 3.7 treys per game. While it’s tempting to think that this train will pull into the station soon, remember that Webster is still only 23 years old and seems to be a good fit in the Blazers’ offensive scheme. Don’t set the bar too high, but something along the lines of 12-to-13 points, 6-to-7 boards and 1.5 treys per game the rest of the way is not an unreasonable expectation.

Boris Diaw, Charlotte Bobcats: Diaw was all but left for dead in December, averaging just 8.7 points and a feeble 3.2 rebounds last month, but the versatile frontcourt man has turned things around. Through seven games in January, he has averaged 11.1 points, 6.4 rebounds and a point guard-esque 5.3 assists. With gunners Gerald Wallace and Stephen Jackson around, Diaw is probably at his scoring ceiling, but he can dish the dimes as very few forwards can. We’d expect him to be a meaningful contributor in every Fantasy stat-cat save free throw percentage the rest of the way.

Luke Ridnour, Milwaukee Bucks: When Gossamer Guard Michael Redd went down with yet another knee injury, Fantasy owners looked to players like Charlie Bell and Carlos Delfino to pick up the scoring slack. Lo and behold, it’s been Luke who has been the force the Bucks have sorely needed. In the three-plus games since Redd’s season-ending (and potentially career-ending) injury, Ridnour has averaged 13.5 points, 7.3 assists, 1.3 treys and 1.5 steals while coming off the bench. Neither Ridnour nor starting point Brandon Jennings is a great fit physically for the two-guard spot, so we’d expect Luke to remain in a reserve role (albeit a minutes-heavy one) for at least the near future.

Ronnie Price, Utah Jazz: D-Will’s balky wrist looks to be a short-term thing, but Williams’ owners might want to make a move on Price if they’re in a fairly deep league. Ronnie posted 13 points, two assists and a steal the night D-Will had to leave early, and the veteran guard has averaged 12 points and 7.5 dimes in his two starts this season. He’s not a special player, but Price’s Fantasy value should skyrocket if Williams suffers a serious injury. D-Will has not been the most sturdy of players the past two seasons, and Price is a solid insurance policy.

By Buck Davidson
Tags: Kenyon Martin
This entry was posted on Saturday, January 16th, 2010 at 4:45 pm and is filed under BASKETBALL, Buck Davidson, The Wire Troll. You can follow any responses to this entry through the RSS 2.0 feed. Both comments and pings are currently closed.