The Wire Troll: Mr. Big Shot is Back 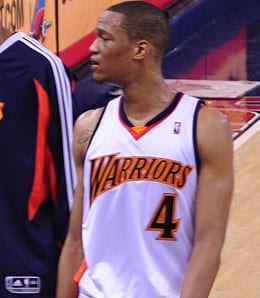 Welcome to the Wild Card Weekend version of The Wire Troll. The big news this week revolved around the mind-boggling exploits of one Gilbert Arenas, AKA Agent Zero – whose involvement in a handgun incident and subsequent breaking out of another type of “hand-gun” last Tuesday during pre-game warm-ups – earned him an indefinite suspension from the NBA. There has been a ton of real and cyber-ink already spilled about this situation, so we’ll skip the editorial histrionics and focus on the Fantasy implications a bit further on. Don’t bother trying to glean any “personal” takes from Arenas’ prolific Twitter account, as Agent Zero has apparently shut it down. Probably not a bad move. On we go.

Injury-wise, Laker Pau Gasol is still dealing with a right hamstring strain, but may return this week. Deron Williams of Utah has missed the past two games with a sprained right wrist, but it doesn’t look like he’ll be out for an extended period. Ronnie Price starts in his place. It looks like Golden State’s Anthony Randolph will be lost for several weeks after he apparently suffered a fractured ankle Friday night. MRI results were still pending when The Troll went to cyber-press, but it looks like the kid will be down for 4-to-6 weeks.

Several stars returned to action this week, including the Pacer forward Danny Granger (19 points, six boards and an awful 7-for-19 from the floor) and Troy Murphy (21 and five with five treys) on Friday. Granger and Murph’s return pretty much kills the Fantasy value of Luther Head – while Roy Hibbert’s Fantasy owners were happy with their man’s 15-6-3 with three blocks that same night. Toronto’s Jose Calderon is back, but he looks to be sharing time with Jarrett Jack at this point. Both players should be rostered, but keep an eye on the minutes distribution going forward. Note that the Spanish Fly didn’t have big numbers off the bench Friday, but he was on the floor as the Raptors rallied from a big deficit.

Chauncey Billups was back on the court Friday, tossing in 23 points and handing out five assists in a Nugget victory. Unfortunately, the Nugs were missing Carmelo Anthony, whose bruised right knee has kept him out four straight games. Melo expects to be back Monday, making him a tricky lineup call for you blokes in those weekly lineup leagues some folks find enjoyable. Go ahead and run Paul Pierce out there this week, as the Celtic star was back on the floor this week – and appeared in fine fettle, to boot. Not so for Kevin Garnett, who remains sidelined with a hyperextended right knee. Orlando’s Vince Carter suffered a shoulder injury Friday night, but the extent is not known at this time. He’s being called day-to-day by the team, but be sure to get the latest before you start VC this week.

Lastly, get out there and cast a few intelligent votes for the NBA All-Star team. It’s an abomination that Steve Nash, Deron Williams and Chris Paul all trail Tracy McGrady in the fan voting. C’mon people – step up and let’s get the right players on the court. Not slagging T-Mac here, but he has played only 41 games the past two seasons, and is currently on indefinite leave from the Rockets. Sakes…don’t people read box scores anymore?

Rasheed Wallace, Boston Celtics: As long as Kevin Garnett is sidelined, Wallace should continue to post Fantasy-relevant numbers. ‘Sheed has struggled with his shot this year, but his rare ability to provide Fantasy help in boards, blocks, steals and treys makes him worth a pick-up as long as he owns a starting gig…or if Kendrick Perkins runs, ahem, afoul of any more chicken tenders. It’s not certain how long Garnett will be out, but the last week of January is looking like a reasonable expectation.

Lamar Odom, Los Angeles Lakers: Odom has once again thrived in Gasol’s absence, averaging 14 points, an absurd 15.8 rebounds and 6.3 assists in the four-plus games that thr Spaniard Gasol has missed. Pau’s gimpy hammy figures to limit him even after he returns (and that could be as early as this week) so Odom should be added if he is somehow available in your league. We’re also mentioning Odom here since he’s a great sell-high candidate if you can find a willing trade partner.

Mike Miller, Washington Wizards: Miller returned from his shoulder injury Friday, scoring six points, grabbing six boards and dishing six assists. He also turned it over five times, though, and attempted just five shots. Miller’s role figures to increase in Arenas’ absence, making him worth a grab in just about every Fantasy format. Consistency isn’t his game, but he generally figures out a way to put up serviceable numbers in some category or other. Miller won’t be a difference-maker for you, but makes a solid roster-filler style of player.

Corey Maggette, Golden State Warriors: Other than the general aversion to Warriors most Fantasy owners tend to have, it’s a mystery to The Troll why Maggie is still available in about 20 per cent of Yahoo! leagues. All he has done over the past month is average 23.7 points, 6.7 boards and 2.4 assists – while shooting a ridiculous .581 from the field and a very high-volume .852 from the stripe. Good night, people, what else do you want? The Nellie Factor doesn’t seem to be in play, as Maggette has played more than 30 minutes in 12 straight games.

Wilson Chandler, New York Knicks: Like Maggette, Chandler has been absolutely on fire of late, but that hasn’t translated into a big boost in Fantasy ownership. Chandler has averaged 24.7 points, 9.3 boards and four dimes per game so far in January – while shooting a stellar 54.6 from the field on 18.3 attempts per game. It’s unreasonable to expect that kind of production to continue, but remember that Chandler is still only 22 years old; it’s possible that he could be raising the Expectations Bar a notch or three. He is available in about 20 per cent of Yahoo! leagues, and, oddly enough, about 10 per cent of the 10-team format ESPN groups. If you’re lucky enough to see him on your wire, don’t let him stay there another minute.

Rafer Alston, Miami Heat: Alston signed with the Heat Thursday, and made his first appearance in the starting lineup the following night. Skip played over 34 minutes, scoring 10 points, dropping two treys and dishing four assists. It looks very much like Alston will man the point for the Heat the rest of the way, and his veteran presence should stabilize the Miami attack – and draw at least some attention away from Dwyane Wade. The Heat plays a brutal road schedule in the second half, and it will need guys like Alston to see them through what figures to be a grind to the finish line. Add Alston if you need help in threes, assists or steals – but be prepared to deal with his crummy shooting percentages.

Randy Foye, Washington Wizards: Foye averaged 19 points per game in his first two outings after Arenas’ ouster, and it looks like he’ll inherit a lot of Agent Zero’s playing time. Foye can crank up the shots, and he’ll dish quite a few dimes when he’s going well – but his 41.2 per cent mark from the field this year is a bit scary. We’d look for his three-ball to pick up now that he’ll see more minutes, and he’s a solid addition if you need backcourt help (or if you own Arenas). Point guard Earl Boykins (all 65 inches of him) might cut into Foye’s minutes somewhat, but Randy’s ability to play both the two and the point makes him a much safer pick-up at this juncture.

J.J. Redick, Orlando Magic: If – and only if – Carter misses time with his shoulder injury, Redick could be a viable source of three-pointers in just about every Fantasy league. Even if Vinsanity is okay, Redick has been on enough of a mini-run lately to draw the interest of owners in deeper leagues. The night VC went down after playing only 10 minutes, Redick tossed in 14 points, canning three from downtown. Mickael Pietrus could also be in the mix, but he’s more of a three than a two – and maddeningly inconsistent.

At long last, The Wire Troll is on Twitter! Follow us @WireTroll for additional Fantasy basketball insight during the week.

By Buck Davidson
This entry was posted on Saturday, January 9th, 2010 at 4:36 pm and is filed under BASKETBALL, Buck Davidson, The Wire Troll. You can follow any responses to this entry through the RSS 2.0 feed. You can leave a response, or trackback from your own site.