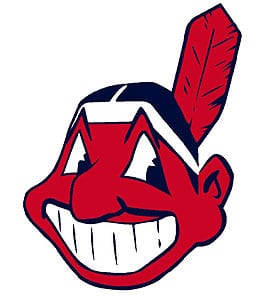 Some believe that this racist logo is the real reason the Indians have gone over 60 years since their last World Series title.

On Thursday, we touched on the Indians’ plight heading into 2010, focusing on the health of owner Larry Dolan, who bought the team from Richard Jacobs almost 10 years ago. But one thing we failed to allude to is “the curse,” something I was reminded of recently.

The Indians last won the World Series in 1948 – over 60 years ago. About the same time, according to a recent article I read, they started using the controversial Chief Wahoo logo.

The writer of this article, Ed Rice, is somewhat of a Cleveland Indian expert, having rewritten the Tribe’s media guide back in 1999 and a few years later, writing the book Baseball’s First Indian, a copy of which he says he “hand-delivered to the team’s vice-president of public relations, Bob DiBiasio” to make sure the team got a copy.

Rice wrote that if the team is cursed – as many suspect – it’s simply justice.

“Shame on Cleveland,” Rice wrote, for wearing the “insidious” logo.

If this is truly what ails the Indians, then the solution to their problems is easier than anyone could have imagined.

By RotoRob
Tags: Cleveland Indians
This entry was posted on Friday, January 8th, 2010 at 11:34 am and is filed under BASEBALL, RotoRob, Team report. You can follow any responses to this entry through the RSS 2.0 feed. Both comments and pings are currently closed.