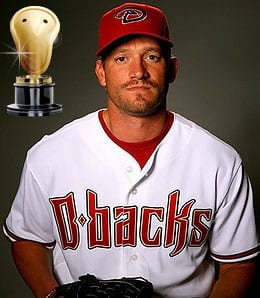 On Christmas Day, we unveiled the 2009 RotoRob Baseball Awards, but one player we failed to acknowledge is Scott Schoeneweis, who deserves kudos for the courage he showed last year.

Schoeneweis had to endure something no one – player or otherwise – should have to, when his wife died suddenly in late-May. He spent some time on the bereavement list, but just a couple months after returning, he had to again leave the Diamondbacks to deal with depression in the fallout of his tragedy.

Schoeneweis came back in September, and although statistically this was a lost year for him, obviously his mind was on more important issues than baseball.

For showing courage and helping put Fantasy baseball and life into perspective, Schoeneweis gets a Bonus 2009 RotoRob Baseball Award.

By RotoRob
This entry was posted on Sunday, January 10th, 2010 at 10:15 am and is filed under BASEBALL, RotoRob, RotoRob Awards. You can follow any responses to this entry through the RSS 2.0 feed. You can leave a response, or trackback from your own site.