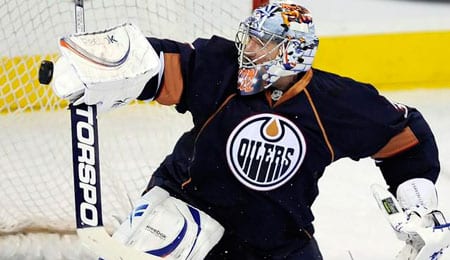 With Nikolai Khabibulin probably done for the season, Fantasy owners are left scrambling for goalies. (AP)

I am in a single-season, 12-team hockey pool. I have to dump Nikolai Khabibulin and use one of my two remaining waiver moves for the season (so I need it to count).

Howard is your first answer, without a doubt. While Chris Osgood is off whining to the Detroit press, Howard’s started the majority of games recently for the Wings (20 of the last 26). Even though the Wings are floating around the playoff bubble, they’ve still got a ton of upside this month with many of their injured players coming back soon.

My second choice would be Rinne. His numbers are ordinary compared to last season, but he’s in a 1A/1B situation with Dan Ellis. Barry Trotz was recently quoted as saying he trusts both guys, but Rinne has more raw talent than Ellis. If Trotz decides to stick with one guy, he might run with Rinne once his game stabilizes a bit. I think this situation is less volatile than the Anaheim goaltending situation, and the Predators are playing better as a team.

Your alternate pick would be Halak, as he played well enough to be recognized as the Habs’ Player of the Month for December despite the fact he is still considered Carey Price’s backup. Halak may generate some trade interest in the coming weeks; if that’s the case, he could wind up getting the majority of starts on his new team, although no one knows where that might be.

By Mike Chen
This entry was posted on Wednesday, January 6th, 2010 at 9:17 am and is filed under Dear RotoRob, HOCKEY, Mike Chen. You can follow any responses to this entry through the RSS 2.0 feed. You can leave a response, or trackback from your own site.