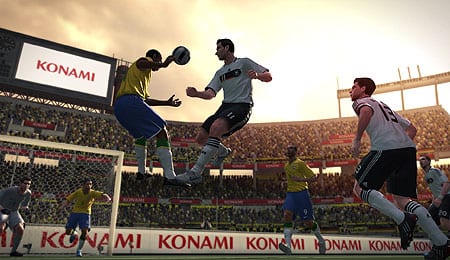 Michael Ballack takes a moment to admire a mid-air challenge during a Brazil/Germany match.

While the NFL and Major League Baseball may reign supreme in the United States, much of the rest of the planet eats, sleeps and breathes soccer. With the World Cup in South Africa just a matter of months away, I thought I’d test drive Konami’s latest footy title, Pro Evolution Soccer 2010. Known for years as Winning Eleven, this series has long been lauded for its strong gameplay and realistic approach to recreating the action on the pitch. With more licensed teams and improved graphics, Pro Evolution Soccer 2010 looks to be hitting its stride on the current generation of systems.

There’s no question PES 2010 puts a ton of different moves at your disposal, but being able to easily execute them is another matter entirely. Much like the NBA 2k series, players will discover the basics are readily accessible and easy to grasp while more advanced techniques remain best suited for hardcore gamers and series veterans. To that end you’ll find four full pages of controls listed in the instruction manual in a font size usually reserved for the fine print of a coupon.

As noted, however, the fundamentals will take you a long way and can be learned quickly. You move with the left stick (now in a full 360 degrees) and can employ three separate types of passes: short (A), long/cross (B) and through (Y). Moving the right stick also allows you to pass in a specific direction manually rather than to a teammate. Shooting is handled with the X button, which when held down fills up a meter — the fuller it is the harder you shoot, though you sacrifice accuracy. Finding the proper balance between getting enough on the shot to get it past the keeper and not so much that you send it six rows deep ranks as one of the game’s constant challenges.

Defensively, things are even simpler as you apply pressure on the ball by holding down A or go for a sliding tackle with B. If you’re off ball you can tell the computer to challenge the dribbler by simply holding down X. You can also dash with the right bumper and switch players with the left. In Become a Legend mode, holding down the left bumper will put the CPU in charge of your player for those that aren’t sure where to position themselves on the pitch.

Things can feel a little overwhelming early on, and even after dozens of games I still don’t feel like I’m competent enough with the controls to do everything I’d like to. So while nothing feels unresponsive, beginners should still expect a fairly steep learning curve beyond the basics.

From a pure graphical standpoint, PES 2010 can look absolutely beautiful. The stadiums give a great sense of scale, making the players appear like virtual ants in such a grand setting. The visuals hold up nicely during replays and close-ups of the players as well, displaying plenty of detail. Uniforms are colourful and the pitch itself looks simultaneously well manicured and heavily used. However, the real star of the presentation is the lighting. Depending on what time of day a match is played you can be treated to some nearly photo realistic effects in that area.

While the player models look good, there are things associated with their movement that is decidedly off. Dribbling and sprinting seem to be the two most obvious examples as whatever motion capture is being used just doesn’t quite click. It’s more apparent during the replays when the camera zooms in with things not looking as smooth and lifelike as they should.

The audio is generally strong, particularly with the sounds of the crowd in the stadium. They react appropriately to where you’re playing and what’s happening in the game. One of my favourite moments came when my created player was removed after scoring a goal to put his team up 3-0 on the road and was booed lustily when he left the game. However, my feelings remain mixed on the commentary by Jon Champion and Mark Lawrenson. Champion does most of the heavy lifting with Lawrenson chiming in following stoppages, and while his voice and tone match the action he can get repetitive in a hurry. A respectable soundtrack rounds out the audio package.

Like so many other current sports titles, Pro Evolution Soccer 2010 is built around two primary single-player modes: Master League (your basic franchise mode) and Become a Legend (create a player from scratch and play as only him for a full career).

I’ve become attached to taking control of a single player and guiding them through their career ever since NHL ’09, and PES 2010 starts you off as a 17-year-old looking to sign with a club. You pick a league you want to compete in and then play in what’s essentially a tryout match. After the match is over you’ll be given offers to sign with clubs. From there the mode quickly becomes a grind.

I signed a contract in the English Premier League with the fictional West Midlands Village (Aston Villa) and was relegated to intra-squad matches. I worked my way up to the bench and eventually the starting lineup, but outside of an end of game rating and defensive grade there was zero feedback on what areas I was strong in or where I needed to improve. Even though the coach grading in EA’s NHL series and feedback system in NBA 2k10 aren’t always fair, at least you’ve got sense of why you’re being criticized or praised. Here you just kind of move from one match to the next and do your thing.

Become a Legend is by no means devoid of fun, especially considering the majority of the time is spent playing in-game soccer, which is PES 2010’s strongest selling point. Plus, you can switch teams and/or leagues, compete in other countries, play for national clubs and more as your career advances. Still, I feel like a little added depth would’ve gone a long way to creating a mode which would be easier to become immersed within.

Soccer aficionados should embrace the Master League, which puts you in control of any team you choose. I took the easy way out and chose to lead the star-studded Manchester United club, which is one of only two fully licensed teams in the English Premier League and features easily recognizable names that even casual fans will know, such as Wayne Rooney, Edwin van der Sar and Michael Owen. The amount of info at your disposal can be a bit overwhelming for those that aren’t well versed in soccer, especially given the mix of real/fake players combined with the sheer number of leagues and players in the game.

As Man U I operated with a massive budget and wealthy sponsors, but the rules showed the possibility of going bankrupt for less well funded clubs, which would restrict your ability to sign talent. Keeping an eye on the bottom line really adds some depth as you’re constantly drawing revenue from sponsorships, ticket sales and merchandising. You’ll also have access to training and strategy for your team along with the ability to summon players from your youth club, loan/borrow talent on the transfer market, sign coaches, trainers and much more.

Pro Evolution Soccer 2010 does a really strong job of making the schedule feel full with standard league games, national tournaments and the fully licensed (and ultra slick looking) UEFA Champions League. Your players need to be given games off, which leads to frequent shuffling of the lineups and even then many of them will depart to play for their home country only to return fatigued. There’s always plenty going on and it really does make you feel like you’re overseeing a lot of things.

The actual in-game action on the pitch moves along briskly, and you’ll need to do a nice job moving the ball and executing your set pieces if you want to score goals on the higher difficulty settings. The goaltender A.I. can be a little hit or miss as I’ve seen times where a goalie will just watch a ball go right past him without even reacting. Overall, however, the players move to cut you off and free runs at the netminder are few and far between. That difficultly level makes scoring goals eminently satisfying while also making those balls that bound off the crossbar all the more agonizing.

A handful of forays into the online realm of PES 2010 were surprisingly solid given some of the problems I’ve encountered in other games when playing against the good people that don’t reside in North America. The lobbies are easy to navigate and the community is large enough that you shouldn’t have trouble finding a match. Also worth mentioning is a robust editing system that allows you to edit names, uniforms and just about anything else you can think of. This allows dedicated fans to get around the lack of full licensing.

Even with some underdeveloped modes and unlicensed players/teams, Pro Evolution Soccer 2010 comes through where it matters most, on the pitch itself. The game is fast paced without having an arcade feel and is quite simply a lot of fun to play.

By Herija Green
Tags: Pro Evolution Soccer 2010
This entry was posted on Tuesday, December 15th, 2009 at 6:47 pm and is filed under Herija Green, Video Game Reviews. You can follow any responses to this entry through the RSS 2.0 feed. Both comments and pings are currently closed.