Carlos Zambrano: Too Much Mileage? 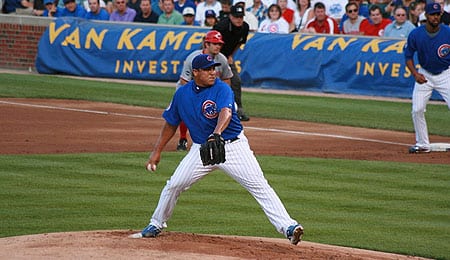 He’s only 28, but Carlos Zambrano’s best days are likely behind him.

It’s a question that’s been asked many times in recent years and one that deserves closer examination: how much has Cubs ace Carlos Zambrano’s heavy workload affected him?

In 2007, despite difficult negotiations, the Cubs were able to sign him to a five-year extension worth $91.5 million – a deal that made Zambrano one of the game’s highest paid pitchers. In fact, currently Johan Santana is the only pitcher that makes more than the fiery Cub righty.

Zambrano’s track record dictated that the Cubs make this move; he’s one of just three pitchers (the others are Santana and John Lackey) who has tossed at least 162 innings with a sub-4.00 ERA in each of the last five seasons.

However, this heavy financial commitment to Zambrano has hamstrung the Cubs to an extent. For instance, they sat and watched as three of the best pitchers in the game changed hands this week in Lackey, Roy Halladay and Cliff Lee, but Big Z’s big salary – which bumps up to $17.875 million in 2010 – took them out of the running for any of these aces.

Sure, the Cubs have loads of potential arms with Ted Lilly, Zambrano, Ryan Dempster, Randy Wells, Sean Marshall, Jeff Samardzija, Tom Gorzelanny and Rule 5 pick Mike Parisi all competing for rotation spots in 2010. But another ace to pair with homegrown talent Zambrano would have gone a long way towards helping the Cubs finally get over their extended World Series drought.

But a bigger concern for the Cubs is whether they made the right move, investing as heavily as they did in the portly Zambrano.

His hit rates have risen three straight years, and that’s a big worry. On the plus side, while he continues to give up more baserunners, Zambrano has limited the damage by cutting his home run rate in back-to-back seasons. His command – never what anyone would call sharp – has also gotten a bit better the past couple of seasons. Zambrano has also done very well in limiting the running game.

Most shockingly, Zambrano failed to reach double digits in wins in 2009 for the first time since he’s become a full-time starter. Part of that was because of time he missed due to injury – another growing worry – and part of that was because the Cub offense wasn’t as crazy potent as we all expected (although there was certainly nothing wrong with the run support he received).

One anomaly this year was his poor work at home. Zambrano was awful at Wrigley, but superb on the road. That’s likely nothing more than a fluke, however.

Zambrano did a great job against righties (.235 BAA, 680 OPS), but lefties are starting to get to him more.

What worries me greatly is his consistency – or lack thereof. April was a rough month for the big man, but he went on a sweet roll from May through July. And then came August – a month during which he was rocked – before he finished strong in September.

But there are two troubling career trends emerging for Zambrano that I expect to continue. One is his decreasing number of innings as the injuries mount; the second is the rising hit rates, which will ultimately start affecting his ERA.

Going forward, you can expect Zambrano’s health to be a big worry and his ERA to start cracking the 4.00 barrier. His run of double-digit win seasons is over; next up, the run of sub-4.00 ERA seasons will end, probably as soon as 2010.

By RotoRob
This entry was posted on Thursday, December 17th, 2009 at 4:02 pm and is filed under BASEBALL, RotoRob. You can follow any responses to this entry through the RSS 2.0 feed. You can skip to the end and leave a response. Pinging is currently not allowed.