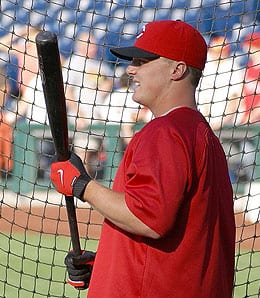 This could be your last chance to buy low on Jay Bruce.

Last week, we identified a young American League outfielder we expect to have serious sleeper potential in 2010 – Nolan Reimold. Today, we’ll look at an even younger flyhawk over in the National League who is poised for a major breakout – Jay Bruce.

This former top prospect got off to a fine start this season, but as he was prone to long slumps, things went progressively downhill from there until a broken wrist in July wound up costing Bruce a large chunk of the season. Despite being limited to around two-thirds worth of a season of at bats and suffering through an awful batting average, there were plenty of reasons to get excited about what Bruce might be capable of doing in 2010.

For starters, he made nice progress in the power department; in fact, he could have potentially made a run at 40 dingers had he not gotten hurt.

Secondly, Bruce’s strikeout rate – a major concern for much of his brief time as a big leaguer – was significantly better. Also, the left-handed hitter upped his numbers against southpaws, although Bruce still has plenty of room for improvement in this department.

Finally, he came back after his injury and hit .353 with a .765 slugging percentage in September, albeit in a very small sample size. But still, it was a great sign that Bruce showed no rust upon his return.

So while it’s easy to look at his poor BA in 2009 and be disappointed, Bruce was definitely making progress – development I expect him to intensify in 2010.

He’ll need to step up his play on the road (635 OPS vs. 914 at home), and I’d definitely like to see Bruce do a better job of producing with runners in scoring position and two outs, but he’s displayed enough flashes of excellence that we can remain optimistic despite these issues.

He’s obviously established himself as a core member of a rebuilding Reds team, and Bruce’s injury in 2009 left this team with precious little pop in the outfield https://rotorob.com/2009/07/12/the-wire-troll-the-return-of-mr-mota/, but assuming he can stay healthy, this kid (who won’t be 23 until a couple of days before Opening Day) is ready to become a legitimate Fantasy force. Hitting in the middle of the Cincy order, he’s probably a 10th round talent, but as the hype machine grows, as it’s sure to do with Bruce likely making plenty of sleeper lists, you can expect him to go much earlier than that in most drafts.

By RotoRob
This entry was posted on Tuesday, December 15th, 2009 at 1:00 am and is filed under BASEBALL, RotoRob, Sleepers. You can follow any responses to this entry through the RSS 2.0 feed. Responses are currently closed, but you can trackback from your own site.