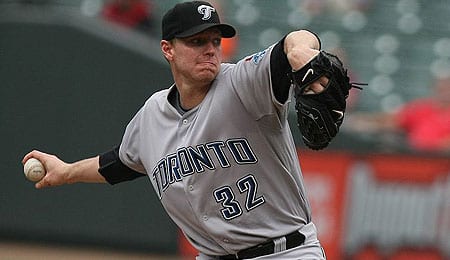 How much longer will Roy Halladay be a Blue Jay?

Remember when the Toronto Blue Jays were sitting in first place in the AL East, three and a half games ahead of the Boston Red Sox thanks to a 27-14 start? It was the middle of May and with the AL’s best overall record, this team was starting to believe in itself. Locals were crowing, but I pegged the run as unsustainable back in April.

Well, the Jays then went out on a nine-game road trip and, after a soft early-season schedule, began to face the cream de la cream of the Junior Circuit. The result was a nine-game losing skid that essentially shredded the team’s hopes of a miracle season.

Despite a much-improved offense, the team went 48-73 the rest of the way to wind up with a disappointing 75 wins and fourth place finish in the AL East.

And the issue that dogged the club for much of the summer – incessant rumours of Roy Halladay being dealt away – are still present this offseason. With Halladay saying he won’t approve any deal that occurs once the season starts, the Jays are under major pressure to make something happen so they can get on with the rest of their off-season plan.

Crappy? Sure is, Toronto fans. In case you had visions of competing dancing in your head, may I officially welcome you to reality.

By RotoRob
This entry was posted on Sunday, December 13th, 2009 at 4:20 pm and is filed under BASEBALL, RotoRob. You can follow any responses to this entry through the RSS 2.0 feed. You can skip to the end and leave a response. Pinging is currently not allowed.