Are the Jays for Real? 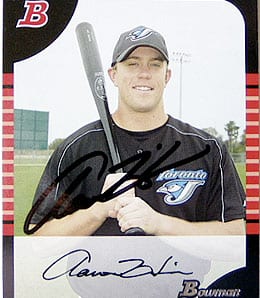 Aaron Hill’s remarkable comeback from concussion issues has sparked the Jays to a quick start.

Okay, the first month of the baseball season is almost in the books, so I thought it high time to pipe up on an issue I have yet to discuss.

As a Toronto boy, I’ve had to deal with the city being abuzz over the Jays’ fast start. Alright, they got smoked Wednesday bad, so now have to share the AL East lead with the blazing BoSox (with the Yankees closing fast and now just three games back), but the fact is, the Blue Jays have been absolutely crushing the ball. Toronto leads the majors in hitting, paced by Aaron Hill, who is enjoying a tremendous comeback and swinging a .376 stick. We recommended him way back in Week One, but can you believe this dude is still unowned in some leagues? Well, he won’t be for long at this pace. Hill looked like he was slowing down a bit earlier this week, but is now 5-for-8 with two runs and two ribbies in the past two games. He spent most of 2008 batting second in the lineup, but was actually more successful batting seventh. This year, he’s hit exclusively in the two-hole, and has provided the Toronto attack with a spark near the top of the order that was desperately missing last season. Assuming he remains there all season and stays healthy, Hill will shatter his previous career high in at bats, and likely in most other categories as well.

While the Jays had a middling running game last season, this year, it’s downright brutal, and that would concern me if I was a fan of this team. Given the unsustainable attack they’ve shown so far, the fact that they may have difficulty manufacturing runs once they cool off does not bode well for this team continuing to compete in the AL East for long. Vernon Wells isn’t hitting quite as well as he did during his injury-shortened 2008 campaign, but he’s already just one steal away from matching his total from last season. He’s accounted for a third of the team’s nine steals. However, Alex Rios’ huge base stealing season last year is looking like the outlier, as he’s on pace to return to his career norm of mid-teen swipes.

Production out of the lead-off spot has been a key reason the Jays have turned around one of baseball’s worse attacks to become the highest scoring team in the game. Marco Scutaro? Sure, he had a pretty good season with the Jays last year, but this is ridiculous. He’s getting on base at an unsustainable .422 clip (almost 100 points over his career mark) and that’s translating into a crapload of runs. Scutaro has crossed the plate five times in the past three games, giving him an even 23 runs in 23 games this season. Jeez, we’re not even a month into the season and this dude is already almost a third of the way to matching the career high 76 runs he scored last season? Scutaro has been an early-season waiver wire gem batting atop this scorching lineup. Sell high candidate? Uh, ya…I’d say so.

How about Adam Lind? He’s gone 0-for-8 in the past two games, yet is still on pace for nearly 200 hits as he enjoys a breakout year. I’m loving how Lind’s extra-base pop continues to develop as he nears his prime power years.

Hell, even veteran catcher Rod Barajas – who had such trouble getting on base in his first season in Toronto – is on pace for a career year. He’s recorded four multi-hit games in the past five tries, hitting one double in each of those tilts. Barajas is getting the lion’s share of the work behind the plate, and he’s been productive enough to be gaining some traction on the waiver wire. I’m surprised he hasn’t been a more popular pick up, considering all the problems owners are having with catchers so far this season.

Even when their offense sucked last year, the Jays were a good contact team. This year has been more of the same, as they are not striking out much – remarkable considering this team has way more at bats than any other major league team. Rookie Travis Snider struck out far too often in his first taste of the Show last year, and while he’s still fanning too much, the youngster has shown improvement in this area (last year, he was whiffing roughly twice every seven plate appearances; this year, it’s down to less than twice every nine PAs).

Anyways, it’s a damn good thing the Jays are hitting the cover off the ball. While their pitching has still been strong, not surprisingly, they have been unable to duplicate last year’s showing when they led the majors in team ERA (3.49). That figure is up almost a half-run per game, and with more outings like Wednesday, when all 11 runs that KC scored were earned, that figure will soon soar over the 4.00 mark and fail to be a team strength.

David Purcey showed some promise last season, and he looked like a pitcher that could at least eat up some innings on a young Toronto staff this year. But he’s been roughed up in three of his last four starts, and has now surrendered 20 earned runs in 25 2/3 IP for an ERA north of seven. If Purcey takes the hill as many times as the Jays were hoping he would, this team will not be able to survive his ineptitude. I would assume that despite injuries to Shaun Marcum and Ricky Romero, Purcey’s rotation spot is in jeopardy.

The Toronto pitching staff is suffering from more control problems in 2009, something that wasn’t a factor last year. Purcey has been awful in this regard. Brian Tallet improved his control last year, but with six walks issued over his last two starts covering 9 2/3 IP, he’s now walking almost one batter every two innings. He pitched around it his last start, but on Wednesday, he was absolutely bitch-slapped by the Royals. If he has a couple more outings like that, Tallet will find himself back in the bullpen.

In 2008, the Jays did a fantastic job of limiting the long ball. So far this year, they haven’t been quite as stingy, but I wouldn’t call it a serious problem. Tallet’s been the worst offender here, but the big surprise is that Roy Halladay has been getting touched up more often that usual. In fact, he’s on pace to surrender a career-high 29 home runs and that’s sent his ERA up almost a run over last season, despite peripherals that are more or less similar, and in some cases much better than they were in 2008. Doc will be fine, as long as he limits those long balls to mostly solo blasts. So far, two of the four dingers Halladay has served up have been of the dreaded multi-run variety.

By RotoRob
This entry was posted on Thursday, April 30th, 2009 at 9:19 am and is filed under BASEBALL, RotoRob, Team report. You can follow any responses to this entry through the RSS 2.0 feed. You can skip to the end and leave a response. Pinging is currently not allowed.