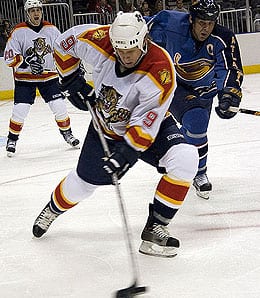 Can Stephen Weiss keep up this pace?

This week our Fantasy Hockey Roundtable was asked “Which players are you currently looking to sell while their hot?”

Your humble correspondent threw Stephen Weiss under the bus:

The hot player I’m considering dumping is Stephen Weiss from the Florida Panthers. He’s coming off a December 2 hat trick and has five goals in his last five games. He’s got 13 goals and 11 assists in his first 31 games. Weiss is having a career season. Amazingly, he’s never scored more than 20 goals in a season and he’s never had more than 48 points. One school of thought says Weiss will continue to sizzle, but I’m guessing, as the Panthers continue to struggle, his production will return to his usual low-to-average levels. There’s nothing in his history to suggest he’s about to evolve into an offensive superstar. Weiss is doing well right now, and some Fantasy owners are probably cashing in on his recent hot streak, but I’m betting this is all just an illusion.

Read the rest of the Roundtable here.

By Steven Ovadia
Tags: Fantasy Hockey
This entry was posted on Sunday, December 13th, 2009 at 9:09 pm and is filed under HOCKEY, Roundtable, Steven Ovadia. You can follow any responses to this entry through the RSS 2.0 feed. Both comments and pings are currently closed.