Setting up in San Francisco 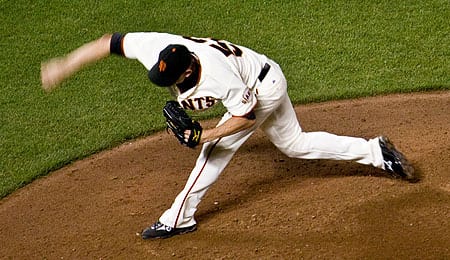 The Giants picked up Brandon Medders from the scrap heap and he rewarded them with a fine 2009.

Brian Wilson enjoyed a fine season at the back end of the San Francisco Giant bullpen, and he’ll be earning a nice raise for his efforts when he returns to save games for 2010.

But what about his back-up crew? How did the men who set Wilson up fare in 2009?

Let’s take a quick look at three arms that tried to help the Giants bridge the gap between their starters and closer this season.

Along with Arizona, I had pretty much given up on Brandon Medders by early 2008. Well, the minor league deal he signed with the Giants last winter proved to be a serious bargain as Medders enjoyed a major revitalization in San Francisco.

Pitching in a career-high 61 games, he did issue more walks than ever, but also enjoyed a personal high in strikeouts, matched his personal best with five wins and even chalked up the first save of his career. After it looked like he couldn’t throw the ball by anyone in Zona, Medders’ K/9 bounced back in a big way this season.

The righty was strong against both righties and lefties, and although there’s probably little upside here – he’ll be 30 next month – the Giants have opted to tender Medders a contract for 2010. Considering how well he did away from AT&T Park, it would have been interesting to see Medders land elsewhere. I still expect him to be somewhat useful in a very deep NL-only league.

Early in the 2008 offseason, the Giants signed lefty Jeremy Affeldt, and this also turned out to be a brilliant move. While Affeldt’s K/9 dipped after peaking in 2008, the rest of his game was absolutely flawless as he was perhaps the best set-up man in the game – at least in terms of holds, as he shared the major league lead in that department. And as more and more Fantasy leagues include this stat, hurlers like Affeldt suddenly are quite valuable.

In fact, Affeldt was so untouchable early on that by mid-season he earned the rare Wire Troll recommendation as a set-up man. Not surprisingly, he was tough on lefties, but he was even nastier against righties, and Affeldt was yet another Giant reliever who was better away from home (1.26 ERA), not that he was chopped liver at AT&T (2.36).

Affeldt will also enter 2010 at the age of 30, and while it’s nearly impossible to imagine him topping 2009, given his recent history, it’s far more likely he will be able to duplicate his numbers as opposed to Medders, who seems like more of a crapshoot.

And then there’s Merkin Valdez. Like Affeldt, he was deemed valuable enough to earn a spot on our 2009 Relief Pitcher Cheat Sheet, ranking 80th. But unlike Affeldt, Valdez managed to pitch his way off the list with a substandard 2009.

He was more susceptible to the long ball and somehow this righty held lefties to a .250 BAA mark yet allowed righties to bitch slap him to the tune of a .324 mark. A 6.64 second half does not bode well for Valdez’s future and suddenly he seems closer to joining the ghosts of Kurt Ainsworth and Jesse Foppert among failed Giant ‘can’t miss’ pitching prospects than reaching the promise of a Tim Lincecum or Matt Cain. And remember that in 2004, it was Valdez who was the Giants’ top prospect.

Yet, it still seems early to completely throw in the towel on Valdez – even though he’s been around for seemingly ever, he just turned 28 last month.

It’s definitely safe to say that 2010 will be a bubble year for Valdez as we find out if he truly does have any long-term potential or whether we can give his career a dirt nap. I suspect we should have shovels ready.

By RotoRob
This entry was posted on Wednesday, December 9th, 2009 at 10:50 am and is filed under BASEBALL, RotoRob. You can follow any responses to this entry through the RSS 2.0 feed. You can skip to the end and leave a response. Pinging is currently not allowed.