Random Notes for the First Snowfall of the Season 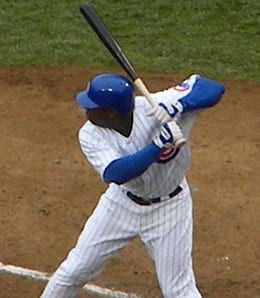 Could Milton Bradley wind up in Colorado?

Did anyone else notice that the San Diego Padres went 37-25 from July 28 on? That’s a pace that would have won them the NL West. And if they manage to hang onto Adrian Gonzalez – an underrated star with both the bat and the glove – this team has a chance to thrust itself into the NL Wild Card race in 2010. I’m picking San Diego to be next year’s Texas Rangers.

Still in the NL West, how about that run the Colorado Rockies went on to not only win the NL Wild Card but almost catch the Los Angeles Dodgers for the division title? This team was 20-32 on June 3, but went 72-38 from that point on. Holy hot streak, Batman. Meanwhile, could the Rox enter the Milton Bradley trade front? There’s a rumour that it’s possible, and assuming he bounces back, Bradley would definitely add some teeth to an offense that slipped to seventh in the NL in team batting this season.

The Yankees gave up a lot to get him, but in Curtis Granderson they may have a man who can lead the next generation of Pinstripe glory for a decade. While his overall numbers slipped again this year, Granderson did stay healthy and posted his first 30-homer season. And moving away from Comerica could be huge for him; he recorded an OPS of 861 on the road compared to just 695 at home. I’m expecting a major bounce back from Granderson in 2010.

By RotoRob
This entry was posted on Thursday, December 10th, 2009 at 2:37 pm and is filed under BASEBALL, RotoRob. You can follow any responses to this entry through the RSS 2.0 feed. You can skip to the end and leave a response. Pinging is currently not allowed.