The Wire Troll: Me and Julio Down by the Ball Park 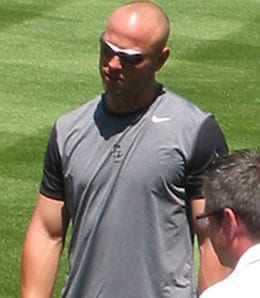 Now that Matt Holliday is with the Cards, it’s time to spend those FAAB bucks.

Tony La Russa got the bat he was looking for last week when the Cardinals acquired soon-to-be free agent Matt Holliday from the Athletics. This acquisition has created a set of circumstances that Fantasy players in single league formats both love and hate. The FAAB that you have been sitting on in hopes of seeing a star player change leagues has now occurred and you can be guaranteed the dollars will be flowing this weekend in NL-only leagues throughout the land. That being said, my condolences go out to those playing in AL-only leagues. Brett Wallace has the potential to be a solid player down the road, but isn’t going to be a difference maker in 2009.

There are certainly going to be more players moving, but it is hard to imagine — other than possibly Roy “Doc” Halladay heading to the National League — a situation more warranting of going all-in with the FAAB dollars than Holliday. The Cardinals also acquired Julio Lugo this past week and, although not nearly Holliday-quality, he is still worthy of attention if you do happen to lose out in the Holliday sweepstakes. Middle infielders with his stolen base potential are always valued.

It is undoubtedly going to be an interesting week heading into the July 31 trading deadline. Now on to some waiver wire picks for the upcoming week.

Julio Lugo, SS, St. Louis Cardinals: The Red Sox finally found a home for the $36-million man in the Cardinals, who are loading up for a stretch run in the NL Central. In two starts for the Cardinals since the trade, Lugo is six-for-10 with one homer, two RBI, three runs scored and a stolen base. The change of scenery has done him some good, at least initially. The potential for a solid stretch run from the fleet-of-foot Lugo makes him a great acquisition in all formats.

Scott Hairston, OF, Oakland Athletics: The former Padre was acquired by the Athletics on July 5. The A’s are in full blown sell mode heading into the trade deadline and this should create plenty of opportunities for Hairston. The power potential is there as demonstrated in 2008 when he hit 17 long balls in 326 at bats for the Padres. In deeper formats and AL-only leagues that pop could be a huge bonus for your Fantasy squad over the balance of the 2009 campaign.

Seth Smith, OF, Colorado Rockies: Now here’s a guy that is definitely flying under the radar. Smith has quietly managed to slug eight homers, with 28 RBI, 35 runs scored, and three thefts with a .291 BA in only 179 at bats for the Rockies. The outfield in Colorado is a bit crowded, but it appears that Smith has earned his playing time opportunities and should be rostered in all deeper formats and NL-only leagues.

Gio Gonzalez, SP, Oakland Athletics: Last week, the 23-year-old southpaw clearly demonstrated the many reasons that young pitching is a huge risk. Monday, at home against the Twins, he was hammered to the tune of 11 earned runs in 2 2/3 IP. He then proceeds to march into home run heaven Saturday in New York and promptly shuts down the vaunted Yankee offense to the tune of two hits, one earned run and six strikeouts over 6 2/3 IP. He is definitely not for the feint of heart, but the potential is such that he should be rostered in all keeper formats and AL-only leagues. After all, for the long-haul, wouldn’t you rather drive a Gio?

Kyle Drabek, SP, Philadelphia Phillies: The 21-year-old has bounced back exceptionally strong from the Tommy John surgery that cost him most of the 2008 season. Drabek is currently at the centre of trade discussions with the Blue Jays and their ace Halladay, and for very good reasons. His combined numbers this year in the minors in 122 1/3 IP are 10 wins and a 2.80 ERA. He’s allowed only 104 hits and 38 walks while managing to accumulate almost a strikeout per inning, with 118 on the year. The son of former Cy Young winner Doug Drabek is looking at a bright future and should be rostered in all keeper formats and on the radar in mixed leagues. In the event that he is traded to the Blue Jays or for that matter almost any other club, Drabek has the potential to step right into the starting rotation for the balance of the 2009 campaign.

Miguel Montero, C, Arizona Diamondbacks: The injury to Chris Snyder opened the door and Montero has stepped through it in a huge way. In his past 10 games, the 26-year-old is hitting .390, with five long balls and 13 RBI. It appears that he has staked a solid claim to the position and will get the majority of at bats down the stretch even when Snyder returns. If Montero is still available in your league, don’t hesitate to make a move and get him rostered quick.

Kevin Hart, SP/RP, Chicago Cubs: The news over at Wrigley just keeps getting better. Ted Lilly has hit the DL with both shoulder and left knee inflammation and is scheduled to have his knee scoped this coming week. Hart has been promoted from the bullpen, and in two starts he has managed wins over both Washington and Cincinnati. He won Saturday against the Reds by pitching six very solid innings, allowing only five hits with one free pass while striking out four. Since his recall from Triple-A Iowa June 21, Hart has been effective working out of the pen, but has allowed 16 walks with only nine strikeouts. Normally I’d be concerned with these stats, but Hart had 63 punchouts in 57 2/3 IP in 2008, and this year at Triple-A Iowa managed 57 strikeouts in 52 1/3 IP. Those early stats appear to be an aberration and I wouldn’t be overly concerned. Hart makes for a solid addition in NL-only and H2H formats and should be on the radar in standard mixed leagues.

Carlos Guillen, 1B/3B/OF, Detroit Tigers: Guillen has been on the DL and out of action since May 4 with shoulder inflammation. He was activated last week and in two games since his return he has five hits in 12 at bats including a home run Friday night against the White Sox. The health issues are too numerous to mention, but the offensive potential is such that at this stage of the season he is more than worthy of a claim in all formats. Guillen has the potential to be a solid offensive spark for both the Tigers and your Fantasy squad down the stretch.

Pedro Feliz, 3B, Philadelphia Phillies: The power is way down this season with only six homers, but with 51 RBI he is on pace to have one of his best seasons, surpassed only by that 2006 season with the Giants when he drove in 98. What has been impressive this year is that Feliz has obviously made some adjustments in his swing and is batting .295 on the year (and .333 in the past 10 games). The improved batting average and RBI potential at the corner makes Feliz a solid addition in all formats.

Jeremy Affeldt, RP, San Francisco Giants: Affeldt has been quietly going about his business for the Giants and has now put together an incredible run of no earned runs in 28 appearances dating back to May 7. He is currently second in the majors in holds with 21, behind only Carlos Marmol of the Cubs who has 23. For leagues using holds, Affledt should have been rostered a long time ago, but in the event he’s snuck in under the radar he should be added immediately. Brian Wilson is entrenched as closer for the Giants, so the save opportunities aren’t there, but in the event of injury Affeldt would be next in line.

Adrian Beltre, 3B, Seattle Mariners: The 2009 campaign has been a huge disappointment for both Beltre and his Fantasy owners. He not only struggled early, but then hit the DL with shoulder woes at the end of June. The soon-to-be free agent is scheduled to commence hitting off a tee this coming week and appears to be on schedule for an early return from the DL. Beltre could possibly be back in the Mariner lineup as early as mid-August. For those playing in leagues where he was dropped it is time to find a spot on either your team’s bench or DL in anticipation of his return. He has a lot to prove in a relatively short period of time as he heads towards free agency this offseason.

By Tim McLeod
This entry was posted on Sunday, July 26th, 2009 at 12:21 pm and is filed under BASEBALL, The Wire Troll, Tim McLeod. You can follow any responses to this entry through the RSS 2.0 feed. You can skip to the end and leave a response. Pinging is currently not allowed.