The Wire Troll: Many Happy Returns 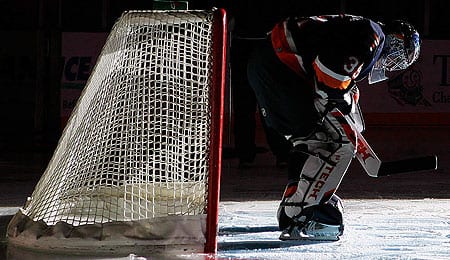 Rick DiPietro will return soon, but may not be Fantasy-worthy for weeks.

With just a little over two weeks until Christmas, we figured it would be time to announce some returns that may be on your Fantasy waiver wire. Some are going to generate a considerable amount of controversy while others will just be good to have back. Imagine the Fantasy owner who has seven or eight guys on the IR and their joy to see one or even two guys coming back. The thrill of being able to get a full roster to go to war for you even for a night or two can be a bastion in a very long Fantasy season.

Time to get the circus warmed up because this first potential return may cause a real dizzying experience for Fantasy owners. This one almost gets the entire column this week just for the repercussions.

Rick DiPietro, G, New York Islanders: Yes indeed, the circus is about to come back to town. The oft-injured goalie who may be easy on the eyes, but not easy on your roster is rehabbing with the Bridgeport Sound Tigers (AHL). Now, what will this ultimately mean for Dwayne Rolosson and Martin Biron? For one, it will mean a lot of sleepless nights for Rolo and probably a new address for Biron. Do not feel too sorry for Biron as, honestly, he is just not getting the goal support from the Islanders. His record is 2-8-2 with a 3.04 GAA and .907 save percentage in just 12 starts. Keep in mind that DiPietro is on a two-week conditioning assignment and more than likely will be brought up before the Christmas roster freeze.

However, from the looks of DiPietro’s first start, he has a long way to go in the conditioning department. At least the reflexes appear to be there. DiPietro played 40 minutes in a 7-3 win over the Springfield Falcons and gave up three goals on 13 shots (all the goals came in the second period). Look, I know they say December 15 is the target return date for DiPietro, but if you are looking at him as a viable Fantasy option, you may just want to wait several more weeks or stash him on your IR until he can play consistently. Because, after all, the circus will be in town and who knows when the music will ultimately stop. The prognosis says he may become viable before the Olympic break.

Andrei Markov, D, Montreal Canadiens: Hey, he is already skating by himself. That is good news. Remember that it was feared that Markov would be out until at least the Olympic break in February. Those leg lacerations can be really nasty and, honestly, just to see Markov on the ice has to bring a smile to those who drafted him first amongst defensemen like so many did (myself included). Think of getting .75 points per game and think back to all those power play points you remembered so well. Now, back to reality! Markov is about four weeks from returning, but the reason for the heads up is that he is actually available in quite a few leagues. Now would be the time to snatch him up before it’s too late. In early drills, his skating looked pretty fluid, by the way. The conditioning and consistency will come in time.

Ryan Smyth, LW, Los Angeles Kings: At first, it was suggested that Smyth might be back as soon as Monday, but you may want to hit the old “not so fast” button. Rumour around the Kings is that they may not bring Smyth back until after the Christmas roster freeze which would be about two weeks after the original return date of December 14. Look at what his absence has done to a guy like Anze Kopitar (three points, -3 in eight games). Oh, and Kopitar has zero goals in that span (after potting 14 while Smyth was active). Clearly, Smyth has an impact on this King team (at least with the first line). So the Smyth situation is something to keep an eye on if you own either Kopitar or Alexander Frolov.

Paul Martin, D, New Jersey Devils: If he’s healthy and his head is now on straight, Martin may be a guy to look at when he comes back in the near future. The fractured arm has pretty much healed and now it is a question of how long it will take Martin to get back into game shape. The pressure is on him as a guy like Andy Greene (potential All-Star?) has absolutely blossomed while Martin was gone. Martin had two points and only nine shots on goal in nine games before his injury. Needless to say in a contract year the time is now or…well you know the rest, Fantasy owners. That urgency may be enough to make Martin a worthwhile pick upon his return which is coming in the near future.

Stay tuned next week as we have our own waiver wire freeze of sorts. We will select a few players and tell you whether you should let them stay on the waiver wire or pick them up. It should be fun. Until then, enjoy the hockey action and good luck with your Fantasy teams.

By Chris Wassel
This entry was posted on Tuesday, December 8th, 2009 at 5:35 pm and is filed under Chris Wassel, HOCKEY, The Wire Troll. You can follow any responses to this entry through the RSS 2.0 feed. You can leave a response, or trackback from your own site.