Dear RotoRob: Should I Accept B.J.? 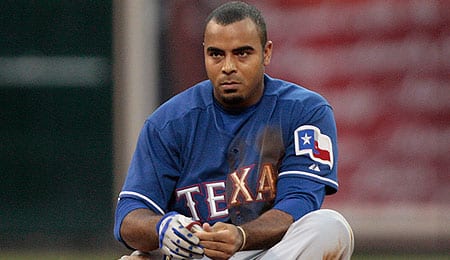 I was wondering what you thought about B.J. Upton and Nelson Cruz because they’re currently “on the table” in deals for Prince Fielder; one owner is offering me Upton and Brandon Phillips for Fielder and Howie Kendrick. That one is very tempting because it would address my two worst offensive positions, but I’m a bit unsure about the “potential vs. reality” on Upton, and for some reason I don’t “love” Phillips (and conversely think a lot of the yet-to-stick Kendrick).

Hence I’m not sure the return is quite right; I’m trying to get him to sweeten the pot a little bit more, but as you might imagine, he’s sticking pretty firm to the offer at present. Meanwhile, another owner seems willing to pony up Cruz and Javier Vazquez in return for Fielder and “a pick” — don’t know what the “pick” is, but I definitely wouldn’t pay more than a third round minor, and I’m not sure that I should have to give up a pick at all since I’m still surrendering the best player in the deal.

Let’s face it, Fielder’s about as good as they come at the position. So, any assessment of these players would be welcome, if something comes to mind. Am I nuts not to accept either of these offers?

How do I stack up in the steals category? Fairly badly. I have Hanley Ramirez, and almost nothing else; here is my current starting roster:

My offensive reserves are Kevin Kouzmanoff, Placido Polanco, Kelly Shoppach and Jeff Francoeur. Not much bench, I know…

Any insight you can offer would be much appreciated — thanks!

Without a doubt, Molina is a crawler. Even one-legged Hideki Matsui looks like a speedster in comparison. When looking at your roster, finding speed should be a priority. Miggy, Hanley and Zimmerman (who I really like moving forward) are a good power base so you can probably look at moving Prince. Power will be in a bit shorter supply this year based on a series of early mocks I’ve done, but a player with 40 SB potential and HR potential is few and far between.

As far as Upton goes, now is definitely the time to move. I’ve seen him live three times now in the Twinkie Dome and without a doubt he stands out from a crowd. He just oozes talent. I own him in my auction keeper league and have received several offers, but have no interest in moving him, at least not yet.

Prince is one of the top four or five homer guys available, but I personally am not a big fan of players that are as wide as they are tall. When his bat speed drops even a fraction, there is going to be trouble. I don’t know what your working relationship is with the guy you’re dealing with, but if you could find a way to get Upton and Phillips by moving Prince and maybe Polanco and a pick it would give you a very nice chip in either Phillips or Kendrick (assuming Howie finally starts playing up to that unlimited potential) that you could then look at flipping one of them to further address your needs or build in some depth.

I would do the Upton/Phillips deal as it stands, but would look at trying to shift from Kendrick to a lesser talent or draft picks emphasizing that the power he is getting is top-tier and very proven and will be in short supply, while all the risk in this deal is on your side of the fence. You will certainly find out very quickly how badly he covets Prince and at the same time leave the door open for you to backpeddle and toss the original deal back at him.

A combination of Phillips, Ramirez and Upton should be good for 80-to-90 thefts, so that’s a good start. Look to either Julio Borbon or Rajai Davis in your next draft if either is out there to further help you in the speed numbers.

As far as the second deal involving Cruz and Vazquez, I’d steer clear. Both are decent players, but for a player with Prince’s proven homer potential, this is simply not enough return, in my opinion.

By Tim McLeod
This entry was posted on Wednesday, December 2nd, 2009 at 11:26 am and is filed under BASEBALL, Dear RotoRob, Tim McLeod. You can follow any responses to this entry through the RSS 2.0 feed. You can skip to the end and leave a response. Pinging is currently not allowed.