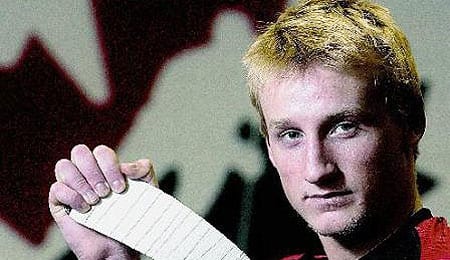 The Tampa Bay Lightning is finally getting some offense from someone besides Steven Stamkos.

It’s difficult to knock a guy for having 18 points in 19 games, but there have been plenty of people criticizing the play of Vincent Lecavalier. When you’re looked upon to pop in 50 goals each season, having just three at the quarter pole isn’t exactly going to justify a bazillion dollar contract. Still, Lecavalier’s Fantasy owners should take some solace in the fact that three of his last four goals came in the last two weeks (okay, that’s still a stretch). However, Tampa’s scoring is starting to spread around — it’s not just the Steven Stamkos show anymore. With more scoring depth coming through, that can only make things better for Lecavalier. Yes, you can put your first-round pick back in the lineup.

As for teammate Alex Tanguay, he was dead and buried not too long ago. Maybe he thought the season started in November because he’s a point-per-game so far this month. Hey, that’s kind of how he used to be all those years in Colorado, right? Since the Fantasy hockey world has pretty much forgotten Tanguay, he’s worth a gamble as he’s out of Rick Tocchet’s doghouse and back in top-six and power-play duty.

Let’s move even further south with a quick look at the Panthers. While Steven Reinprecht is leading Florida (3-2-1 in its last five) in scoring, he’s not the reason why the Panthers are putting up strong goal totals. Even with David Booth on the shelf, the Panthers are putting the puck in the net. The big catalyst for that? Check out old man Cory Stillman, who has 10 points in his last eight games. Oh, and he’s only got 13 points total — that’s a hot run.

Kristian Huselius missed about two weeks due to injury, but he’s come back strong. In three games since his return, he’s got three goals and three assists — and he’s pushed the Blue Jackets to wins in all of those games. Perhaps more importantly, Columbus tallied three or more goals in each of those, something the Jackets struggled mightily to do last year.

The Buffalo Sabres are one of the surprise stories early on this season, and Tim Connolly is a big reason why. The crafty centre has played all 18 games and is averaging close to a point-per-game. You may think that this means it’s safe to hold onto him for the long term, but the savvy thing to do is to move him while his value is at an all-time high. He’s the perfect support player for a major trade.

Sticking in Buffalo, maybe Thomas Vanek finally woke up. The $7-million man was beyond awful in October (just five points, or about $1.4 million per point) but has kicked things up in the past week, putting up five points in the past four games. Unfortunately, only one of those were goals, but any tally on the score sheet is better than none.

Speaking of hot weeks, it looks like ex-Sabre Maxim Afinogenov decided he was happy in Atlanta. Since last Friday’s tilt against Los Angeles, the man named after a men’s magazine has put up seven points in just three games. Toss in the game prior to the LA matchup, and Maxim’s riding a four-game goal streak.

Didn’t we tell you that Ryane Clowe was incredibly streaky? In October, Clowe put up four total points. So far in November, he’s had eight points in nine games. Not to get all mathematical on you, but Clowe’s had a history of performing like a sine wave — equal parts up and down. Look for him to hit one of his usual cold streaks soon, but you can move him while his value is up.

Looking to get points by osmosis? Phil Kessel’s had a successful start to his Maple Leaf career. Matt Stajan, he of the career-high 55 points last year, has been in on more than half of Kessel’s goals or assists. Gotta love it when a pure goal scorer elevates a career checker, huh?

No one’s really scoring much in Phoenix, but if you’re looking at riding a hot hand, streaky Radim Vrbata’s got four points in his past four games. That’s a lot for Phoenix’s standards. Vrbata’s one of the few Coyote forwards that offers some Fantasy value, but not in the way you might think. While the entire Phoenix team is struggling to put up goals, at least Vrbata’s trying as he’s in the top 20 in shots on goal.

For all those people who drafted Booth, you’re gonna have to wait a little longer as his concussion issues have forced him to stop exercising for the moment. Marc Savard is close to coming back to the lineup, and Atlanta sleeper pick Bryan Little returned this week. Who’s out? Brian Gionta, Ryan Smyth, Alex Goligoski, and Alexander Semin.

By Mike Chen
This entry was posted on Saturday, November 21st, 2009 at 12:48 am and is filed under HOCKEY, Ice Chips, Mike Chen. You can follow any responses to this entry through the RSS 2.0 feed. You can leave a response, or trackback from your own site.