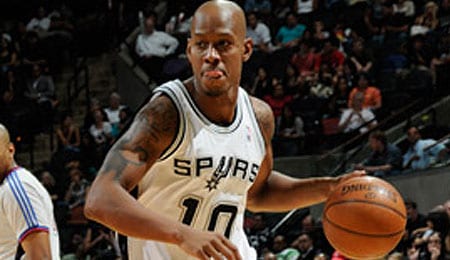 Have you seen what’s going on in San Antonio with the perennial contender Spurs? Thursday night the Spurs dropped their third straight game to slip to 4-6 – the first time they’ve had a losing record through 10 games since 1996. But stranger yet, it was Utah that walked into the AT&T Center and emerged victorious, the first win for the Jazz in San Antonio in a decade – snapping a run of 20 straight losses.

In the second game of a back-to-back, San Antonio was missing both Manu Ginobili, who started at shooting guard Wednesday, and Tony Parker, who’s been out four of the past five games because of his nagging ankle injury.

With Ginobili out of action for another week or so because of his groin, it was Keith Bogans getting the start at the two guard. Uh, ya. May I suggest you do not stop reading this and go pick him up? Don’t do it. Please. Bogans has shown flurries of minimal value over the years, most recently coming off the Buck bench last season, but even as a starter in San Antonio, he’s just not getting it done.

Bogans did manage a season-high seven boards and three assists while adding a block despite playing in foul trouble, but he wasn’t exactly lighting it up. He’s actually shooting very well this season (50 per cent from the field), but simply isn’t getting enough touches for anyone to care. Besides, as a career 39.5 per cent shooter, his numbers can only go down from here, and he’s never been a rebounder. The Spurs really struggled with their perimeter game on Thursday, sinking just 4-of-20 from downtown, and Bogans did manage to play a big part in that, missing all three of his attempts from beyond the arc. There….see? He did do something after all.

Meanwhile, George Hill has been starting for Parker, but he’s struggling with his shot, sinking just 13-of-32 the past two games. Richard Jefferson shot better on Thursday, sinking 6-of-12, but with just 16 points, he didn’t exactly pick up the slack. How about getting a little aggressive, RJ? Eight trips to the line in the past three games? No wonder he’s struggling to put up points since arriving in San Antonio. This isn’t what the Spurs paid for, is it?

Another big free agent acquisition that hasn’t exactly paid dividends yet is Antonio McDyess. He’s shot the ball well this year, but is getting so few touches that no one has noticed. For instance, he’s drained 10-of-15 over the past three games. Obviously, five shots a game isn’t going to offer any Fantasy value.

Off the bench, Roger Mason is finally getting a bit of burn the past two games, and he showed some life Thursday, sinking 2-of-5 from 3-point range. It’s about time, dude. The normally excellent source of 3-balls has been ice cold this season, sinking just 23.5 per cent from downtown.

I’m sure no one is panicking in San Antonio. This team spun its wheels at the start of last season, yet still wound up winning 54 games and finishing first in their division.

Still, it is kind of weird to look at the Western Conference standings and see the Spurs sitting in 10th place, looking up at…the Thunder?

By RotoRob
This entry was posted on Friday, November 20th, 2009 at 12:06 pm and is filed under BASKETBALL, NBA Today, RotoRob. You can follow any responses to this entry through the RSS 2.0 feed. You can leave a response, or trackback from your own site.