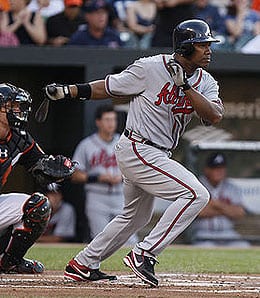 After bombing in Atlanta, could free agent Garret Anderson wind up with the Marlins?

With free agency beckoning, Garret Anderson didn’t do himself any favours with a substandard 2009 campaign. Then again, how much did we expect him to do? Other than a big July in which he looked like the Anderson of old, the veteran outfielder didn’t do much.

We already discussed his poor August performance, but compared to what he did in September, Anderson looked like a Silver Slugger in August. In the season’s final month he hit just .216 with a 571 OPS and only one homer, a showing that likely sealed his fate in Atlanta – if that wasn’t already decided anyways, with the Braves needing to clear up some space for uber rookie Jason Heyward.

After staying relatively healthy in 2008, Anderson missed time this year with a quad problem, and his extra-base pop has been waning for a couple of seasons now.

He’s 37 and, coming off a down year, will be a fairly cheap option for some team, although you’d think with his deteriorating range in the outfield, he’d be best served working as a DH back in the American League.

However, one NL club that might come calling is the Florida Marlins, who would love to shift ROY Chris Coughlan back to his natural position at second base. Anderson might be a good match there, providing a veteran presence to a young club without the usual high price that is associated with that kind of player.

From a Fantasy perspective, Anderson is at best an NL-only option, and even then, he’d likely be a fourth outfielder type for your team. At this point, that’s not likely to improve.

By RotoRob
Tags: Garret Anderson
This entry was posted on Thursday, November 19th, 2009 at 2:29 pm and is filed under BASEBALL, Free agents, RotoRob. You can follow any responses to this entry through the RSS 2.0 feed. Both comments and pings are currently closed.