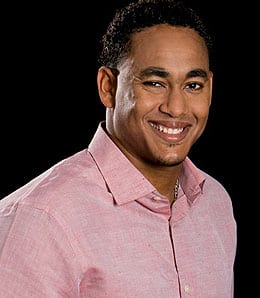 You may not agree with his shirt colour choices or his eyebrow grooming techniques, but there’s no arguing with Jair Jurrjens’ results.

With the World Series well underway, I’m going to start taking a look at how teams did in 2009 as we ramp up for the 2010 RotoRob MLB Draft Kit.

The Atlanta Braves had a lot of things go right in 2009. Paced by Jair Jurrjens and Javier Vasquez, the rotation was back to being a major strength, leading the National League with 99 quality starts. In mid-September, the Braves went on a major run, winning 15 of 17 to pull within two games of the Wild Card lead.

Unfortunately, the prevailing memory of 2009 will be a final week collapse in which the team lost a season-worst six games, including getting swept by the woeful Nats, eliminating any hopes of getting back to the playoffs for the first time since 2005.

The Braves did enjoy a 14-game improvement to finish 86-76, good for third place in the NL East after a fourth-place showing in 2008, but there are plenty of concerns heading into 2010.

Team speed needs to be addressed; when Matt Diaz – yes, Matt Diaz, who had never stolen more than five bases in a season prior to 2009 — is your leading basestealer, you know that’s not a team strength.

How much does Chipper Jones have left in the tank is another worry. Jones endured an 0-for-19 slump in the final week to finish at a career-worst .264 (exactly 100 points below his 2008 average, which won him a batting title). But he’s still a dangerous power hitter, right? Uh, maybe not. Jones’ streak of 14 straight seasons of 20 homers or more to begin his career – a record he shares with another great third baseman, Eddie Mathews – was snapped.

Another concern the team faces is lagging attendance. Yes, the economy could very well be responsible, but it’s surprising that such an improved team would suffer a 12 per cent decline in attendance, drawing their lowest numbers of fans since 2003.

And 2010, regardless of the outcome, will truly be the end of an era as Bobby Cox has declared that he will retire at the end of next season. Wouldn’t it be perfect if he could go out a winner?

The Braves are no longer one of the biggest spenders in the game, but they aren’t the Florida Marlins, either. Atlanta is about to sign Tim Hudson – who made a very successful return in September from Tommy John surgery – to a three-year extension, a move that will help solidify the rotation for the next few seasons. Hudson is 34, but his impressive work down the stretch proved he still has plenty left to offer.

Before Hudson’s return, one of the key members of the rotation in the first half was Derek Lowe, but we started warning you to sell high fairly early in the season. He still looked like a top 25 starter when we did our SP rankings in late June, but Lowe was simply ugly down the stretch, recording a 5.05 ERA with a .335 BAA after the break. Owners will look at that nice 15-10 record – the fourth time Lowe has earned 15 or more wins – and think that they’re getting a quality starter, but don’t be fooled.

The Braves already have five starters under contract for 2010, so Vazquez could be dealt this offseason as the team looks to beef up the attack. That would still leave Lowe as the No. 4 starter for 2010, but I’d be very wary of drafting him too early next Spring.

Speaking of beefing up the attack, while Diaz’s dozen steals were a nice bonus for owners, it was his hitting prowess that was most impressive. In fact, no NL right fielder who had at least 100 plate appearances put up a higher BA or on-base percentage than Diaz. His massively improved ability to draw a walk made him a legitimate fantasy option, especially in leagues where OBP counts. Diaz has always hit lefties well, but this season’s .412 BA/1104 OPS against them was just sick. And after struggling severely vs. righties last year (.159 BA), Diaz was more than passable (.255) against them in 2009.

Of course, the Braves have more outfield help on the way in the form of Jason Heyward, considered the best prospect in the game. However, a leg injury has forced him out of the AFL, which is unfortunate, because the Braves hoped to find out if he was ready for a job in the big leagues. Even so, this kid could very well be starting for Atlanta at some point next season. Expect him to provide some much-needed power for the Braves; his upside is off the charts.

In the infield, Martin Prado is a good sleeper candidate. He took over the keystone corner from the struggling Kelly Johnson, and will be the everyday second baseman for Atlanta in 2010. He’s a proven .300 hitter, and could approach 20 homers as he enters his prime power years.

The bullpen wasn’t as good as the rotation, but it wasn’t chopped liver, either, ranking fifth in the NL in ERA. That’s even more impressive when you consider that Jorge Campillo – who made 25 starts for the Braves in 2008 and was pretty darned good at times — missed most of the season with rotator cuff problems. He was a candidate for the fifth starter job this Spring, but wound up pitching only out of the bullpen for the brief time he was healthy. Campillo has since been removed from the 40-man roster, so it’s doubtful he’s in the team’s plans for 2010.

One of the nicest surprises out of the bullpen was the performance of workhorse Peter Moylan. Not only did the Aussie break the team record for appearances in a season with 87, but the groundball specialist was extremely effective, inducing a dozen double plays and going the entire season without yielding a single long ball.

Overall for the Braves, this was a fine rebound season that was somewhat tainted by a very crappy final week.

By RotoRob
Tags: Atlanta Braves
This entry was posted on Friday, October 30th, 2009 at 3:26 pm and is filed under BASEBALL, RotoRob, Team report. You can follow any responses to this entry through the RSS 2.0 feed. Both comments and pings are currently closed.