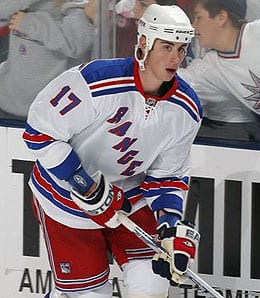 Brandon Dubinsky is lighting it up on Broadway.

Ah, nothing like early season success to make everyone get all delusional about who’s going to have a dynamite season, right? Here’s a hint — while Alexander Ovechkin will have a great year, he’s not going to keep up his pace for 200+ points. This season’s seen its share of fast starts, and here’s a handful of guys that might still be available in your Fantasy league:

Brandon Dubinsky: I’m guessing Glen Sather’s happy he got Dubinsky signed in time for the season (with an assist to John Tortorella for insisting that the deal gets done). While off the radar for most “top-line centre” lists, Dubinsky’s shown immediate dynamite chemistry with Marian Gaborik and has provided a much-needed reliable scoring spark to the Rangers. How long will it last? Well that depends on…

Marian Gaborik: Okay, so every Fantasy guide on the planet mocked Gaborik for basically being as durable as a paper doll. I guess, then, we owe him some props for performing beyond expectations while healthy. Sure, go ahead and insert your own joke about the ticking injury time bomb. Many Fantasy owners have stayed away from Gaborik and, depending on the size of your league, he may be available. If so, get him, let him play out a few games, then stick him on the trade market — I still don’t trust him.

Radim Vrbata: Vrbata’s upside is 25 goals, but, as a streaky scorer, you might as well ride him while the Coyotes are playing well. He’s getting plenty of ice time for new coach Dave Tippett (17-19 minutes) and the guy loves to shoot the puck. If his head and heart are in the game, then Vrbata might be a sneaky depth player.

Keith Tkachuk/Paul Kariya: Check the calendar to make sure it’s not 1998 as Kariya and Tkachuk are pretending that the last decade didn’t happen. On a line together with Brad Boyes, these veteran wingers are showing that they still have it. Kariya is recovering from double hip surgery, but appears to be suffering no ill effects, while Tkachuk is playing with a chip on his shoulder (that’s a good thing). Will they keep it up for the whole season? It’s hard to say at their age, though Tkachuk’s rough-and-tumble game seems like it’ll take a harder toll on him.

Steven Stamkos: Wow, so Barry Melrose thought this guy needed a few years to be NHL ready? If you’ve caught any Lightning games so far, you can tell that Stamkos is playing as well — if not better — than All-Star teammates Vincent Lecavalier and Martin St. Louis. Part of it is speed and skill, but a big part of it is confidence — Stamkos knows he can compete at an elite level now. Because he only played well in the second half of last season, he fell in the rankings and he might still be available for centre depth.

Matt Carle: On his third team in just over a year, Carle’s getting plenty of power play minutes in Philadelphia. Is it his natural skill that’s shining through early in the season or is it a little boost coming from playing next to Chris Pronger? Who knows, though it’s difficult to tell whether or not Carle will sustain this for the long haul (hint: trade him when his value peaks).

Craig Anderson: The Avalanche goaltender might be battling a slight groin injury, but he’s already got overzealous fans in Denver calling him MVP. Let’s not go that far yet. His gaudy early-season numbers (1.00 GAA) will certainly raise eyebrows and it’ll also keep Peter Budaj (and his awesome Ned Flanders helmet) on the bench for a long, long time (son of a diddly!). At least, that is, until Anderson’s groin injury gets serious. Still, here’s betting the Avs come back down to earth, and with them, so will Anderson’s wins (his save percentage should be high, though).

Ilya Bryzgalov: Break up the Coyotes (no, not bankrupt the Coyotes), they’re off to a solid start. GM Don Maloney’s talked about how his team’s success needs to start in net, and Bryzgalov’s erratic season last year essentially torpedoed what was a squad battling for home ice at the All-Star break (really, they were — look it up if you don’t believe me). Two good games doesn’t qualify as a bounce-back season, but you’d rather have a good start than a bad one.

And now some injury notes:

Montreal loses its best defenseman in Andrei Markov, then signs Marc-Andre Bergeron in hopes of replacing Markov’s offense. We’ll give you an A for effort on that one, but somehow signing an in-limbo guy to replace the second-leading blueliner from last season seems to be a bit much. If you need someone who’s going to get a shot at power play time, Bergeron’s not a bad depth pick up. Someone has to fill those minutes up.

After getting Dany Heatley, San Jose locked in its second line with perennial All-Star Patrick Marleau playing next to emerging stars Joe Pavelski and Ryane Clowe. Pavelski suffered an undisclosed lower-body injury blocking a shot in the season opener against Colorado and had surgery a few days later. He’s out for a few weeks, which means it’s up to Marleau to carry the line by himself as Clowe hasn’t done anything yet.

On-again, off-again winger Erik Cole started the season the worst way possible — with a long-term injury. It’s not that much of a Fantasy hit, though, as Cole hasn’t put up the same numbers since coming back from his scary neck injury in 2006, so don’t fret this one too much if you have guys like Eric Staal on your team.

By Mike Chen
This entry was posted on Saturday, October 10th, 2009 at 2:32 pm and is filed under HOCKEY, Ice Chips, Mike Chen. You can follow any responses to this entry through the RSS 2.0 feed. You can leave a response, or trackback from your own site.