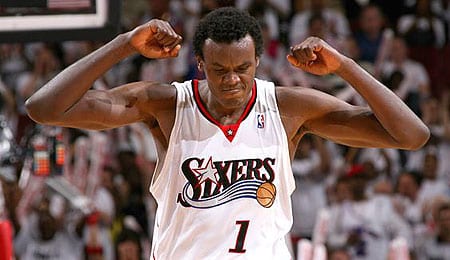 We’re back with another team preview as part of the unstoppable beast that is the 2009-10 RotoRob NBA Draft Kit. While you’re wondering what the new NBA social media rules will entail, let’s check in on the Philadelphia 76ers, who are seeking their first winning season since 2004-05.

The Philadelphia 76ers were an ill-constructed team last year. Big free agent signee Elton Brand was hurt for most of the season and did not fit when he was around into the go-go offence directed by the now-departed Andre Miller. Need proof? The Sixers had a better record without him than with him. Centre Samuel Dalembert should have thrived in Brand’s absence, but he looked out of place more often than ever. His obvious lack of interest culminated at season’s end when he asked for a trade. And while others showed sparks, Philly was a frustratingly inconsistent team.

This year there’s hope Brand can become the dominating presence that has seen him average more than 20 points and 10 rebounds a game during his career (and that includes his disastrous totals last year). The reason for such optimism? New coach Eddie Jordan is bringing in the Princeton offensive scheme, which relies on constant motion, pick and rolls, back-door cuts and disciplined teamwork, and that could allow Brand to become a force near the basket if everyone sticks to the game plan.

That means Andre Iguodala will have to post up and drive to the basket more often, point guard Lou Williams will have to show the ability to break down defenders and Dalembert will have to be happy setting screens for others to score. Ideally, all five players in the Princeton offence should be able to shoot the three—something Brand and Dalembert can’t do (neither could Miller, for that matter). But newly acquired Jason Kapono and Rodney Carney should make the Sixers a better three-point shooting team overall.

In the weak Eastern Conference the 76ers may have enough to stay in the playoff chase throughout the year, but if Brand or especially Iguodala are out for any length of time, Philly will likely find itself on the outside looking in.

There are surprisingly few battles for a team that just scraped into the playoffs. The starting five is set and there’s not much strength once you get past them. Rookie Jrue Holiday (UCLA) will probably get some time as the back-up point guard since Williams isn’t exactly the second coming of Jason Kidd. In fact, Williams, who is more of a shooting guard, has never started in his four-year NBA career with the Sixers. Free agent signee Primoz Brezec, Smith, recovering from a torn ACL, and Speights may take minutes away from Dalembert, but likely won’t start—at least at the beginning.

A bit of a toss-up here if Brand returns to form, but Iguodala is probably the safer choice since he can fill up more columns on the stat sheet. Last year, Iggy averaged 18.8 points, 5.7 rebounds, 5.3 assists and 1.6 steals—numbers that have been fairly consistent over the past three seasons—and he should be able to repeat that performance in the new offence.

Dalembert asked to be traded at year-end, but his albatross of a contract (two years and $25 million remaining plus a $3.75-million trade bonus upfront) made it impossible to move this Canadian. Two years ago, Dalembert was a solid double-double man (10.5 points and 10.4 rebounds), but last year his production dropped to 6.4 points and 8.5 rebounds. Those are not numbers most teams want to see from a starting centre unless he’s a defensive specialist, which Dalembert is not. Dalembert can be a decent shot blocker, but needs to realize his place on the team is to play some D and allow others to score.

Williams averaged 12.8 points, three assists and two rebounds in 23.7 MPG last year, all numbers that are bound to increase now that he is a starter. In Brand and Iguodala, Williams has two teammates who can score in buckets, and the new offense emphasizes passing and teamwork, always good for assist totals.

Holiday has apparently impressed the Sixers with his defensive acumen during scrimmages, which is good since his offensive skills are a work in progress. In his first and only year at UCLA, he averaged 8.5 points, 3.8 rebounds and 3.7 assists so he has plenty to learn. The Sixers also invited former Temple swingman Dionte Christmas to camp, but it would be surprising if he makes the team, even though coach Jordan says he has a legitimate chance.

With Miller gone to Portland, can Iguodala become an elite NBA player and how will he adapt to being the team’s undisputed leader? He’s a good basketball player to be sure, but can he be a great basketball player? Can the Princeton offence work for the Sixers and Brand? Coach Jordan’s last team, the Washington Wizards, weren’t exactly a powerhouse. Which Dalembert will show up to camp? The one who was kicked off the Canadian Olympic team last summer and followed it up with a disappointing season? Or a more humble player who can handle not being the first, second, third or even the fourth go-to option on the team?

By Andy Holloway
This entry was posted on Tuesday, September 29th, 2009 at 11:52 am and is filed under 2009-10 RotoRob NBA Draft Kit, BASKETBALL, RotoRob correspondent report, Team report. You can follow any responses to this entry through the RSS 2.0 feed. You can skip to the end and leave a response. Pinging is currently not allowed.