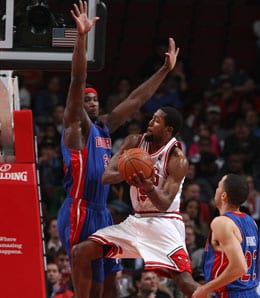 John Salmons (middle) could be a monster for the Bulls this season.

Like a Tsunami, the 2009-10 RotoRob NBA Draft Kit rolls on with another team preview. While Chris Bosh owners cringe at the prospect of him already hurting and possibly missing some of training camp, let’s turn our attention to the Chicago Bulls, who will try to build on a near upset of the Boston Celtics in a classic first round battle in last season’s playoffs.

Da Bulls took a step forward last year in their attempt to return to the glory years by finishing .500 after collapsing the previous year to just 33 wins. Since then, leading scorer Ben Gordon signed with the Devil, i.e., the Detroit Pistons, as a free agent. Losing your top point-getter is usually not a good thing, but the Bulls might be better off. For one thing, Gordon is an undersized shooting guard whose defensive abilities are highly suspect. For another, last year’s rookie of the year, Derrick Rose, is on the verge of superstardom, and his teammates are vastly different than the ones who came out of the gate last season with a thud.

Aside from Gordon, the Bulls dispatched Andres Nocioni, Drew Gooden, Cedric Simmons, Michael Ruffin, Larry Hughes and Thabo Sefolosha mid-season and brought in Brad Miller and John Salmons (as well as a lot of salary cap ballast), both of whom are expected to start in their respective positions. The newly configured team put on a push into the playoffs where they almost upset the Boston Celtics in the first round. The series went seven games with four of them going into overtime (including a double OT game and a triple OT contest). In the first game, Rose potted 36 points (plus 11 assists) to tie the great Kareem Abdul-Jabbar’s record for most points in a playoff debut by a rookie.

If Rose and the Bulls can continue that kind of play they should be a lock to make the playoffs, although they will not challenge the Cleveland Cavaliers for the division. One potential pitfall is the health of forward Luol Deng, whose season ended in February with a serious stress fracture in his right shin that has taken longer to heal than expected. Deng says he will be ready for the October 6 pre-season opener, but the Bulls need him to return to his 2006 form if they’re going to be anything more than a middling team.

The starting five lineup is mostly set with Hinrich as the all-important sixth man, although there are some whispers that Noah could unseat Miller as the starting centre. Two rookies, forward James Johnson (Wake Forest) and power forward Taj Gibson (USC), will battle for minutes since the Bulls aren’t very deep. Indeed, the team will probably keep just 13 players and that’s including centre Jerome James, who is currently hurt (what a shock), and guard Lindsey Hunter, who is expected to be more of a coach than a player.

The Bulls have pegged their fortunes on Rose, the hometown phenom who led all rookies with 6.3 assists per game and was second in scoring with 16.8 points. He also chipped in 3.9 rebounds a game. Rose may not be the first point guard you’d pick, but he should be good for 20 points and a couple more assists per game as the Bulls’ first true cornerstone since Michael Jordan.

With a retooled lineup it may be tempting to bank on Deng returning to the numbers he put up in 2006-07 (18.8 points and 7.1 rebounds), but he’s recovering from a serious leg injury and will get some competition for scoring opportunities from Salmons, who last year put up career numbers (18.3 points, 4.2 rebounds and 3.2 assists) as his playing time increased. Deng is only 24 so he should be resilient enough to bounce back, but his numbers declined in both 2007-08 and 2008-09, when he posted just 14.1 points and 6 rebounds a game. Since Gordon is gone, both Deng and Salmons are expected to start.

Thomas showed signs of life last year (10.9 points, 6.4 rebounds) and is entering a contract year, but sixth man Hinrich, finally healthy, might be the better bet. With Gordon out of the picture, Hinrich will get more time at shooting guard, which should improve the career-low totals (9.9 points, 3.9 assists and 2.4 rebounds) he achieved last year when his production was limited by a hurt thumb.

Both Johnson and Gibson should make the team, but likely won’t get a lot of minutes unless there are injures. Gibson is a defensive specialist while Johnson showed some offensive flair at Wake.

Pargo is no replacement for Gordon, but he doesn’t have to be since the keys to the offence have been given to Rose, who must avoid a sophomore slump if the Bulls are going anywhere. Deng has to return to good health and put up numbers similar to that which he posted in 2006, unless Salmons can pick up the slack. Coach Vinny Del Negro is now in his second year on the job and has nearly a completely different team than he had to start last year. How he handles the budding Rose will be a key to his continued employment.

By Andy Holloway
This entry was posted on Wednesday, September 30th, 2009 at 10:37 am and is filed under 2009-10 RotoRob NBA Draft Kit, BASKETBALL, RotoRob correspondent report, Team report. You can follow any responses to this entry through the RSS 2.0 feed. You can skip to the end and leave a response. Pinging is currently not allowed.