Dear RotoRob: Which QB Should I Start? 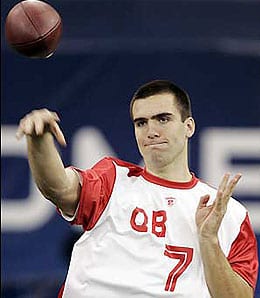 Joe Flacco will surprise people this year, but we’d still start Matt Schaub over him this week.

Re: QB Selection in Week Three

Matt Schuab or Joe Flacco? I am in a head-to-head pool and have started the wrong guy in both weeks thus far. Now that they have each had a stellar week, I am unsure as to whom to plug in for Week Three. Can you help?

I think Flacco is really going to sneak up on some people this season, and there will be weeks when he could start over a lot of “regular” Fantasy starters. That being said, I don’t think this is one of those weeks: Cleveland has been terrible against the run so far (205 YPG against).

I think the Ravens will pound the rock all day Sunday, and I don’t see big numbers from Flacco as a result.

Andre Johnson has struggled against the Jags lately, and Rashean Mathis is a tough cover corner (look at Larry Fitzgerald’s numbers from last week). As a team, though, J-Ville is soft against the pass, and Houston’s lack of a running game (at least so far) and crummy defense leads me to believe that this game could be a shootout. Schaub probably won’t go off like last week, but he should put up solid numbers against the Jags.

By Buck Davidson
Tags: Joe Flacco
This entry was posted on Saturday, September 26th, 2009 at 11:01 am and is filed under Buck Davidson, Dear RotoRob, FOOTBALL. You can follow any responses to this entry through the RSS 2.0 feed. Both comments and pings are currently closed.