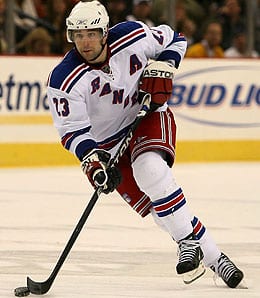 Waiting for Chris Drury to break out this season? Don’t bet on it.

BY CHRIS WASSEL and MIKE CHEN

Today, we wrap up the 2009-10 RotoRob NHL Draft Kit. While we say goodbye to the retiring Olaf Kolzig, we also bid adieu to our draft kit by bringing you our picks for this season’s busts. Our in-season hockey coverage will start shortly, and in the meantime, we wish you well in your draft.

Inevitably, there comes a time when you have to attach the word “bust” to a player. It is not something to take lightly as many know. Mike and I came up with a list of 10. I then added one more out of necessity to stir the pot a bit. I admit I may get in trouble with this one, but oh well.

Chris Drury, LW, New York Rangers: Some people still believe that Drury will break through for the Rangers under their current configuration. They look at John Tortorella and the infusion of new forwards and think it’s a recipe for success. Those folks are delusional; we’ve said it time and again here at RotoRob.com — Drury’s never broken 70 points in the NHL. Repeat: Drury’s never broken 70 points in the NHL. Let’s leave it at that. Now the B Side. Drury is a nice story. He scores pretty well and all, but he is nowhere near woth $7 million a year. He certainly is not a Fantasy stud and people need to realize this. This is a cold reality, but Todd White was a better Fantasy option than Drury last year.

Phil Kessel, RW, Toronto Maple Leafs: Point No. 1 — Kessel won’t play until December. Point No. 2 — Kessel won’t be in game shape until probably early January. Point No. 3 — Kessel’s new team is a lot worse than his old team. Look for him to hit the 30+ goal mark again next season, not this upcoming season. B Side time. Kessel will score close to 30, but ironically will get more assists than goals this year yet is not a Fantasy stud! Please take note of this, you people who took Kessel in the fourth round despite him being out until about Thanksgiving (in the U.S., that is). If only people used a little common sense when drafting guys with attitude problems.

Pascal Leclaire, G, Ottawa Senators: Was Leclaire’s success a function of a successful Ken Hitchcock defensive scheme or was it Leclaire’s own raw talent? Either way, there’s a chance that (a) Leclaire will get injured; and (b) he won’t have as defensively sound a team in front of him as he did under Hitchcock. Grab him if you’re in desperate need of a starting goalie, but don’t expect him to be a diamond in the rough. B Side time. To make this short and sweet, I like Leclaire a lot actually, but he is not going to win 30 games either. He will need to be spelled by Brian Elliott. That is the sad reality of people thinking Leclaire will bounce back. He has not shown the ability to start 65 games. Get back to me when he does.

Marian Gaborik, RW, New York Rangers: Gaborik was held out of the early days of training camp with a sore groin. Enough said. B Side time. Gaborik is simply an injury waiting to happen. He’s a great player, but the worry and agony of every Fantasy hockey owner just screams bust at some point.

Milan Michalek, RW, Ottawa Senators: Early pre-season lines have Michalek lining up with Daniel Alfredsson and Jason Spezza. Will Michalek fulfill his potential as a speedy two-way scoring threat? Probably not; if he couldn’t do it playing with Joe Thornton and Patrick Marleau, then it’s not like it’s a linemate-dependant variable. Instead, it’s up to Michalek to decide whether he wants to become a critical top-line player or a semi-consistent secondary scorer. Bet on the latter, not that there’s anything wrong with that. (Unless you’re making $4 million a year — oh wait a sec…). B Side time. Simply put, Michalek has more talent than he will ever show. It is like potential unrealized and it is a shame. He makes too much money and does too little at times. The inconsistency will continue and drive people batty all year. Trade now…I repeat, trade now!

Ryane Clowe, RW, San Jose Sharks: The big right winger scored a big contract in the offseason; unfortunately, he hasn’t really scored any big goals to earn it. Clowe will look like a world beater one minute — crashing and banging his way to make the ugly goal happen against all odds — then he’ll just look out of position and slow the next. He’s extremely streaky too, which could work to your advantage. If you do pick him, unload him on a hot streak when he looks like he’s finally fulfilling his potential. B Side time. Simply, as Mike said, sell high when you can. Clowe can pop in 15 points in a 10-game span then go scoreless for 10. He did break out last year, but fizzled at times like a dying star. My father once told me if it’s too streaky then stay away from it until later.

Todd Bertuzzi, RW, Detroit Red Wings: It can be awfully tempting to pick up Bertuzzi, especially when early word out of Detroit had him skating alongside Henrik Zetterberg. Don’t buy into it. While the signing of Bertuzzi is relatively low-risk for GM Ken Holland in the real world (he’s cheap and only there for one year), the Fantasy world only cares about stats. Bertuzzi’s a shadow of his former self, injury plagued and a step slower. Pick him up only if you want a name guy popping in 10 goals. B Side time. All I can say is this — the first stint did not work. Why would the second time around be any better? Steer clear and run like a bat out of hell. Do not touch. Do not open until after Christmas or later. I can think of at least 250 players better at this point. Thank you.

John Tavares, C, New York Islanders: Not every highly touted Canadian prospect can have a rookie year like Sidney Crosby’s — just ask Steven Stamkos about that. Tavares won’t face quite as volatile a situation as Stamkos did in Tampa Bay (but there’s potential for it to be close), yet that doesn’t mean that he won’t necessarily have a similar learning curve. Stamkos didn’t blossom until the second half of the season once the hangover of Barry Melrose’s disastrous coaching tenure wore off; it’s safe to say that Tavares is in better hands, but banking on immediate success is a bit risky (unless you’re in a keeper league; then go ahead and grab him). B Side time. Grab him in keeper leagues…period! Tavares will not make the impact you expect now, but he will score some. He’ll be above Stamkos points-wise, but nowhere near Crosby. So maybe 60 points at best? That would not be bad at all. Even Stamkos would be proud and not end up on a milk carton somewhere.

Chris Mason, G, St. Louis Blues: In his two seasons with more than 50 games played, Mason’s had one great year and one terrible year. Which Mason will show up this season for the Blues, the one with the .916 save percentage or the one with the 2.90 goals against? History isn’t exactly on Mason’s side, and at 33 years old, it’s a bit late for him to be finally finding consistency in his game. B Side time. I have one line for this guy and it’s only draft him if nothing else is out there. Otherwise, draft Scott Clemmensen.

Mikael Samuelsson, RW, Vancouver Canucks: Samuelsson gets a lot of attention, mostly because he’s played second fiddle on some pretty darn successful Red Wing teams. While 15 goals isn’t anything to scoff at for us mere mortals (or beer leaguers), it’s not exactly noteworthy by NHL standards. Lured away from Detroit with a pretty substantial contract, Samuelsson went to the land of Swedes (or former land of Swedes, as Mats Sundin and Mattias Ohlund left Vancouver, leaving only the Sedin twins and Alex Edler) in search of a new start to his career. Here’s what you need to know: Samuelsson’s broken 20 goals once in his career, he’s 32 years old, and his new team doesn’t have anywhere near the firepower of his old team. B Side time. Samuelsson is not getting any younger. If you drafted him early, oh god, you wasted a pick! He’ll get 15 goals at best this year but maybe more assists. Just call 911 and turn yourself in to the Fantasy hockey police now.

Dany Heatley, RW, San Jose Sharks: Now, at first you will say I am nuts, buut just hear me out. Heatley does not produce in March and April — a period which is usually your Fantasy hockey playoffs. If you need scoring at that time, you could pick better options. The guy vanishes then and San Jose is going to find out the hard way yet again that you do not trade for a superstar drama queen. I am sure Mike will love seeing this in print. But the reality is often served ice cold here. Until Heatley produces when it counts, he is a Fantasy playoff bust to me.

Thus ends our quest of bringing you the RotoRob Draft Kit. What did you think? What could we do better next year? Fire away, but of course save a beer for us. We are thirsty and poor and in need of refreshment. Thanks so much.

By Chris Wassel
This entry was posted on Wednesday, September 23rd, 2009 at 5:51 pm and is filed under 2009-10 RotoRob NHL Draft Kit, Busts, Chris Wassel, HOCKEY, Mike Chen. You can follow any responses to this entry through the RSS 2.0 feed. You can skip to the end and leave a response. Pinging is currently not allowed.