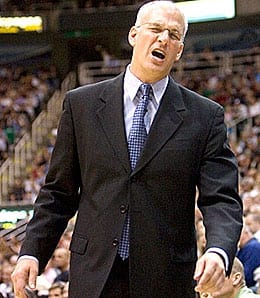 Can Jay Triano get a virtually new Raptor team to gel?

The 2009-10 RotoRob NBA Draft Kit continues today with yet another team preview. While we ponder what kind of shootout Delonte West was headed to, let’s check in on the Toronto Raptors, who will look to end their streak of two straight declining seasons.

While the Raptors were among the busiest NBA teams this offseason – GM Bryan Colangelo worked the phones like a schoolgirl with a credit card on a 976 chat line and spent MLSE’s money like a drunken sailor – it’s going to take some time to determine how improved they are – if at all, that is.

My money is on a beefed up Raptor squad. They showed signs late last year when interim coach Jay Triano guided the team to wins in nine of its past 13 games, getting rewarded with a three-year deal to stay on as the main man.

The biggest splash this offseason came when the Raps swung a multi-team deal and, as part of a sign-and-trade, wound up with SF Hedo Turkoglu from the Eastern Champion Magic. Turkoglu looked destined for Portland, but Colangelo pulled off a big deal to land the Turkish star in T.O. There are some who believe the team spent too much money on Turkoglu and the fact that he’s dealing with some knee issues is mildly concerning, but after such a strong playoff performance, he will clearly make this squad a more inventive and better offensive team.

However, it was defence that was the Raptors’ Achilles’ Heel last season, and whether they’ve improved enough in that department to turn back into a playoff calibre team is a reasonable question.

I can see this club getting back to within shouting distance of .500, but will that be enough to make it back to the postseason? I’m expecting the usual logjam from about sixth place to 10th place in the East, and with Washington bouncing back and returning to the mix, it will be that much harder for the Raptors to hop over enough teams to make the playoffs. Another factor is that, with such dramatic roster turnover, there could easily be a feeling-out period for this club. I wouldn’t be shocked if they started slowly and then enjoyed a big second half once this new group gels.

The 2009-10 campaign will be one of the most important seasons in Raptor history, as the future of franchise player Chris Bosh likely hinges upon how well they do this year. Part of the much-anticipated 2010 free agent class, CB4, many would have you believe, is all but packed and ready to join the Knicks in 2010-11, but if the Raptors show enough promise and close the distance between themselves and the Eastern powers, Bosh may be lured back into the fold.

Either way, he’s primed for a big season, having worked his ass off this summer to set himself up for a huge payday. He’s bulked up, happy with the team’s frenzied offseason of activity and is ready to turn in a dominating season. Now, if the team can just turn the corner along with him, something magical might happen.

One of the Raptor off-season moves that slid under the radar a bit was the deal that sent Carlos Delfino and Roko Ukic (the latter of which was made redundant with the signing of Jarrett Jack) to Milwaukee for Amir Johnson and Sonny Weems. I certainly don’t see Weems being a key rotation player in the near term, but sleeper searchers have to remember Johnson from last season in Detroit.

Is Johnson, still just 22, poised to take the next step this year? I’m a huge fan of his athletic ability and shot-blocking potential, and I think he could surprise the hell out of a lot of people this season. I’m not suggesting you draft him (especially considering he plays behind perennial All-Star Bosh), but if Johnson is given 20 MPG (and I believe he has as good a chance as any of the Raptors deeper on the bench to ultimately get a chance), he can be a shot blocking machine a la Chris Andersen, and he might even pitch in with some points and boards. Just watch.

The addition of Jack also can’t be minimized. One of the huge strengths of the Raptors two years ago was the T.J. Ford–Jose Calderon tandem running the point. With Ford gone last year, Calderon didn’t quite explode like many expected. In fairness, he did have a strong season, taking a larger role in the offense and even busting an NBA record along the way (by sinking a ridiculous 151-of-154 free throws, the Spanish Fly’s FT percentage of 98.1 set a new standard). With Jack aboard, the Raps again have a fearsome point guard duo, and I can even see the two of them playing together the way at times Jack did with Ford in Indy last season. The fact that Jack was a freshman at Georgia Tech at the same time as Bosh probably doesn’t hurt, either. Smart move, Colangelo.

There’s no doubt this is a deeper team than a year ago. Calderon goes down? No problem…Jack takes over. Bosh gets hurt? Johnson or Reggie Evans might be able to fill in, or Andrea Bargnani can slide over to the four and the sluggish but consistent Rasho Nesterovic can start at centre. Between rookie DeMar DeRozan and Antoine Wright, the wing positions should be well covered, too.

Belinelli looks like the man at SG to start the season, but he’ll have plenty of competition from both Wright and DeRozan. I’m expecting big things from Belinelli, who is stoked to be escaping the mess that is the Golden State rotation and joining the Raptors, where he will team with fellow Italian star Bargnani. Expect DeRozan to start his share of games as well, but I don’t see him logging the kind of PT that either Belinelli or Wright will receive – at least not at the outset.

Despite the fact that the roster has undergone such a huge overhaul, Bosh remains the straw that stirs the Raptors’ drink. He played pretty heavy minutes last season, and had a career high in PPG, but the fact that his FTA per game dropped for the second straight season suggests to me he wasn’t quite being as aggressive a player as he had been during his career year in 2006-07.

Now that he’s 33, we’ve seen the best that Nesterovic can offer, and that peak is now a few years in the rear view mirror. No longer a good shot blocker, Rasho has never been a player capable of logging heavy minutes or putting up much in the way of scoring. He’ll be an asset only in deeper leagues.

Belinelli is poised to be the starter at the two-guard, and he’s a name that hardcore Fantasy players are quite familiar with – mostly because of the frustration of watching him misused by Don Nelson in Golden State. Give this guy 28 minutes or so per game, and sit back and watch him put up around 12-14 points, a couple of treys and better than a steal per game. Still just 23, Belinelli has the chance to be a real threat from downtown, and if the rest of his game continues to develop, he has serious sleeper potential.

As mentioned above, I love Johnson, so I’m definitely keeping my eye on him, but with Evans and Patrick O’Bryant also added to the mix this year, minutes may be hard to come by.

DeRozan faces a crowded backcourt situation, but apparently, he may also see time at the three spelling Turkoglu. That will certainly help him get the minutes needed to be valuable. He’s a great enough athlete to handle multiple positions and his mid-range game is off the charts. On the flipside, DeRozan won’t help the Raptors’ defensive woes, and he may need to be pushed to reach his potential. Many think he’s a dark horse ROY candidate, especially after enjoying such a strong Summer League, but I’m worried he could become another Joey Graham type that frustrates with his inability to turn potential and physical gifts into results.

Can Turkoglu stay healthy and help turn the Raptors into one of the NBA’s better offensive clubs? Is Bosh headed for a career season in his walk year? What will Belinelli be capable of doing given starter-type minutes? Is this the year we get to see what Johnson can do? Is DeRozan a legitimate ROY candidate, or will he get buried on a deep Raptor bench?