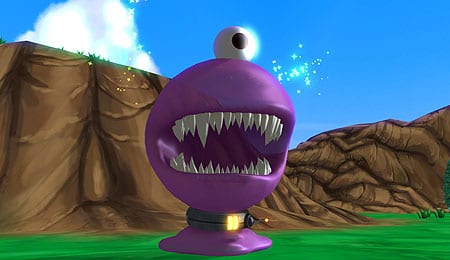 No arms, no legs…but one gigantic mouth.

After enjoying Splosion Man so much, I asked the good people at Twisted Pixel if I could get my hands on their first title…and they agreed. Originally released back in January, The Maw is another charming game starring a loveable purple blob that eats almost everything it comes into contact with. It does have a handful of technical hiccups that forced me to restart levels and it lacks the challenge of its successor, but The Maw is still a fun little title that is worth your time.

Instead of the aforementioned purple blob itself, you’ll instead be controlling an alien named Frank, who is tasked with guiding The Maw through the obstacles located in each level. The controls are fairly simple, though each button does account for multiple actions depending on when it’s used. For example, the A button makes Frank jump, but it’s also used to dodge projectiles as well as slam creatures on the ground once you’ve attached your beam (B) to them. In addition, Frank can also use the beam to spin and throw enemies (Y) or feed them (X) to The Maw itself. The X button also summons The Maw and attaches the beam to it so you can lead it around.

By keeping things basic, The Maw becomes a title that is instantly accessible to any skill level of gamer, something that is also accomplished by the cutesy design of the game.

Much as in Splosion Man, the graphics in The Maw aren’t going to be mistaken for cutting edge, yet they still do a very good job of conveying a whimsical mood. Pretty much all of the creatures in the game are slanted towards the cute side in the vein of a watered-down Viva Pinata, particularly the snuffles, which are dead ringers for the tarfly. Obviously, with names like snuffles, gloobers, puff-tors and yums, this isn’t a game that’ll be accused of taking itself too seriously anytime soon.

The main characters are both endearing with Frank being the tiny alien buddy to the ever expanding girth of The Maw, who looks pretty funny in all of its different iterations. Yes, it starts as a purple blob, but it’ll inherit the appearance and abilities of some of the creatures it consumes, which leads to some fairly humorous visuals. The backgrounds are also nice and colourful in the areas you can actually reach, though the rocks that surround the areas are pretty bland.

The audio in The Maw is a real treat. Frank’s voice is endearing, particularly when he’s calling for his buddy the way one calls for their dog, and The Maw itself makes a funny assortment of noises as it bumbles around. The soundtrack is also well done and fits the game perfectly.

Leading The Maw from Point A to Point B and overcoming the obstacles along the way is what this game is all about. He’ll start off small but will grow the more you feed him. Sometimes finding delicious sustenance for The Maw will be straightforward, while other times you’ll need to do some light exploring with Frank.

As mentioned above, The Maw has the ability to absorb the powers of other creatures by consuming them, which is central to keeping the gameplay feeling fresh. For example, it’ll eat a fire lizard called a “gastro,” which will give it the ability to breathe fire. From there it’ll be able to burn down trees, forcing scrumptious nums to come out of hiding and provide more food for The Maw. There are several fairly simplistic puzzles of this ilk to solve throughout the game, which once again speaks to its accessibility to gamers of all ages.

The Maw is not a difficult game, and with only eight levels you shouldn’t expect to spend more than three or four hours playing through it. On the bright side, each level is unique and the game never feels like it’s dragging. There are also achievements to be unlocked for finding and eating the snuffles on each level as well as devouring 100 per cent of the creatures — both of which should extend the experience a bit.

Plus, those that enjoy the game can download three additional levels, each priced at 100 points ($1.25). All three of the levels fit into the existing storyline and collectively serve to create what is essentially an “extended director’s cut” of the game.

While it doesn’t match Splosion Man in terms of value and lasting appeal, The Maw still manages to carve out a fun little niche that is playable by practically anyone with opposable thumbs. If nothing else, at least give the demo a shot to see just how charming Frank and The Maw are.

By Herija Green
This entry was posted on Friday, September 18th, 2009 at 3:39 pm and is filed under Herija Green, Video Game Reviews. You can follow any responses to this entry through the RSS 2.0 feed. You can leave a response, or trackback from your own site.